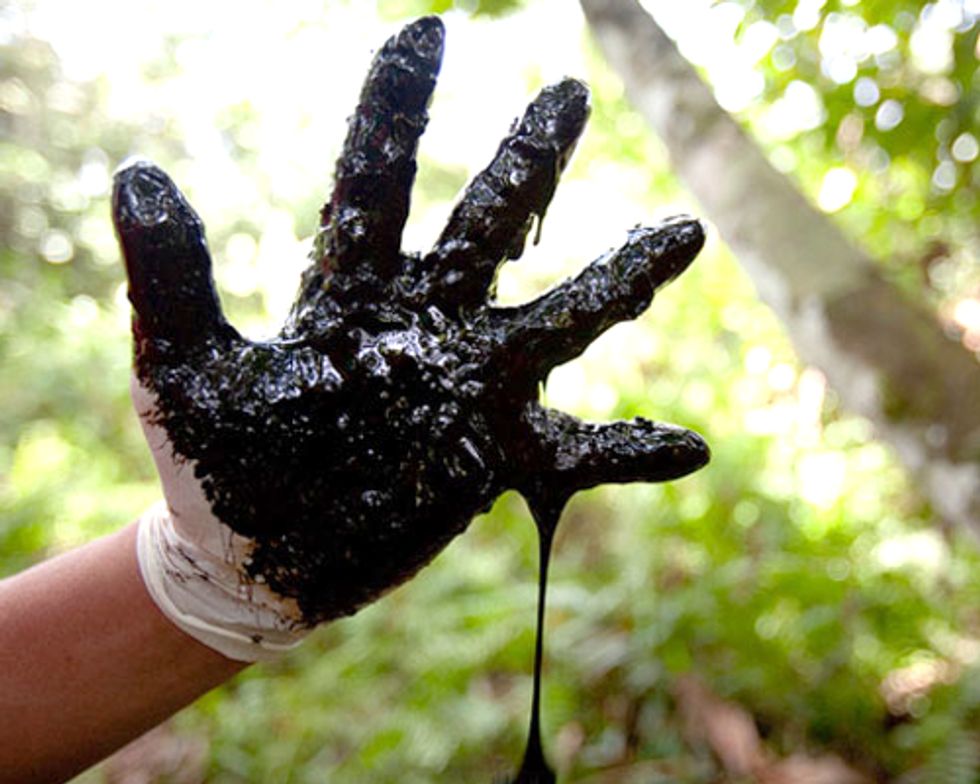 But have you heard of Hugo Camacho? Or Javier Piaguaje? They're not exactly household names. Nor gangster names for that matter. And that's because one is a campesino farmer that makes about $200 a month growing cacao. The other is a leader of the Secoya indigenous people, and both are from the rainforests of Ecuador's Amazon. Their crime? Suing the second largest oil company for the worst oil-related environmental disaster on the planet. And winning.

But starting today in a lower Manhattan courthouse, they are being accused using the same criminal statute under which the big crime bosses of our time have been prosecuted: Racketeer Influenced and Corrupt Organizations Act (RICO). It's the latest in Chevron's scorched earth campaign to avoid paying a record environmental verdict against the company for massive contamination stemming from its operations in Ecuador's Amazon between 1964 and 1990.

The implications of Chevron's tactics are immense and should send shivers down the spine of anyone concerned about justice, human rights, the environment or corporate responsibility. The U.S. oil giant has taken "blame the victim" to a new extreme in its attempt to avoid the $19 billion guilty verdict handed down by an Ecuadorian court in February 2012. Upheld on appeal, the verdict was based on much of Chevron's own evidence, and in a forum of Chevron's choosing. Chevron has no assets in Ecuador, and has thumbed its nose at the verdict, adding insult to injury for communities who have sought a clean up, clean water and funds for health care for 18 years. The affected communities are now forced to pursue Chevron assets around the globe in order to get the justice they deserve.

Piaguaje, Camacho and some 30,000 others first brought their lawsuit in 1993 in New York, using the Alien Tort Claims Act, a little-known law from 1789 that originally provided a forum for victims of transnational pirates in the home country of the pillagers. The case was brought in the state of New York because there, in White Plains, Texaco Petroleum Company developed an oil production system for its operations in Ecuador intentionally designed to pollute. Texaco calculated that, by using out-of-date technology and deliberately violating industry standards, it could save a couple of dollars per barrel.

A hand covered in crude from one of the hundreds of open toxic pits Chevron (formerly Texaco) abandoned in the Ecuadorean Amazon rainforest near Lago Agrio. Photo credit: Caroline Bennett / Rainforest Action Network

And pollute it did. Unlike a one-time spill such as the Exxon Valdez or BP Horizon spill in the Gulf of Mexico, Texaco's operations were systematically drilling and dumping 24/7 for almost three decades. Over those 28 years, it spilled some 18 billion gallons of toxic wastewater, and roughly 17 million gallons of crude. The region, once a pristine tropical rainforest and an idyllic home for five indigenous groups, became a wasteland of superfund-worthy waste pits, gas flares, hundreds of miles of oil-covered roads and zigzagging pipelines, and flow lines that dumped toxins directly into streams and rivers that local communities used to drink, bathe, fish and wash their clothes.

The company turned over operations in 1992 to state-run oil company Petroecuador. Given that the company's former concession—an area the size of Rhode Island—was an environmental free-fire zone and people were sick and dying, communities there filed suit. Texaco hoped to make it go away by conducting a sham "clean up", which was little more than pushing dirt on top of open waste pits.

Chevron bought Texaco in 2001, and assumed what was a known and growing liability. Chevron, as Texaco had for almost a decade, argued before New York courts that the case belonged in Ecuador, hoping to take advantage of its tremendous political sway over right-wing, business-friendly Ecuadorian governments. It submitted 12 affidavits attesting to the transparency and independence of Ecuador's judiciary.

In 2002, a judge remanded the case to Ecuador, and bound Chevron to abide by Ecuadorian jurisdiction and any decision that came from Ecuadorian courts. However, after plaintiffs refilled in 2003, Chevron immediately claimed Ecuador had no jurisdiction over the company. It met with government officials on ten different occasions trying to pressure Ecuador to quash the case, which the government rightly resisted given it's a suit brought by private citizens.

Crude contaminates an open toxic pool in the the Ecuadorean Amazon rainforest near Lago Agrio. It was abandoned by Texaco (now Chevron) after oil drilling operations ended in 1990 and was never remediated. Photo credit: Caroline Bennett / Rainforest Action Network

After almost ten years of litigation and more than 100,000 soil and water samples, Chevron was found guilty and ordered to pay $19 billion in damages. But here's the catch: Chevron knew from the get-go that it had an escape route. When the Second Circuit Court of Appeals for New York remanded the case to Ecuador, a caveat of Chevron's compliance with any judgment was if any type of fraud occurred. And that is what Chevron is conveniently now claiming. And fraud did occur alright, and many of Chevron employees should be in jail for engaging in it.

During the trial in Ecuador, Chevron:

More on Chevron's fraudulent actions can be found here. But, in an aberration of justice, much of this evidence, and all of the evidence of Chevron's contamination, won't be admissible in the RICO trial. In fact, there won't even be a jury. After forum shopping for several years, Chevron found an ally in Judge Lewis Kaplan, who had worked previously for a firm that represented Chevron. Kaplan actually invited Chevron to bring RICO charges. He has given the company everything it has asked for, except for a small handful of carefully orchestrated decisions denying minor Chevron motions in order to not be removed from the case for bias by the Court of Appeals. So Kaplan alone is judge and jury, and will surely give Chevron what it wants, as he has for the last three years in the run-up to the trial.

What's even more absurd is why a New York judge has taken it upon himself to decide whether an Ecuadorian court case was fairly adjudicated. A judge who speaks no Spanish and is unfamiliar with Ecuador's law or legal system—who has never even been to Ecuador—will be deciding this case completely on his own.

Chevron is on the lam, a fugitive from justice and doing whatever it can to avoid responsibility, including going after the very people whose lives it devastated, and anyone willing to support them. According to Chevron, people like Hugo and Javier are the criminals, while the company, tried and convicted, is the victim. But also included with Camacho and Piaguaje is Steven Donziger, a legal advisor to the plaintiffs. Achieving justice for the Ecuadorians has been his life's crusade, and he has worked with them for over twenty years.

But Chevron, armed with more than 60 legal firms, some 2,000 legal professionals, top PR companies, the shadowy "investigative and risk" management firm Kroll and endless resources, has tried to outlast and vanquish the Ecuadorians and their advocates like Donziger. Unable to put a pair of cement shoes on him and drop in the Hudson, Chevron has ironically gone after Donziger and the Ecuadorians with a statute that is better applied to the company itself. Is there a business more fitting of RICO charges than the oil industry?

The RICO case that begins today is a new low for the legal establishment. It goes down in the books alongside the Twinkie defense, among other ludicrous ways in which companies get off the hook for clearly punishable crimes and other travesties of justice. But at the end of the day, the trial is a sideshow, an attempt by the company to keep its investors from jumping ship.

The communities are actively pursuing Chevron assets in Argentina, Brazil and Canada, all countries where Chevron hopes to develop and secure new access to reserves that are its economic life blood. And a RICO verdict from a court with no jurisdiction over the Ecuadorian verdict or people will weigh little for most of the world. And that's bad news for Chevron, and good news for Hugo, Javier, and the other thousands of people who are waiting for justice to be served.