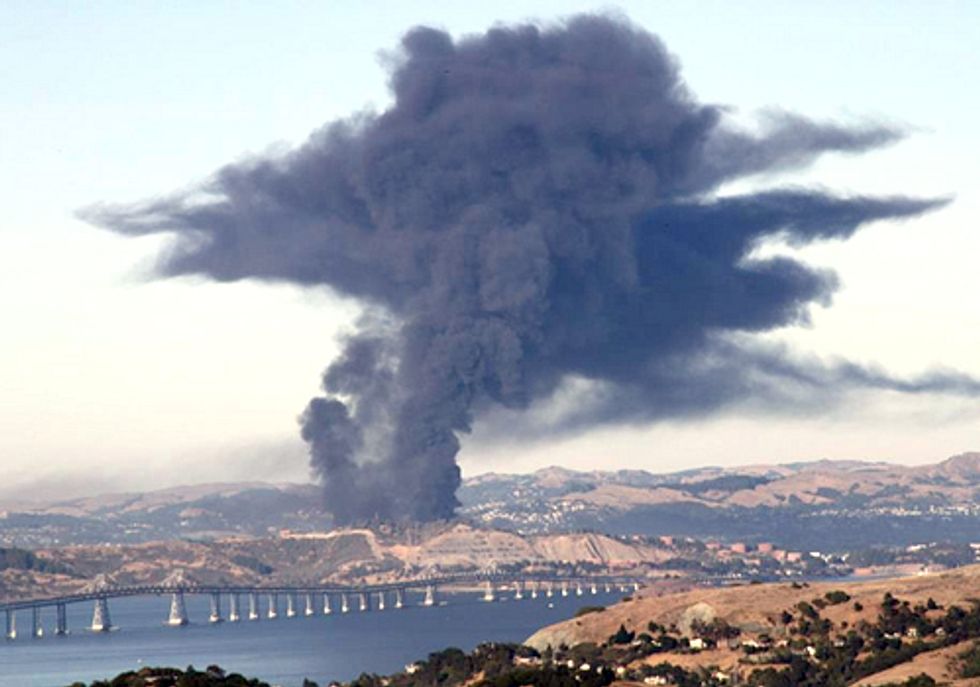 Smoke from the Chevron refinery explosion spreads across the bay. Photo by Drew Dellinger, a bay area resident.

The fire that engulfed Chevron’s refinery late on Aug. 6 in Richmond, California may now be extinguished, but worrying questions remain about the company’s ongoing safety record at the refinery.

The fire caused a huge toxic black cloud to sweep over the city and other parts of the San Francisco Bay area.

In the direct aftermath of the accident, nearly 1,000 people went to medical centers complaining of dizziness, eye irritation, shortness of breath and other breathing problems.

More than 130,000 residents were told to stay indoors with their windows closed.

And once again there is huge anger from the local community, of which more than 80 percent of residents are African Americans, who live with in the dangerous shadow of the refinery, which has had a long history of accidents and explosions.

On Aug. 7 that resentment and anger bubbled over as 500 residents crowded into a local hall for a meeting with the oil giant. Locals held signs that read “How many more ‘accidents’?” and “Chevron out of Richmond.”

According to the San Francisco Chronicle, the most often asked question at the meeting by local residents was “What are we breathing?”

However, they were getting few answers from either the company or local health officials. When Chevron refinery General Manager Nigel Hearne spoke, he was greeted with boos and catcalls of “liar!” He had to be escorted out of the hall by police.

One person who attended the meeting was local truck driver Greg McClain: “This stuff with Chevron has been going on as long as I remember,” he said. “Chevron never seems to get the message.”

Another person was General Haymon, who said there were years of frustration and accumulated anger against Chevron. “The more people who show up and the rowdier they are helps get the message across this cannot happen again,” Haymon said. “I don’t care how rowdy people get, these guys have got to get the message.”

The city’s mayor, Gayle McLaughlin, was also highly critical of Chevron. “The community of Richmond has borne the brunt of this major oil refinery,” she said. “We have borne the health impacts, borne the impact on our city’s image, and what they have given us is not nearly enough to compensate.”

Chevron, which has repeatedly apologized for the accident, is now facing questions as to what it did between the discovery of the small leak of oil, which was around 4:15 p.m. local time on Aug. 6, and 6:30 p.m., when the refinery unit ignited into a huge ball of fire and smoke.

Local union officials have said that Chevron should have acted immediately to shut down the crude unit. “From the time they did see the leak, they debated what to do,” Kim Nibarger, a refinery safety expert for the United Steelworkers union, who represents workers at the plant told the San Francisco Chronicle. “It was not so much whether to fix the leak, it was about what could they do to keep the line running and get it fixed.”

Chevron is not alone in having problems with its refinery. Data shows that for the last five years the number of refinery accidents in the U.S. has not improved.

Visit EcoWatch's ENERGY and AIR pages for more related news on this topic.