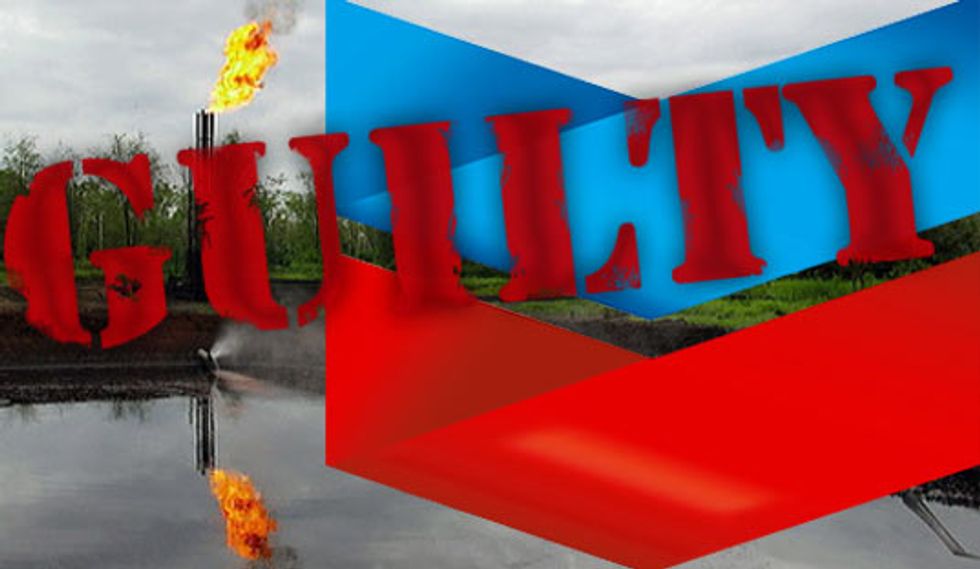 An Ecuadorian appellate court upheld a historic $18 billion award Jan. 2 against Chevron for the company’s deliberate contamination of the Ecuadorian Amazon. The decision is the largest environmental award ever handed down and the result of an 18-year legal battle brought by some 30,000 indigenous peoples and farmers seeking a clean-up of contaminated sites, clean drinking water and health care.

Amazon Watch and Rainforest Action Network, which have spent years fighting on the side of the Ecuadorians in their effort to hold Chevron accountable for these egregious environmental crimes and human rights abuses, released the following statement in response to the verdict:

“For a second time, in a jurisdiction of its own choosing, Chevron was found guilty of widespread oil contamination in Ecuador’s Amazon. It is a historic triumph for the thousands of victims who have suffered for over four decades from Chevron’s drill-and-dump practices.

“Yesterday’s ruling, based in large part on Chevron’s own evidence, once again proves that the company is responsible for deliberately dumping billions of gallons of toxic waste sludge into local streams and rivers, which thousands depend on for drinking, bathing and fishing, and created a public health crisis in the rainforest region.

“Chevron has spent more than a decade and hundreds of millions of dollars in a vain attempt to evade accountability and in doing so exacerbating the suffering of thousands of rainforest residents. The company says it will continue deploying its armies of lawyers with yet more legal stonewalling tactics, still hoping that its unlimited resources can outspend and outlast the course of justice. But the guilty verdict sends a loud and clear message—It is time for Chevron to clean up the Ecuadorian Amazon."

The Ecuador decision comes at a time when Chevron also faces criminal charges and fines up to U.S. $11 billion in Brazil for its negligence in its operations.  If convicted, the company will be permanently banned from doing business in the South American country.