Chevron Gets $2 Million Slap On Wrist for Refinery Fire 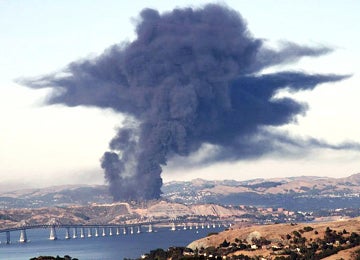 The multinational Chevron Corp. has been fined $2 million after accepting a plea bargain following an August 2012 fire at a Richmond, CA, refinery that sent 15,000 people to the hospital with complaints of breathing problems. 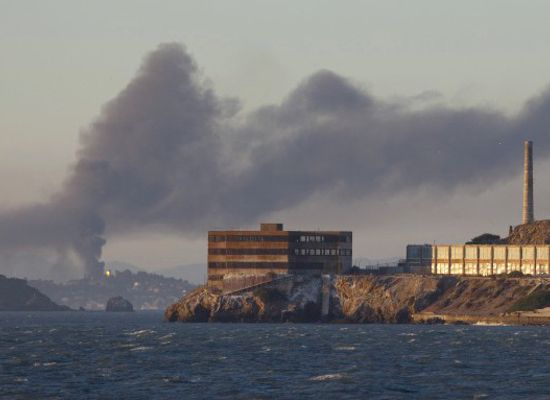 In this Aug. 6, 2012 photo, smoke pours from a fire at the Chevron Richmond Refinery, seen behind Alcatraz Island in San Francisco. Investigators found “willful violations” in Chevron Corp.’s response before, during and after the Aug. 6 fire in Richmond caused by an old, leaky pipe in one of the facility’s crude units. Photo credit: AP/Eric Risberg

Chevron attorneys pleaded not guilty to six charges, accepting the terms, which includes 3 1/2 years of probation, $1.28 million in fines and more than $720,000 in restitution payments to three different agencies, according to reports by The Reporter.

“This criminal case achieves our goals of holding Chevron accountable for their conduct, protecting the public and ensuring a safer work environment at the refinery,” said Contra Costa County District Attorney Mark Peterson in a news release.

Peterson praised Chevron for the company’s “commitment to do more than what is required by law to prevent future accidents.”

The fine and settlement come on the heels of a protest earlier this week on the anniversary of the fire. Roughly 1,000 people gathered August 6, to commemorate the incident and demand accountability.

Those gathered chanted, “Arrest Chevron,” in front of the refinery gates before police in riot gear moved in, arresting 208 protesters.

Richmond Mayor Gayle McLaughlin echoed the condemnation of protests, saying, “The community of Richmond does not deserve and will not stand for these kinds of toxic releases that impact our health and safety and also impact the sustainability of our planet,” reported Democracy Now.

Also in attendance was prominent environmentalist Bill McKibben, the founder of 350.org, which helped organize the protest.

“Everybody thought at first that if you have a problem this big that scientists said is a problem, then our system would act,” McKibben said. “That was my assumption. But at a certain point it became clear that wasn’t happening. The science was no match for the money. They’ve purchased the U.S. Congress.”

This fine is a slap on the wrist for Chevron, a multinational oil corporation with $241 billion in revenue last year. Like most oil companies, Chevron has a dubious safety record and has been responsible for several serious accidents in recent years.

The San Francisco Chronicle reports that an explosion at a Chevron refinery in Wales killed four workers and seriously injured one other during a June 2011 accident.

More recently, a January 2012 blowout and fire at a Chevron offshore natural-gas platform killed two men near Nigeria. The fire continued burning for 46 days, stopping only after the flow of natural gas dried up.

The Nigerian government announced that it will seek a $3 billion fine from Chevron as a result of the disaster, but there have been no reports of a settlement since the August 2012 announcement.

This claim pales in comparison to an unresolved $19 billion lawsuit filed by members of Ecuador’s indigenous Amazonian community after years of pollution in areas around Chevron drilling sites.

Years after the 2011 legal victory in an Ecuadorian court, Chevron has not paid the fine, nor has it offered compensation to the victims. Local residents claim that cancer rates have increased as a result of contaminated drinking water.