Chevron, ExxonMobil and Shell Say Climate Change is Real, So Why Haven’t They Dumped ALEC? 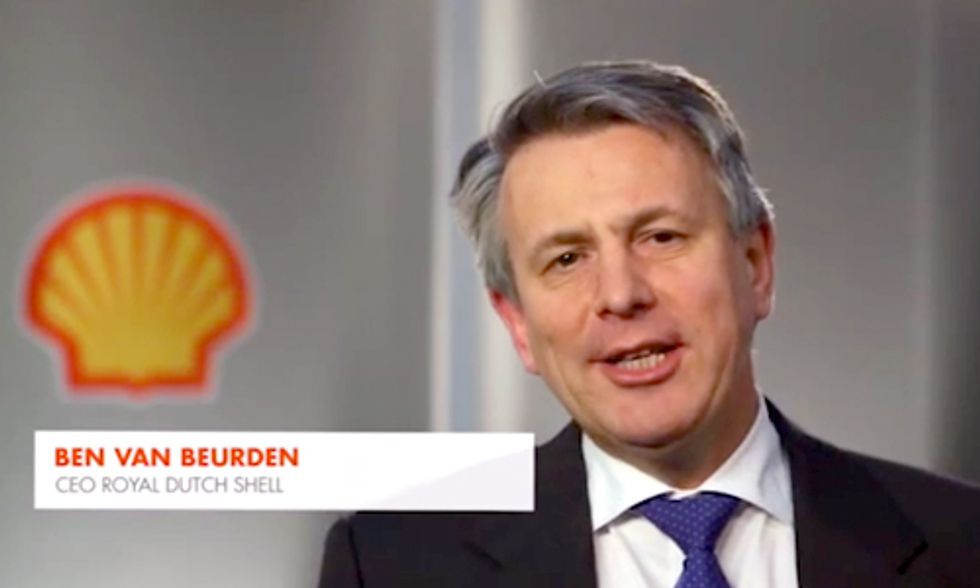 When Google Executive Chairman Eric Schmidt recently called out the American Legislative Exchange Council (ALEC) for "literally lying" about climate change and his company announced it would not renew its ALEC membership, it was just one of the conservative business lobby group's latest—and loudest—setbacks.

"Climate change is real and it's a threat that we want to act on. We're not aligning with skeptics," said Shell CEO Ben van Beurden. So why is Shell funding ALEC?

Thanks to pressure from shareholders, unions and public interest organizations, more than 90 companies have severed ties with ALEC since 2012, according to the nonprofit Center for Media and Democracy (CMD), which tracks the secretive group's activities on its ALEC Exposed website. The list of deserters comprises a veritable Who's Who of U.S. business, including Amazon, Bank of America, Coca-Cola, General Electric, General Motors, IBM, Kraft, McDonald's, Microsoft, Procter & Gamble and Wal-Mart. And in the days following Schmidt's denunciation of ALEC for "making the world a much worse place," other Internet companies headed for the exits. Yahoo cancelled its membership, Facebook said it was unlikely it would renew next year, and Yelp divulged it was no longer a member.

Since its inception in 1973, ALEC—which currently boasts more than 1,800 state legislators and nearly 300 corporations, trade associations, corporate law firms and nonprofits as members—has been promoting model state legislation on a range of issues, from "stand your ground" laws to privatizing prisons to worker rights. Nearly 98 percent of the group's funding comes from its corporate sector members, which pay annual dues of $7,000 to $25,000. Those fees grant them direct access to ALEC legislators—who each pay a token $50 a year—and the opportunity to ghostwrite sample bills that serve as templates for statehouses across the country.

Two of the companies—ExxonMobil and Koch Industries—are so gung ho that they've been kicking in significantly more than the annual fee. ExxonMobil donated $942,500 to ALEC over the last decade, while Koch family foundations gave $747,000 between 2007 and 2012. On top of that, the oil and gas industry's premier trade association, the American Petroleum Institute, contributed $88,000 between 2008 and 2010.

Given this support, it's not surprising that ALEC's sample bills would, among other things, impede government oversight on fracking, undermine regional cap-and-trade climate pacts and introduce climate misinformation in school curricula. Last year, according to CMD estimates, ALEC sponsored more than 75 energy bills in 34 states. Thirteen of those bills, if enacted, would have frozen, rolled back or repealed state standards requiring electric utilities to increase their use of renewable energy. Fortunately, all 13 went down in defeat.

What is surprising is five of the seven ALEC energy behemoths I listed above—all but Koch Industries and Peabody Energy—publicly acknowledge the threat posed by climate change on their respective websites and claim to be doing something about it.

BP, for example, states that the company "believes that climate change is an important long-term issue that justifies global action." Chevron says "taking prudent, practical and cost-effective action to address climate change risks is the right thing to do."

Duke Energy, meanwhile, maintains it is "committed to finding new ways to confront one of our industry's biggest challenges—global climate change." And ExxonMobil, which sits on ALEC's corporate board, asserts it "engage[s] with policymakers directly and through trade associations around the world to encourage sound policy solutions for addressing the risks of climate change."

Finally, Shell's website features a lengthy Q&A with the company's chief climate change adviser, David Hone, who explains the basics of climate science and then concedes: "Business can't solve the climate problem on its own. I think it's the role of companies like Shell—which has been a strong advocate of the core solutions since the late 1990s—to help identify possible solutions for policymakers."

Just a few weeks ago, Hone's boss, Shell CEO Ben van Beurden, amplified his company's position in an interview with the Washington Post. "Let me be very, very clear," van Beurden said. "For us, climate change is real and it's a threat that we want to act on. We're not aligning with skeptics."

If that's the case, why is Shell—or BP, Chevron, Duke Energy and ExxonMobil, for that matter—still an ALEC member?

Elliott Negin is a senior writer at the Union of Concerned Scientists. If you want to join UCS's campaign to persuade Shell to quit ALEC, click here.