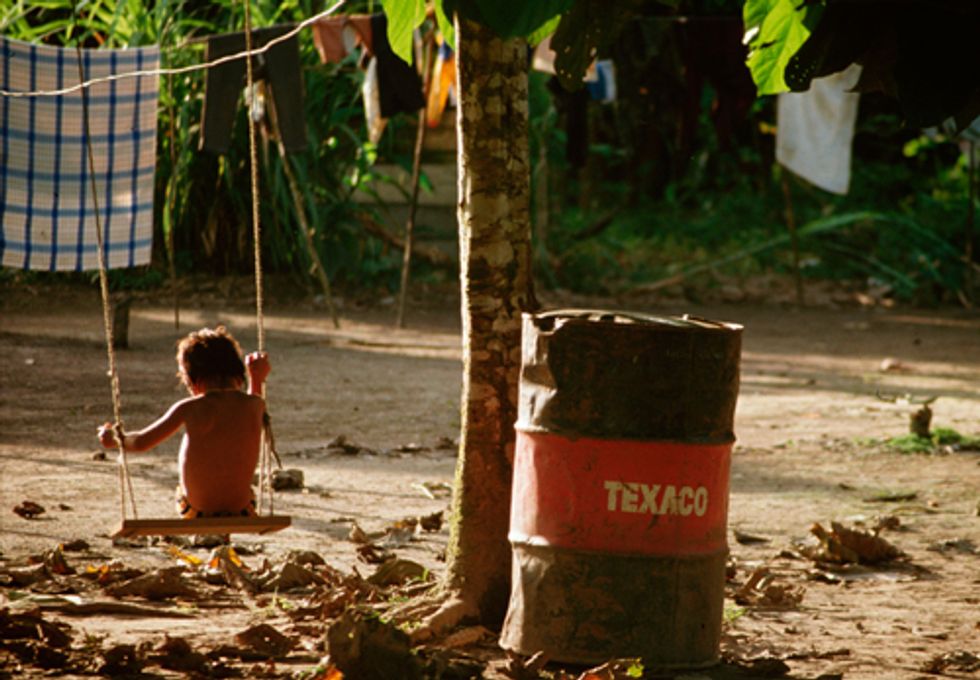 A distinguished international law jurist from Latin America has issued a letter to United Nations Secretary General Ban Ki-moon, asking for a review of Chevron's "egregious misuse" of an investor treaty to evade its $18 billion liability in Ecuador for creating one of the world's worst oil-related disasters in the Amazon rainforest, according to a letter released to thousands of arbitration specialists around the globe.

Jose Daniel Amado, a leading law scholar in Peru and a specialist in international arbitration, told the Secretary General that Chevron's latest attempt to deny the legal claims of the rainforest communities to be decided by an arbitration panel that meets in secret "stands in direct violation of international law" and would "quash" the fundamental human rights of the 30,000 citizens who initially brought suit against Chevron in the U.S. in 1993.

Chevron shifted that lawsuit to Ecuador in 2002 after praising the country's judicial system and promising to abide by any judgment there, subject only to narrow enforcement defenses that did not include international arbitration.

"Chevron has constructed what appears to be a calculated plan to manipulate a commercial investment dispute system to evade the outcome of a private litigation," wrote Amado, who has served as a consultant to the Ecuadorian plaintiffs.

Amado asked the Secretary General to conduct a review of the matter "to ensure that the Bilateral Investment Treaty (BIT) arbitration system is not used by Chevron to undo international law protections guaranteeing access to justice."

In January, after a nine-year legal proceeding, a three-judge panel of the Ecuador appellate court confirmed an $18 billion award against Chevron for the deliberate dumping of billions of gallons of toxic waste into Amazon waterways that local inhabitants relied on for drinking water. The Ecuador trial court found evidence that Chevron's contamination decimated indigenous groups and caused an outbreak of cancer and other oil-related diseases. For more information, click here and here.

The trial in Ecuador produced 220,000 pages of evidence and more than 64,000 chemical sampling results from independent laboratories which proved that dozens of Chevron oil production facilities suffer from extensive levels of life-threatening heavy metals and toxins, according to the findings of the Ecuador court.

On Jan. 4, the day after the Ecuador appellate court decision, Chevron petitioned a private arbitration panel convened under the U.S.-Ecuador BIT to order Ecuador's executive branch to interfere in its independent judiciary and block the ability of the Ecuadorian citizens to enforce their judgment in countries around the world.  Chevron had stripped its assets from Ecuador to avoid paying the judgment.

Lawyers for the Ecuadorians say the arbitration panel does not have such authority, and that in any event Ecuador's government is obligated to ignore its orders given its own binding legal obligations under the Ecuador Constitution and various international treaties protecting the human rights of its citizens. See the letter from Ecuadorian lawyer Pablo Fajardo by clicking here.

The arbitration panel prohibits the Ecuadorians from appearing before it and takes no steps to inform them (or the public) of the status of its proceedings or when or where it is meeting. Nor does it release its decisions in a system that clearly lacks due process of law, said Aaron Page, who represents the Ecuadorians and who has represented governments in the arbitral proceedings.

Some commentators have likened the secret arbitration panel to a "kangaroo court" rife with conflicts of interest and imbued with a pro-business culture. See this article by clicking here.

"Chevron's radical request for relief in this case potentially undermines the credibility of the entire investor arbitral regime," Page said.

In the letter to Ban Ki-moon, Amado noted that a recent "interim" order by the arbitration panel asking Ecuador's government to freeze the environmental case "makes a travesty of the bilateral commercial treaty system" and represents an "illegal expansion of arbitral powers with wide-ranging implications for well-settled principles of international law, including fundamental human rights and state sovereignty."

"Such a result is simply untenable under international law—BIT arbitral panels cannot be called on by investors to set aside countries' constitutional systems and sovereignty, which are essential components of modern democracies," he added.

Concern over Chevron's latest stratagem, Amado pointed out, is shared by a U.S. federal appellate court which ruled last year that the longstanding legal claims of the Ecuadorians "cannot be settled" through the BIT arbitration given that they are not a party to those proceedings.

"The international legal community was shocked by this [interim] Order, which Chevron interpreted to force the Ecuadorian executive branch affirmatively to interfere in a judicial process and limit Ecuador's sovereignty vis-a-vis a case that has been in the courts for 18 years," he said.

The Amado letter was emailed to 7,000 arbitrators around the world by the Peruvian Arbitration Institute, which said it considered the letter "of high interest" to the international arbitration community.

Amado is a graduate of Harvard Law School and the founding partner of Miranda & Amado, one of Peru's leading law firms. He has published numerous articles on international law topics, has lectured in various countries, and has represented both private investors and governments before BIT arbitration panels.

Amado is also a member of the American Chamber of Commerce in Peru and is president of the Energy Legal Committee of Peru's National Mining, Oil and Energy Society.

The three arbitrators hearing the Chevron claims—all private lawyers who represent investors before other arbitration panels in the same treaty system—stand to personally reap millions of dollars in fees if they grant jurisdiction over the case, which in itself is a hotly contested issue given that Chevron left Ecuador five years before the U.S.-Ecuador BIT took effect in 1997, Page said.

R. Doak Bishop, an American from the firm King & Spalding who is Chevron's lead lawyer in the Ecuador matter, has served as an arbitrator in numerous cases convened under the BIT process while he simultaneously represents private clients in the same system. Ecuador's American lawyers are only putting up a nominal defense, essentially leaving the Ecuador plaintiffs without representation before the panel, said Karen Hinton, the U.S. spokesperson for the plaintiffs.

In any event, it is clear that any "award" from the panel will lack legitimacy in countries that observe the rule of law and will not be an obstacle to enforcement of the Ecuador judgment, said Amado.

"This is a far-fetched strategy by Chevron that has little chance of working," said Amado. "But it is our duty as international lawyers to prevent it from causing collateral damage to the international legal order that protects the human rights of all peoples worldwide."

Chevron operated in Ecuador under the Texaco brand from 1964 to 1992.

A background document on Chevron's arbitration stratagem is available by clicking here.