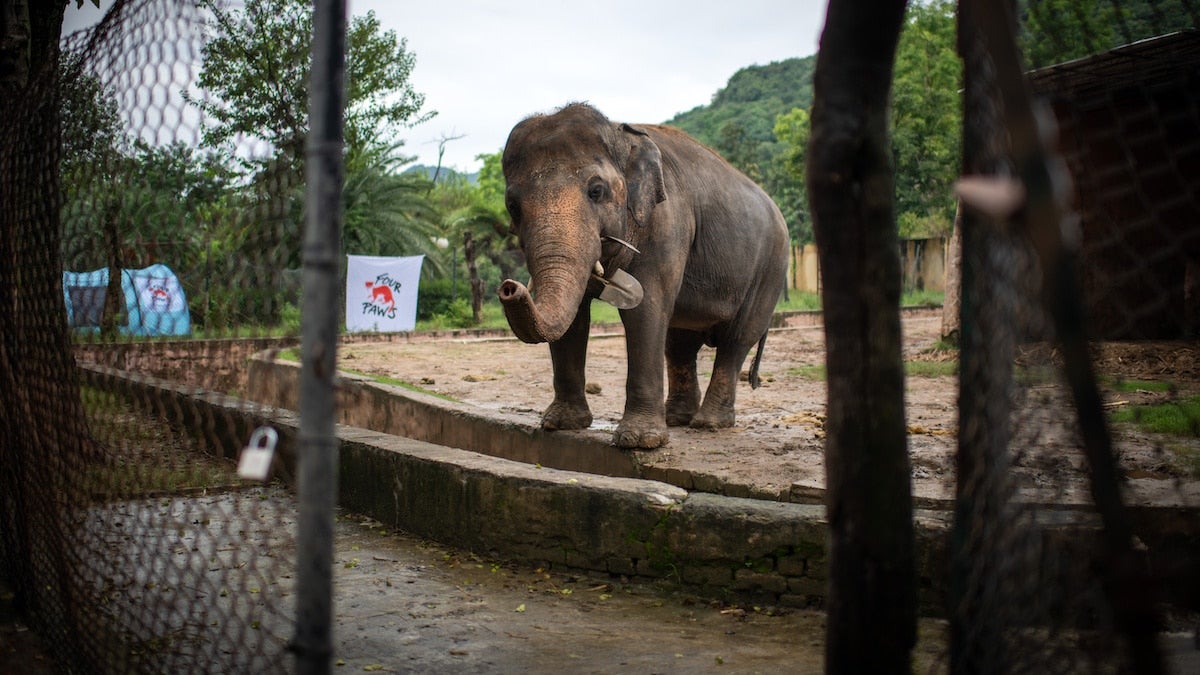 With help from music icon Cher, the “world’s loneliest elephant” has found a new home and, hopefully, a new family.

The elephant, a 36-year-old male named Kaavan, has lived alone in a controversial zoo in Islamabad, Pakistan since his partner Saheli died in 2012, according to animal welfare group Four Paws International. But now, thanks to the efforts of Four Paws, Cher and her NGO Free the Wild, the Pakistani government and American businessman Eric S. Margolis, Kaavan has landed in Cambodia after a 10-hour flight, where he will enjoy a new life in a wildlife sanctuary.

“Kaavan was eating, was not stressed and he even slept a little bit whilst leaning on the wall of the crate!” Four Paws tweeted Monday of the successful flight. “He behaves like a ‘Frequent Flyer.'”

But Kaavan’s journey to Cambodia was much longer than the 10 hour flight. Kaavan, an Asian elephant, was first gifted to Pakistan from Sri Lanka in 1985 and found his first home at the Marghazar Zoo, according to Four Paws. From 1990 until 2012, he shared his enclosure with Saheli. But then she died after an infection turned gangrenous, The Associated Press reported. Her body was left in the enclosure for several days after she passed away, Four Paws veterinarian Dr. Amir Khalil said Kaavan was heartbroken by the experience.

Even before Saheli’s death, the Marghazar Zoo was not a pleasant place to live. Kaavan spent most of his 35 years there in chains. But his condition deteriorated after his partner passed away, and wildlife advocates dubbed him the “world’s loneliest elephant.”

Cher learned about his case on Twitter and decided to get involved, according to CNN.

“I thought, ‘how can I fix this? How can I save an elephant who’s been shackled to a shed for 17 years and who is a thousand miles away?'” Cher told CNN.

Kaavan’s relocation to Cambodia marks the first big rescue for Free the Wild, which Cher co-founded. It is also the first time Four Paws has moved an elephant by plane, the organization said.

Khalil spent three months preparing Kaavan for the journey, The Associated Press reported. At the start of the process, Kaavan was both malnourished and overweight, and suffered from behavioral problems because of his time spent alone. He started shaking his head for hours, and his nails are cracked and overgrown because the flooring in his enclosure harmed his feet.

Khalil put Kaavan on a diet of fruit and vegetables and helped him to lose a ton before the flight. He also helped him to get more relaxed before the journey, which Kaavan undertook with only mild sedation, according to Free the Wild.

“Kaavan quickly gained confidence in us and made great progress in a short time. In his case it not only took a village but a whole country to transfer Kaavan to Cambodia,” Khalil told Four Paws.

Cher was both in Pakistan to see Kaavan off and in Cambodia to greet him on his arrival. She sang “A Dream Is a Wish Your Heart Makes,” to him before he left, according to CNN. In Pakistan, she also met with Pakistani Prime Minister Imran Khan on Friday, according to The Associated Press.

“Just Came From Meeting To Thank Prime Minister Imran Kahn For Making It Possible For Me To Take Kaavan To Cambodia,” she tweeted Friday.

She also said that Kaavan’s story would be told in a Smithsonian documentary.

In Cambodia, Kaavan will live in the Cambodia Wildlife Sanctuary, where there are three other female elephants to keep him company, Four Paws spokesperson Martin Bauer told NPR.

“The goal is to socialize him,” Bauer said. “It will take a while because he has lived on his own for such a long time. But yes, ultimately the goal is to bring him together with other animals because that’s what elephants want. They’re herd animals, they always form families, and that’s also what we plan for him.”

Kaavan is not the only animal who suffered at the Marghazar Zoo. The Islamabad High Court ordered its closure in May because of cruel conditions. Four Paws is also helping to relocate other zoo animals. It has found new homes for three wolves, some monkeys and all of the zoo’s rabbits, the organization said. It will rehome two Himalayan brown bears in December. Margolis, the U.S. businessman, is helping to fund the rescue of the animals, including the bears, and paid for half of Kaavan’s flight.