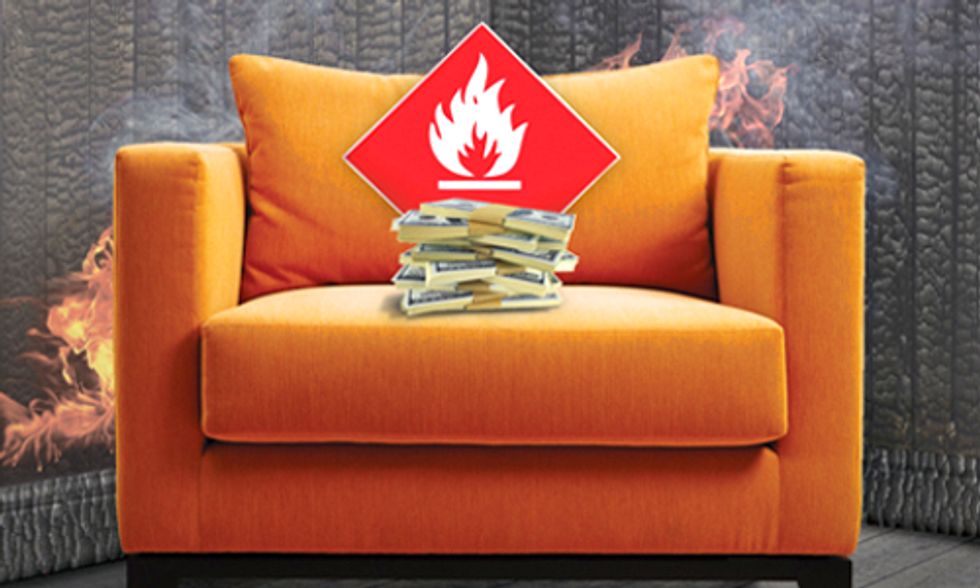 "This lawsuit is a blatant attempt to protect the company's profits under the guise of concern for public safety," said Renee Sharp, Environmental Working Group's (EWG) director of research. "If successful, this lawsuit would undermine one of the most important environmental and public health victories of 2013—Gov. Brown’s move to revamp the state's outdated and problematic fire safety standards."

"Previous fire safety rules did not effectively protect us from fire dangers, but they did contaminate our bodies and those of our children with chemicals linked to cancer and other serious dangers to health,” Sharp said.

The new regulations are expected to have a significant impact nationwide for Chemtura’ future profits because California—with 10 percent of the U.S. population—has so much purchasing power that most furniture makers fabricate their products to comply with the state’s flammability standards.

In 2012, as he began to overhaul the state’s fire safety law, Gov. Brown cited a groundbreaking 2008 EWG study that found that concentrations of fire retardants in children’s blood three times higher than in their mothers’ blood. The reason: children typically play on the floor and come into contact with fire retardant chemicals shed by treated foam furniture.

EWG has been investigating the toxicity of fire retardants in furniture since 2003. That year, EWG tests found one class of toxic fire retardants called PBDEs in the breast milk of 20 American mothers at an average concentration 75 times higher than in European mothers. This dramatic difference was attributed to California’s inflexible fire safety rules. The state legislature subsequently banned PBDEs, and several other states enacted their own restrictions. Eventually PBDEs were phased out across the U.S., but use of other fire retardants continued unabated.

Recently, tests by scientists and consumer advocates found that California’s fire safety rules had triggered widespread use of chemical fire retardants in couches, car seats, changing table pads and other baby products across the country. Chlorinated tris has replaced PBDEs in many cases, even though California regulators have formally labeled this chemical as a carcinogen. Firemaster 550, another replacement for PBDEs, is suspected of disrupting the hormone system.

The new California regulations will allow manufacturers to use safer technologies such as fire-resistant fabrics in place of chemically treated foam. Baby products will no longer be required to contain fire retardants, since they are deemed unlikely to cause a serious house fire.