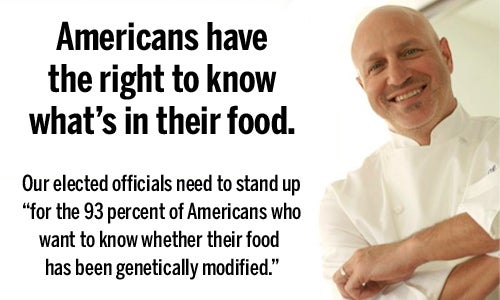 Concerned consumers have been pushing for the right to know what’s in the food they buy for many years. And companies like Monsanto have been pushing back with their money and political influence to make sure that doesn’t happen. So the fight continues for consumers who want companies to be required to label their products if they contain genetically engineered ingredients. 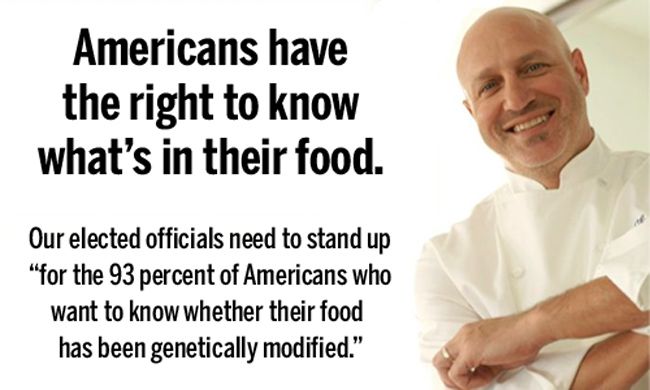 “We cannot continue to keep Americans in the dark about the food they eat,” said DeFazio. “More than 60 other countries make it easy for consumers to choose. Why should the U.S. be any different? If food manufacturers stand by their product and the technology they use to make it, they should have no problem disclosing that information to consumers.”

Tom Colicchio, who owns Craft Restaurants, joined the elected officials because he has been a longtime advocate of using the political system to reform our food system. He co-founded Food Policy Action in 2012 “to hold legislators accountable on votes that have an effect on food and farming.” Food Policy Action’s site contains an arsenal of information about how each elected official is voting on food policy issues. Colicchio hopes the information will be used by Americans to “Vote with their forks and elect more food policy leaders across the country.”

Speaking in support of the GMO Right to Know Act with @BarbaraBoxer @RepPeterDeFazio @SenBlumenthal pic.twitter.com/5fFBmd0pud

“The public wants more information about the food they are buying and how it’s grown,” said Colicchio. “I applaud Senators Boxer and Blumenthal and Representative DeFazio for their leadership and urge their colleagues to join them in standing up for the 93 percent of Americans who want to know whether their food has been genetically modified.”

The bill has many other supporters including Environmental Working Group and Just Label It. Along with Food Policy Action and CFS, these organizations collected signatures from more than 1.4 million people who demand that the FDA require GMO labeling.

The FDA has allowed genetically modified foods to be sold without labeling because it claims these foods are not “materially” different from other foods. Companies can, of course, voluntarily label foods produced with genetically modified ingredients, but Colin O’Neil, director of government affairs at CFS points out, “Not one single company has done so. Consumers want to know more than ever how their food is produced, and a mandatory genetically engineered food labeling bill will give consumers the information they’re looking for while balancing the need by companies for a national labeling standard.”

Earlier this week, farmers from across the country flew to Washington, DC to urge Congress to pass a GMO labeling law. Many farmers are using more and more toxic herbicides such as Roundup and the new Enlist Duo “for use on crops genetically engineered to withstand herbicides such as glyphosate,” CFS said. Monsanto’s Roundup has been linked to a number of human and environmental health problems.

GMOs have not only failed to reduce the need for harmful herbicides—as promised—but they’ve led to farmers using even more harmful herbicides to deal with superweeds. “We’ve run the first 20 years of the GMO experiment and now know that in fact GMOs require more herbicides over time,” said Mary Ellen Kustin, senior policy analyst at Environmental Working Group. “With even more toxic compounds like 2,4-D and dicamba being approved for use on GMO crops, consumers should be able to make informed decisions about what food they’re buying.”