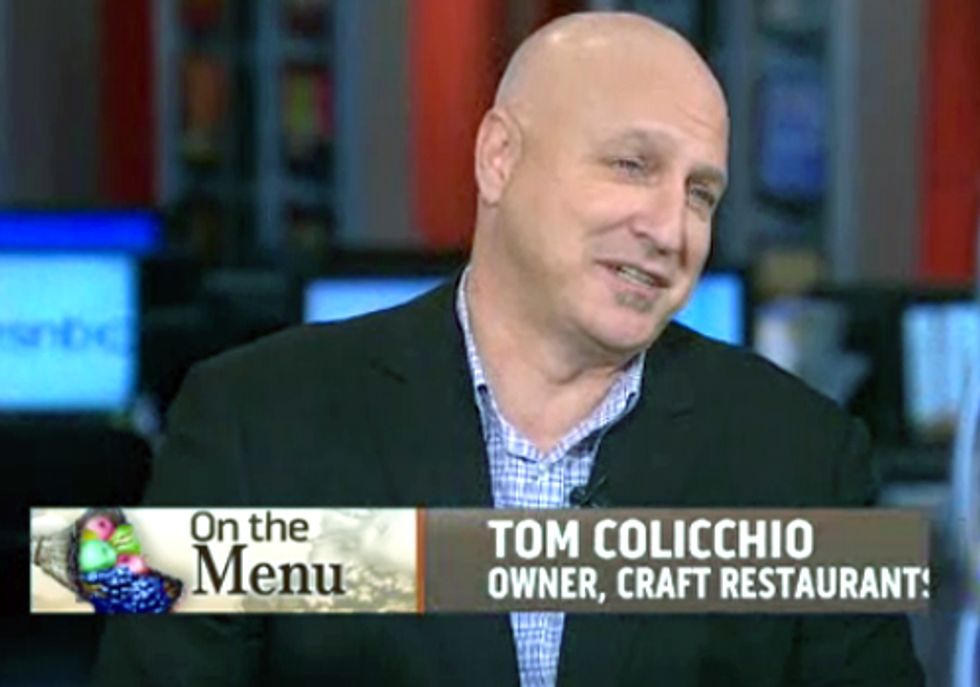 Tom Colicchio is best known as a celebrity chef, but it’s his role as a good food advocate that brought him to the set of Morning Joe yesterday morning. Colicchio was there to talk about a new scorecard released last month by Food Policy Action, the first ever effort to rank members of Congress based on how they vote on food policy. As Colicchio explained, if you care about food issues, you now have a tool to hold your local politicians accountable, be it on issues related to hunger, food safety or local farming systems. In other words, we can now not only vote with our food dollars, but also with our votes.

As a big fan of accountability, I say hooray! But that’s not where the conversation ended. Asked what the biggest challenge on food safety is, Colicchio went straight to the issue of antibiotics use in the U.S. meat industry. Here’s his answer in full:

“One of the biggest problems right now is antibiotics in animals. It’s causing a major problem. I see it in hog growing regions. There’s huge outbreaks of things like MRSA, of bacterial infections we can’t control anymore. A majority of the antibiotics that are out there, that are used, aren’t in humans—it actually goes to animals. That’s one of the biggest problems.”

Asked why this is the case, Colicchio continued:

“When you take animals and you put them in confined feedlots to grow them indoors and in closed quarters, you have to pump them with antibiotics or they’ll die. So this is done in advance of infection. It’s not done once the animal is infected. It’s done in advance.”

Asked how we regulate the practice, here’s Colicchio one last time:

Today, 3-times more antibiotics go to chickens, pigs and cows that are not sick than to people who are, a practice that now ranks amongst the key culprits in the rise of antibiotic-resistant bacteria known as "superbugs."

Drug-resistant infections are harder for doctors to treat, lead to longer illnesses, more hospital stays, and even death when treatments fail. They are also estimated to cost Americans up to $26 billion dollars per year in additional healthcare costs. Multi-drug resistant infections, such as the life-threatening disease MRSA that Colicchio referred to, are on the rise while the development of new antibiotics is coming to a standstill.

Ignoring the science and calls to action by the nation's leading scientific and health-focused organizations? Not very good policy.

In May 2011, the Natural Resources Defense Council (NRDC) took action. We filed a lawsuit against the FDA to finally end the use of medically important antibiotics in animal agriculture. And we won.

But even though the agency was ordered—twice—by a federal court to act on the widespread misuse of antibiotics in animal feed, it remains focused on a false solution—an unenforceable recommendation list to industry they call a “voluntary guidance.” With the voluntary guidance, FDA is allowing the industry to police itself—to “opt-in” or “opt-out” as it wishes. That’s a virtual guarantee of the status quo, which we already know does not work. After all, FDA has essentially been operating under a “voluntary” model since 1977, yet the practice of routinely feeding antibiotics to animals that are not sick has expanded exponentially over the years.

An industrialized meat system that breeds superbugs cannot be called safe and preserving life-saving antibiotics cannot be optional for industry and the government. We deserve better.

FDA has appealed the court's ruling, asking the U.S. Court of Appeals for the Second Circuit to overturn both decisions. Here at NRDC, we remain fully engaged in the litigation and are moving forward with making our case before the court. And as Tom Colicchio made clear, the new National Food Policy Scorecard will now give us—and all interested Americans—an important additional tool to hold our lawmakers accountable should any Congressional votes on the issue arise. So here's to accountability and to Tom for being a champion on this issue.