This Seattle Chef Is Empowering Children Through Food 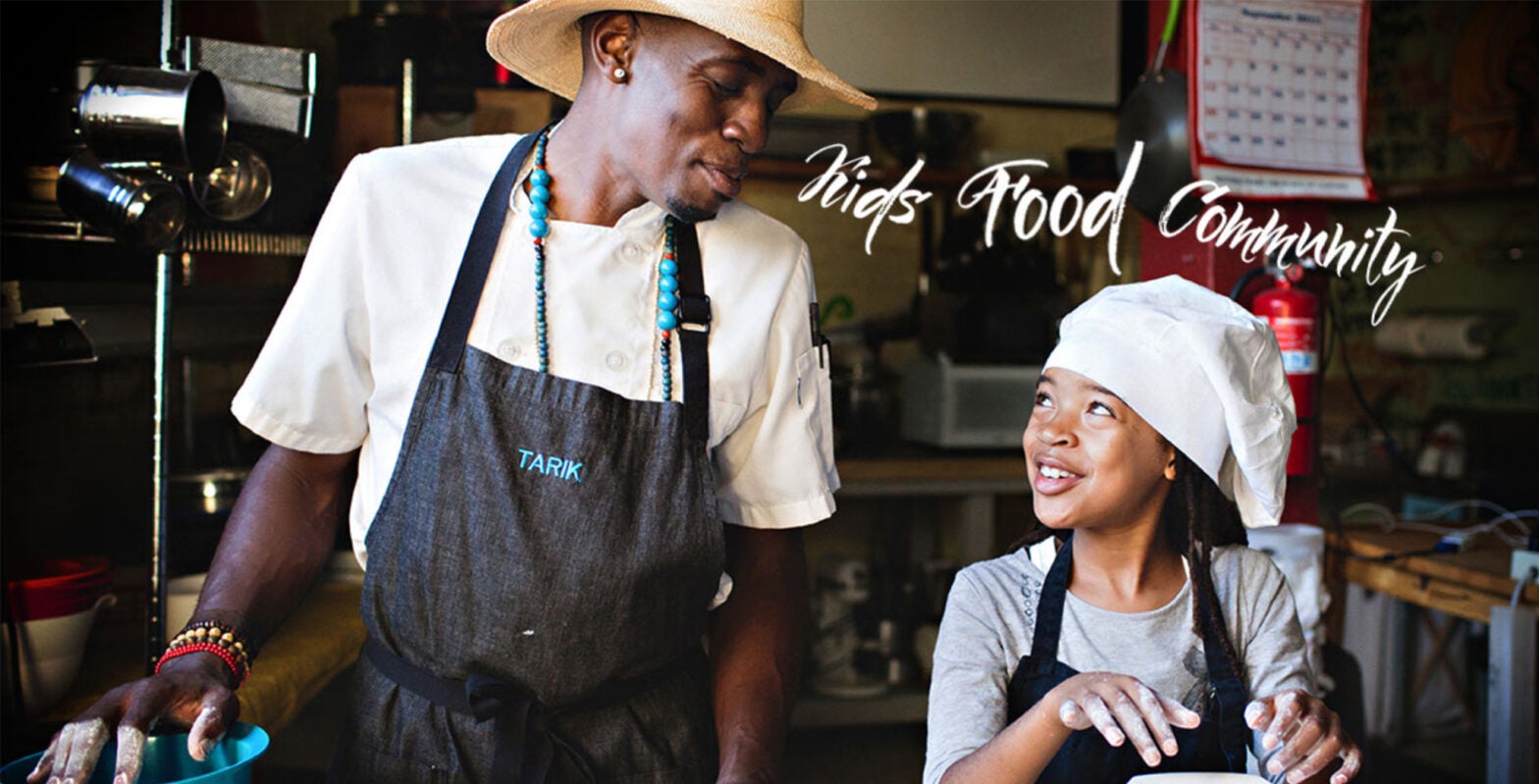 Early in his career, chef Tarik Abdullah wanted to do more than work in a restaurant. It has been more than 20 years since he found his calling while volunteering as a children’s cooking instructor. Since then, his devotion hasn’t waned.

The Seattle native has worked tirelessly to share his passion with his community over the years. His talents have landed him time hosting VICE series Munchies. He was a finalist on ABC cooking show The Taste, and in Seattle, he’s best known for his highly favored Morning Star Brunch pop-ups and his four years as a sous chef at popular Mediterranean eatery Cicchetti.

Now, Abdullah will soon be opening an entirely crowd-funded restaurant and cross-cultural arts cooperative venue with business partners Ben Hunter and long-time Seattle organizer Rodney Harold. With community-building at its center, and in the spirit of Seattle’s Black and Tan clubs of the 1930s that brought jazz enthusiasts of all races together, Abdullah hopes the highly anticipated Black & Tan Hall will honor Seattle’s rich arts history and unite creative people of all backgrounds. The brick and mortar establishment—his first—represents Abdullah’s passions—food and the arts, but is only part of his culinary journey.

He continues to offer food literacy courses and encourage cooking as a viable career path for people of color, particularly children, who might not otherwise consider the culinary arts. Food is empowering for Abdullah, and he believes cooking is a necessary life skill.

According to the U.S. Department of Agriculture, 12 percent of Americans are facing food insecurity—the majority of whom are black and brown, young and poor. And limited and unhealthy food options are the reality for many. But Abdullah says that doesn’t have to be a deterrent to eating well. Learning how to cook healthy meals with limited resources is possible. He wants to make cooking easier for everyone and provide his students with the tools to make smarter, healthier choices that also benefit their communities.

This interview has been lightly edited.

Angela Fichter: Cooking, alone, can be intimidating. But when you consider the cost of cooking healthy foods, where’s the best place to start?

Tarik Abdullah: Good food shouldn’t just be for people who can afford it. So don’t be discouraged. Take $10 or $20, which can get you a long way if you know how to shop. Find a cookbook that has all your basics. Technology has made access to information much easier, even down to online cooking tutorials. Work on a simple but well-rounded 45-minute dish for a few weeks and start to modify the recipe.

We live in Washington where access to great fruits and vegetables is a blessing. Learn how to buy in season. Not all of us can buy organic, but we have places like Rainier Market and MacPherson’s that offer good produce.

Fichter: What are some barriers to access for young people interested in learning to cook? How do you handle those barriers?

Abdullah: Money. But, I teach them to cook on a budget. Again, $10 or $20 can go a long way. When I work with youth through the city’s Parks and Recreation department, there’s a set fee. I also work with a couple of nonprofits and volunteer. The goal is to house my own school, and I’d like courses to be free. I do the best I can to make sure my students know there is good, affordable food out there you can make yourself no matter your age or budget and be confident about it.

Fichter: You want everyone to learn how to cook for themselves, and though it’s ideal, it’s not always a priority in every household. Why are cooking skills so important?

Abdullah: This is what we’re supposed to do, and it only makes sense to pass on these skills to children. I chose food because we live in a chain, fast-food, sugar, salt, and package-heavy society, and young people need to know there’s going to come a time when cooking will be a huge factor in their lives. So, in addition to whatever they like to do [sports, video games, etc.], I just want them to incorporate some cooking.

Fichter: How do you pique youth’s interest in food?

Abdullah: Start them young. My youngest student was four. I find 70 to 80 percent of kids are really into cooking. Many are uncertain. Once you leave the U.S., cooking at a young age is the norm. If they can spend all that time in front of a computer, phone, and TV, they can handle learning how to work with a knife or sauté pan.

Fichter: You credit your father with teaching you his entrepreneurial skills, starting with his successful sausage business in Seattle’s Central District.

Abdullah: As a black kid growing up, especially in the ’80s, you likely had an entrepreneurial household: a mom, dad, or somebody in the family who had multiple jobs or was an entrepreneur. My father’s debut of his Tasty’s all-beef sausage in 1981 in the Central District has to be my most poignant food memory (pork casings were the norm at the time and Abdullah’s family is Muslim). It was a homemade product sharing store shelves with corporate stuff. He taught me to find something and get good at it. He plays a vital role in who I am today.

Fichter: Everyone’s been waiting for the official opening of Black & Tan Hall, something you call the culmination of your life’s work. It carries special meaning since it borrows its name from the racially inclusive Black & Tan clubs of the 1930s. What do you hope to accomplish in the new space?

Abdullah: This is a great way to showcase what community can do. This is a place where people will feel they’re a part of something that’s going to benefit the neighborhood—and they’ll have a stake in how it flourishes. I know there’s a group of kids who want to learn how to cook, and I want to teach them. There’s folks out there who want to make change, and I want to hang out with them. Together we can change our communities and our mindsets on how we eat, live and interact with each other.

Fichter: What does food mean to you?

Abdullah: It means life. It’s our sustenance, our battery, and our bridge to help us move forward to do the work that we need to… whatever that may be. The better I eat, the more I can do, and that’s why we need to look at food more seriously.

I’m now expanding beyond my typical Mediterranean and North African flavors. I take inspiration from my friends and their backgrounds. I’m always asking, “How I can mesh these flavor profiles and make them taste good?” If I can get three or four cultures onto one plate and it harmonizes, then we as people can harmonize as well.

You can follow Chef Tarik Abdullah’s work and stay up to date with Black & Tan Hall here.

Reposted with permission from our media associate Yes! Magazine.