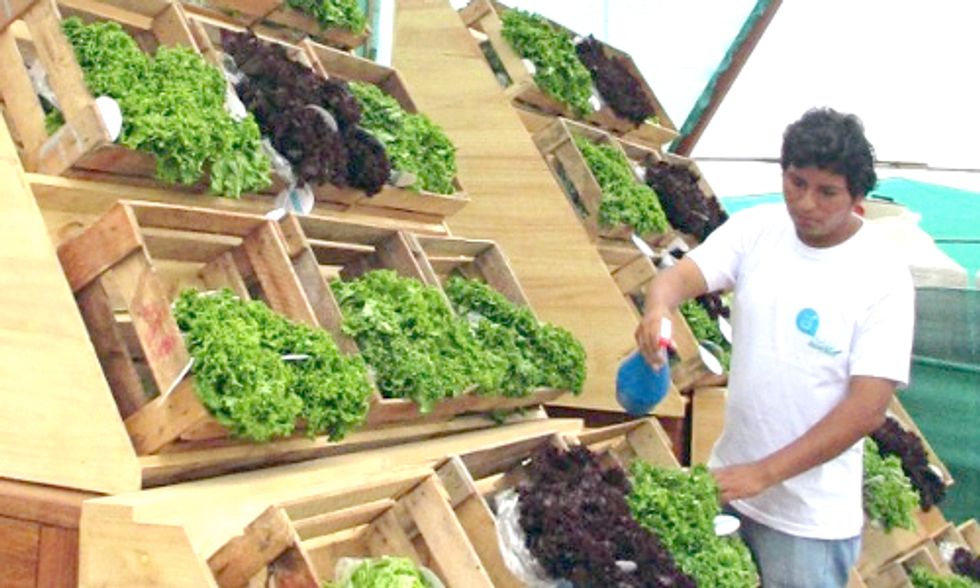 We've seen vertical farms before, but this brings urban agriculture quite literally to the next level. In the Bujama region of Lima, Peru, thousands of lettuce heads are sprouting next to a major highway thanks to a very unusual source: a billboard.

FCB Mayo Peru and University of Engineering & Technology (UTEC)—the minds behind an innovative billboard that's sucking up Lima's notorious pollution and another billboard that's turning the city's humid air into drinking water—have come up with the "Air Orchard" billboard that can generate pollution-free produce.

We all know that this isn't just any old advertisement by the side of the road. So how does it work? The concept is actually very simple to anyone familiar with the soil-free farming method of hydroponics. Sitting behind the billboard's panel are 10 large dehumidifiers that draw in water from the air and turn it into potable water. This water then drips down a series of PVC tubes that are coated in nutrients. The tubes are also white to reflect the sun's rays and boost photosynthesis. Air Orchard's system is simply an adaptation of the "nutrient film technique" of hydroponics, in which plants' roots can constantly access a recirculating stream of fertilizer-rich water.

The billboard is located on Peru’s largest and most important highway, the Panamericana Sur, and is already in operation. According to a press release, more than 2,800 heads of lettuce are given away weekly to passersby and the local community from the Air Orchard—all for free.

In addition to growing lettuce, the billboard produces 96 liters of drinking water a day to provide for the surrounding community. Photo credit: FCB Mayo Perú

“Currently, organic products are gaining significance, compared to chemically treated products. UTEC wanted to work out the most efficient way to grow a crop of 2,000 heads of lettuce using the clean water generated by the panel,” said Jessica Ruas, UTEC marketing director in a statement. “In addition to growing lettuce, the billboard still produces 96 liters of drinking water a day to provide for the surrounding community.”

This technique solves a pressing problem in the area. As the video below pointed out, water that's used for irrigating Bujama's fields are highly contaminated with arsenic, lead or cadmium that can seep into nearby farmland and crops. Consequently, this means the majority of the vegetables consumed in Lima are contaminated.

“UTEC is a university that was founded with the mission of developing applied research that provides practical solutions to the challenges of society and industry," said Ignacio Montero, director of business innovation at UTEC in a statement. "These principles are proven through innovative initiatives like the ‘Air Orchard.’ We improved on our first panel that generated water from moisture in the air for human consumption and increased the production of water to grow healthy food. We have found a practical solution to a real problem, and through creativity and innovation we developed solutions to the challenges of our country and the world.”

Now imagine eating fresh vegetables from a billboard on a highway near you.