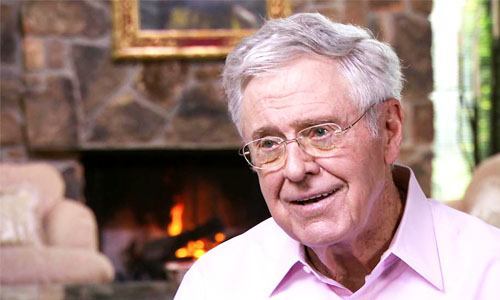 Charles Koch misled CBS when he suggested that the Kochs’ political spending is publicly disclosed.

On Oct. 11, the elder Koch brother gave a rare interview to CBS Sunday Morning. Reporter Anthony Mason asked, “Do you think it’s good for the political system that so much what’s called ‘dark money’ is flowing into the process now?”

"What I give isn't dark… what I give politically, that's all reported." — Charles Koch on political contributions pic.twitter.com/r9tNwpWK7P

Koch replied: “First of all, what I give isn’t ‘dark.’ What I give politically, that’s all reported. It’s either to PACs or to candidates. And what I give to my foundations is all public information.”

This is untrue, according to documents obtained by the Center for Media and Democracy last year.

In addition to the hundreds of millions flowing into politics by way of the Kochs’ network of foundations and funding vehicles like Freedom Partners, funds from the corporate treasury of Koch Industries—the second-largest privately held company in the world—flow into politics and Charles’ brother David is known to have written millions of dollars in personal checks to political groups each year.

"What we are after is to fight against special interests." — Charles Koch on political contributions pic.twitter.com/Ljz0orBb0R

None of this spending is publicly disclosed.

The Koch political network has also established a complicated array of funding vehicles, like Freedom Partners and the Center to Protect Patient Rights (now known as “American Encore“), to funnel hundreds of millions to politically-active nonprofits like Americans for Prosperity (AFP) and American Future Fund. Although the original donors for these funding vehicles are kept secret, by law, these groups must disclose the grants they make to other groups, providing some insight into the Koch network’s political spending.

In contrast, there is no public reporting requirement for donations directly from the personal bank accounts of David and Charles Koch, who together are worth an estimated $83 billion, unless donating directly to a candidate or PAC.

And, there is no public reporting of contributions from Koch Industries itself. Koch Industries is a closely-held company, so its majority owners, David and Charles Koch, do not have to publicly disclose how they use profits from the company’s $115 billion in annual revenue to fund their personal political agenda.

Yet documents obtained by Center for Media and Democracy show that that the Kochs themselves and Koch Industries are pouring millions into politics, with zero public disclosure.

These documents do not provide a comprehensive list of private Koch donations, but instead offer a glimpse into the nearly incomprehensible breadth of the Koch political universe. That universe goes beyond the $400 million the Kochs and their operatives raised and spent through the Freedom Partners/Center to Protect Patient Rights network in 2013.

It is likely that both David Koch himself and Koch Industries have given more to the groups discussed below and to others in additional years, but those records have not been made available.

Known donations from Koch Industries include:

In press releases, Koch Industries has tried to draw a line between its corporate interests and its owners’ political interests. It states on the KochFacts website, for example, that “AFP and AFP Foundation operate independently of Koch Industries.” Yet, it is now known that Koch Industries itself was pouring as much as $1 million each year into AFP during the early 2000s, the only years that such records are available, in addition to contributions from the Koch family foundations and David Koch himself. It is not known how much Koch Industries or the Kochs may have provided to AFP in more recent years, as the group has played an increasing role in elections and its budget has grown exponentially.

In some cases, donations from Koch Industries exceeded donations from the Koch family foundations. For example, in 2010, the Texas Public Policy Foundation—the State Policy Network affiliate in Texas that once counted Ted Cruz as a fellow—received $159,834 from Koch Industries, nearly double the $69,788.61 that the Kochs’ Claude R. Lambe Foundation disclosed as giving to the group.

Known donations from David Koch himself include:

All of these contributions are in addition to millions of dollars of donations, cumulatively, from the Koch family foundations.