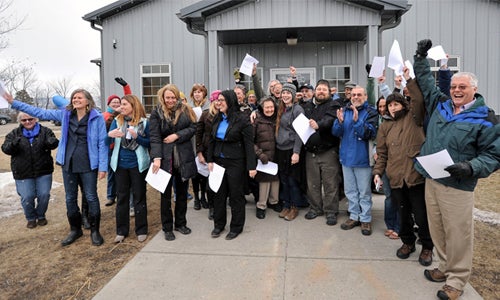 [Author’s Note: As this goes to press, Reverend Nancy Kasper’s charges were dismissed in the interest of justice. She was one of 42 dismissals at the Reading Town Court on March 18. (See video below) Reverend Kasper will still go to trial for her second arrest.]

It was 4 degrees on February 23, on the drive from Mecklenburg to the Reading Town Court. It had become a familiar route. Since October, I’ve been part of a local movement protesting the expansion of gas storage beside Seneca Lake by a company called Crestwood Midstream. The argument is a familiar one. People against the expansion cite environmental concerns: unstable caverns with a history of collapse, air quality issues and their associated health risks, increased train and truck traffic. Local winemakers are concerned about their grapes, being sullied by an industry known for its cavalier destruction.

To date, there have been 216 arrests at the gates of Crestwood. Since November, I have watched musicians, professors, nurses, teachers, bakers, chefs, psychologists, farmers, philosophers, business owners, winemakers and parents face charges of trespassing and disorderly conduct at the Reading Town Court. It is, my husband says, my miniseries.

The best part of the drive is heading west on 79 out of Burdett when the lake just appears. Boom. Like a guy jumping out of a cake. I grew up downstate, in a family that eschewed fresh water for salt. I find it hard to trust water that doesn’t move with the moon. (I once burst into tears at a gas station in Queens because I could smell the ocean). My children, however, were born here. Ignorant of sand up their swimsuits, or being caught in a dead man’s roll, they make piles of shale on Lodi Point every summer, squawking with excitement when a boat goes by, and for a moment, there is a wave. They are lake people. Headed down the hill, the lake was on my right, massive and unapologetic. It was so cold I was driving with my gloves still on. 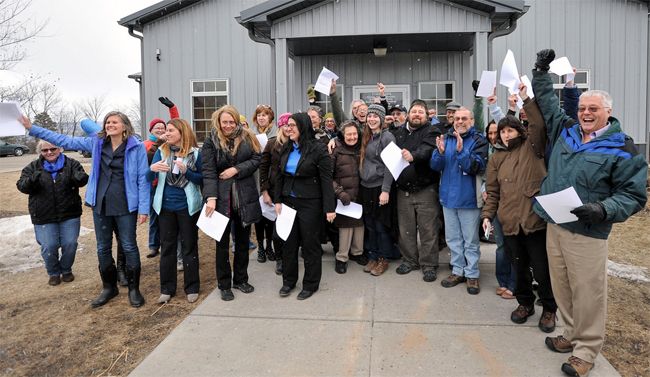 In three speedy hearings on Wednesday night in the Town of Reading court, Judge Raymond Berry granted a motion to dismiss all charges “in the interests of justice” brought by 42 Seneca Lake protesters. Photo credit: We Are Seneca Lake

Today was Reverend Nancy Kasper’s trial. She pled not guilty at her arraignment, and chose to go to trial with a public defender. For a violation, there is no jury, just the judge, which I have learned, is called a bench trial. The deputy at the door of the courthouse asked me if I was there for an arraignment or if I was ‘just visiting”. This is the euphemism he uses every time he sees me, though I am attending a public trial, in a public building. Then it was time for the search. I held my arms out in a T, and told him I’d left my phone in the car. We both agreed that I didn’t have any weapons or bombs on me. He outlined my down coat with the metal detector, and it beeped its assent. All I had on me were mechanical pencils.

I’ve been attending these court proceedings for two reasons. One: moral outrage. Jamming fracked gases into unstable caverns under one of the biggest sources of freshwater in the state, in the heart of a thriving, award winning wine industry is madness. Two: Gratitude. I came of age in a world without trustworthy role models. My heart has grown three sizes watching the people here stand up to defend their home, their water. They have given me the beginnings of faith. So I show up.

There were a handful of people in the courtroom: a few Seneca Lake Defenders that I knew; Barry Moon, the director of operations at Crestwood; and a young man in a dark suit and hair product sitting beside him. He never identified himself.

Wesley Roe, Reverend Kasper’s public defender, started things off by reminding Judge Berry that he had passed a motion requesting an expert witness. His argument, he said, was two-pronged. One, the Reverend had acted on a belief of imminent harm, and two, that harm was real. In order to show this, he said specific testimony was necessary from an expert witness.

John Tunney, the assistant District Attorney, took issue with Mr. Roe’s request, saying, “justification is not an applicable defense.” The question, he said, was not why the defendant had trespassed, but whether or not she had trespassed. Judge Berry said he agreed with ADA Tunney and that there would be no expert witness.

Judge Berry went on to say that in his understanding the application for construction of a compressor station had not yet been approved by the DEC. Roe reminded him that FERC had approved Crestwood’s request to expand their current methane storage to 2 billion cubic feet last summer. Judge Berry still would not allow the expert witness.