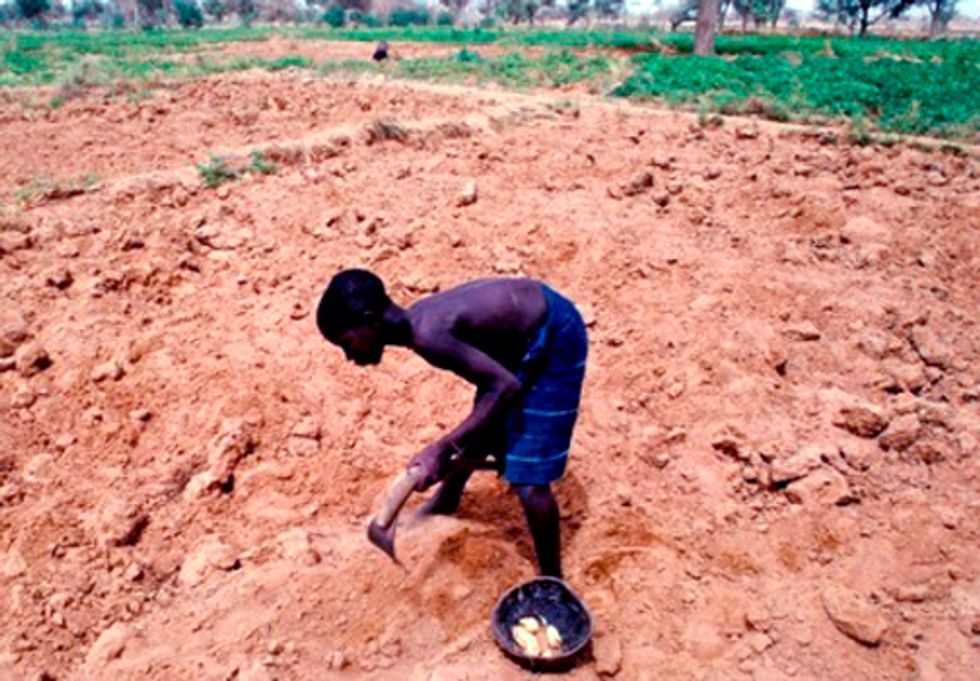 New evidence of changing climate trends in the Sahel and West Africa and their potentially profound implications for food security and regional stability has been released on Dec. 5 at the United Nations Climate Change Conference in Durban, adding to the pressure on governments to stay on a course to reach a new international climate agreement.

A joint study has analyzed regional trends in temperature, rainfall, droughts and flooding over the past 40 years and their implications for the availability of natural resources, livelihoods, migration and conflict in 17 West African countries from the Atlantic coast to Chad.

The analysis detects significant changes in regional climatic conditions, including an overall rise in mean seasonal temperature from 1970 to 2006 of approximately 1°C, with a greater increase of between 1.5°C to 2°C observed in far eastern Chad and northern Mali and Mauritania.

The study shows that the frequency of floods and the area covered by flooding have increased in parts of the region over the past 24 years, for example with large areas of southern Burkina Faso, western Niger and northern Nigeria experiencing up to 10 floods during this period.

The report, Livelihood Security: Climate Change, Migration and Conflict in the Sahel, uses an innovative mapping process to identify 19 "climate hotspots" where climatic changes have been the most severe and which warrant focused adaptation planning and other follow-up activities.

Many of the hotspots are in the central part of the Sahel, in Niger, Burkina Faso, northern and coastal Ghana, as well as northern Togo, Benin and Nigeria.

Common to these hotspots is that they have been most heavily affected by flooding, although they have also experienced slow-onset changes, in particular in temperature and the occurrence of drought, and these varying conditions have affected the livelihoods of millions of people who depend on natural resources.

The study has found that the impacts of such changing climatic conditions on the availability of natural resources, combined with factors such as population growth and weak governance, have led to greater competition over scarce resources and to changing migration patterns in the region.

For example, among its findings the analysis shows that:

Pastoralists are mainly affected by changes in rainfall that occur in the arid and semi-arid areas of the Sahel and influence the availability of shrubs, grasses and water sources for livestock. Their traditional migration patterns are increasingly being replaced by a more permanent southward shift;

Competition for freshwater, coastal resources and land among fishermen, farmers and pastoralists as well as new migrants is increasing, and in some cases leading to heightened tensions and conflict, most notably in the area surrounding Lake Chad;

Large areas of Chad, Mali, Mauritania and Niger faced between six and ten drought seasons between 1982 and 2009, with smaller pockets experiencing between 11 and 15, with some communities requiring emergency assistance. Togo experienced between one and two droughts over the same period.

In combination with changing rainfall patterns, seasonal droughts have already contributed to changes in livelihoods. For example, there is a shift to agropastoralism (combining farming and livestock breeding) which is seen as a strategy to mitigate increasing climate uncertainties.

Early movements south and towards the coast by pastoralists, as a result of changing climatic conditions, can result in increased competition for resources and the destruction of crops in the receiving areas, and lead to conflicts with farming communities. One example was during a drought and locust plague in Niger in 2005 which led to shortfall in crop yield of 4.6 million tons, which forced herders to migrate south and to dry season grazing grounds in Nigeria earlier than usual, and also resulted in higher prices leaving poorer households unable to purchase food.

The increased frequency and severity of climate-related disasters—such as floods and drought—as well as future sea-level rise, could lead to more permanent migration over time;

Major urban centers such as Accra, Kano, Niamey, Nouakchott and Ouagadougou are located within areas most affected by the observed changes in climate. It is estimated that sea-level rise of up to 1 meter would directly affect more than three million people in the region, including residents of major urban centers situated on the coast.

The frequency and severity of flooding has increased in the Sahel and West Africa, allowing for less recovery time for farmland and pastures between floods, resulting in increased risk of deaths, massive population displacement and of crop and cattle losses;

The data shows that areas affected by large-scale conflicts, particularly Chad and northern Niger, have also been affected by changes in climate. Although the study does not try to show any direct linkage between changes in climate and conflicts, people living in areas that have been affected by conflict can be considered as more vulnerable to the effects of changing climatic conditions, compared to more politically stable areas.

The study was conducted by the United Nations Environment Programme (UNEP) in cooperation with the International Organization for Migration (IOM), the Office for the Coordination of Humanitarian Affairs (OCHA), the United Nations University (UNU) and the Permanent Interstate Committee for Drought Control in the Sahel (CILSS), with technical input from the University of Salzburg's Centre for Geoinformatics (Z_GIS).

UN Under-Secretary General and UNEP Executive Director, Achim Steiner, raised the issue of food security as a potential risk of climate change during the debate on climate change and security in the UN Security Council in July this year.

Mr Steiner said that with livelihoods and food security in the region heavily dependent on natural resources, further impacts of climate change on ecosystems could be dramatic.

"This analysis underlines how competition between communities for scarce resources, especially land, water and forests, is already a reality in West Africa and that regional cooperation will be key to diffusing tensions, managing down the risks and curtailing the possibilities of increased conflict and environmentally-induced migration," Mr Steiner said.

"The study also speaks to the negotiations under the UN climate convention taking place here in Durban spotlighting the urgent need for scaled-up investments in adaptation, moving forward on the Green Fund and supportive measures such as Reduced Emissions from Deforestation and Forest Degradation as well as realizing the climate finance of US$100 billion a year by 2020," he said.

The CILSS Executive Secretary, Professor Alhousseini Bretaudeau, said that it was necessary to analyze the impacts of climate change on migration and conflict in order to improve adaptation strategies in the Sahel and take efficient counter-action.

"This cooperation between the international community and CILSS represents a milestone in taking large-scale action jointly—in particular the production of scientific knowledge that will lead to a better understanding of climate change impacts on migration and conflict in this very fragile Sahelian region—for the benefit of the population," Prof. Bretaudeau said.

"The relationship between climate change, migration and conflict remains complex, however, with climate change threatening the integrity of ecosystems that are already made vulnerable by a rapidly growing population, it is evident that this situation will exacerbate competition over natural resources and trigger further movements of people and new conflicts," he said.

Prof. Jakob Rhyner, Vice Rector of the United Nations University, added "especially as the relation between climate change, migration is very complex, we need to further assess the hotspots area. Speaking at the report launch in Durban, he continued, "We have to provide negotiators, governments as well as practitioners on the ground, what they need to know about the potential impacts of climate change and human mobility in order to prepare appropriate legal, institutional, and governance approaches."

The project set out to analyze the historical climate trends in the region, identify 'hotspots' and determine the potential implications for natural-resource led livelihoods, building on existing knowledge that the Sahel has long been subject to considerable climate variability unrelated to anthropogenic climate change.

The study also concluded that migration can be seen as part of the solution, as seasonal and circular migration can be considered as a traditional adaptation strategy in the region. Many communities are already planning for the potential impacts of climate change and are employing innovative small-scale adaptation initiatives, such as cooperation between villages in the sustainable use of local land.

Importantly, the report provides recommendations for improving conflict and migration sensitivity in adaptation planning, investments and policies across the region.

The key recommendations include:

Adopt climate change adaptation policies and programmes that are migration and conflict-sensitive and that aim to reduce livelihood vulnerability, promote alternatives, and improve the availability and access to natural resources. This should be done in order to mitigate the drivers of migration and conflict and help secure development gains.

Promote regional environmental cooperation in addressing climate change, migration and conflict. Issues of climate change and migration are regional in nature, and as such should not only be managed at the national level, as is most commonly the case today.

Root national adaptation policies in the "green economy" and promote the creation of green jobs and sustainable farming practices, in order to enhance food security and increase the resilience to climate stressors.

Prioritize systematic data collection and early warning systems. The systematic collection of climate data should be established and improved throughout the region, notably through the establishment of a comprehensive network of weather stations.

Use conflict and/or migration risk to prioritize investments and build donor commitment to long-term engagement in the Sahel. Addressing climate change impacts on livelihoods in the Sahel requires long-term financial commitment and improved coordination of investments.

Conduct follow-up field assessments in the hotspots identified using a livelihoods approach to determine how resource availability is changing, how livelihoods are being affected, and if incidences of conflict or migration are increasing, in order to inform adaptation strategies and interventions.

To download the report, Livelihood Security: Climate Change, Migration and Conflict in the Sahel, visit: