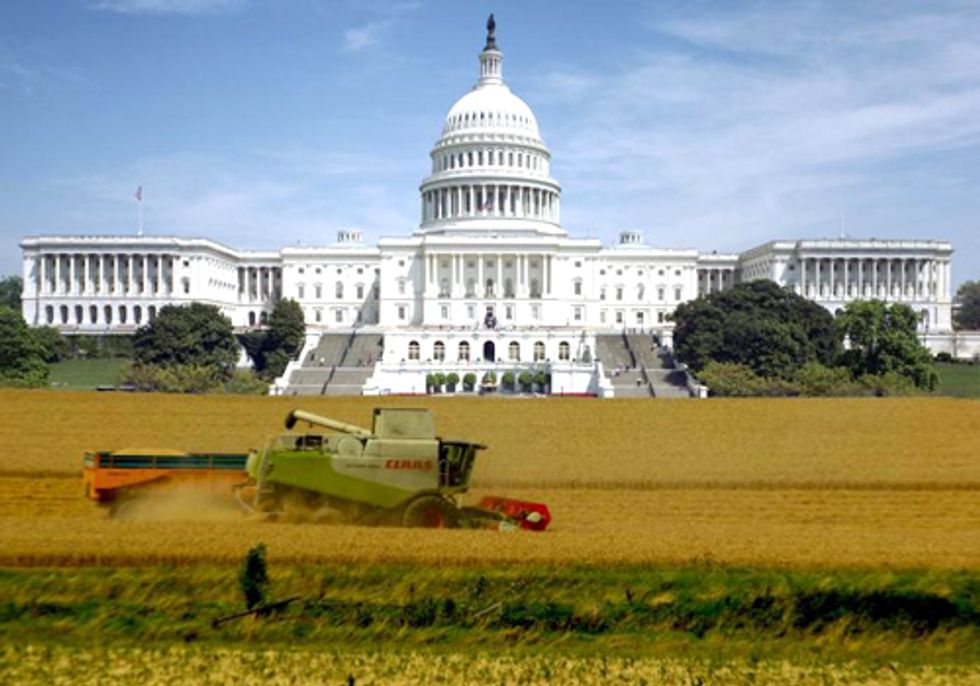 Kari Hamerschlag with Environmental Working Group (EWG) and authors Anna Lappé and Dan Imhoff initiated the group letter. It is an expression of frustration that the Senate agriculture committee’s draft of the 2012 farm bill lacks meaningful reforms and does not reflect broad public interests.

The letter “applauds the positive steps that the proposed bill takes under Senator Debbie Stabenow’s leadership” to support local food and healthy foods programs. It says that the Senate agriculture committee’s proposal is “seriously out of step with the nation’s priorities and what the American public expects and wants from our food and farm policy.” The Senate bill, arguably one of the most important pieces of legislation Congress will consider this year, is set to go to the floor in the coming week.

“Unless we—meaning all of us who eat and pay taxes—demand Congress fundamentally change the way it writes the next farm bill, I can guarantee the interests of agribusiness will once again come out on top,” said Ken Cook, president and co-founder of EWG. “We have a real opportunity to compel members of Congress to work on behalf of our health and the environment if they hear from all of us now. Eaters—it's time to get in the game."

“We are deeply concerned that it would continue to give away subsidies worth tens of billions of taxpayer dollars to the largest commodity crop growers, insurance companies and agribusinesses even as it drastically underfunds programs to promote the health and food security of all Americans, invest in beginning and disadvantaged farmers, revitalize local food economies and protect natural resources.”

The letter strongly objects to any cuts in the Supplemental Nutrition Assistance Program, formerly known as the food stamps program. Senate agriculture leaders have proposed to cut SNAP by $4 billion dollars. The letter calls for serious reforms to the crop insurance program in order to “ensure comprehensive payment caps or income eligibility requirements.”

On June 4, Sen. Kirsten Gillibrand (D-NY) announced she would propose an amendment to cut subsidies that go to private crop insurance companies and use the savings to pay for food assistance programs and to support healthy and balanced diets.

The letter champions conservation action, asserting that “growers collecting hundreds of thousands of dollars in insurance premium subsidies should at least be required to take simple measures to protect wetlands, grassland and soil,” a requirement that is currently absent from the Senate Farm Bill proposal. Without this requirement, the letter says, “unlimited subsidies will encourage growers to plow up fragile areas and intensify fencerow-to-fencerow cultivation of environmentally sensitive land, erasing decades of conservation gains.”

An amendment to require crop insurance subsidy recipients to meet minimal conservation practices is expected to be introduced when the full Senate considers the bill.

“We have a great opportunity to rebuild our communities and food and farming systems from the ground up by investing in stewardship, local and organic food production, the next generation of farmers and ranchers, and sound nutrition,” said author Dan Imhoff. “To make that happen, the public needs to dig in politically and vote with their forks.”

You can read the full letter and list of signers here. Below are a sampling of statements:

“Let's hope that the draft farm bill voted out of the agriculture committee can be improved on the floor,” said Michael Pollan, Food Rules: An Eater’s Manual author and healthy food advocate. “Though it contains some important provisions in support of local and healthy food programs, it gives billions in unlimited crop insurance subsidies to commodity growers while doing little to support precisely the kind of diversified, sustainable farms we need. This is not—yet—the healthy food bill the American public has made clear it wants and deserves.”

"Investing in healthy food, healthy diets and critical nutrition programs for millions of struggling families across the country should be the priority as Congress writes the next farm bill," said Marion Nestle, the Paulette Goddard Professor in the Department of Nutrition at New York University. "Not more subsidies that send billions of scarce federal funds to the bank accounts of Big Food producers."

"We need a farm bill that supports farmers, rural communities, and those who are hungry, not a bill that gives unlimited subsidies to the biggest commodity producers while at the same time cutting programs for the neediest among us," said Anna Lappé, author of Diet for a Hot Planet and cofounder of the Small Planet Institute. "We stand with the millions of Americans who share this common sense perspective."