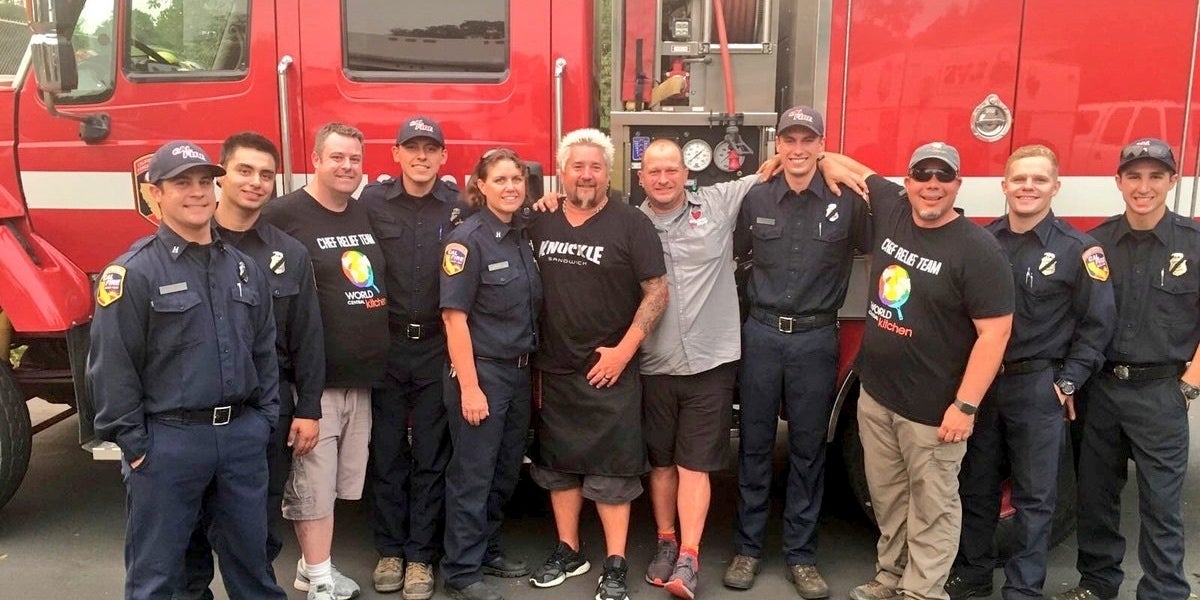 There are 15 serious wildfires burning across California as of Tuesday, with 12,300 firefighters battling the infernos. The flames have scorched more than 280,000 acres across the state, forcing more than 44,000 residents to evacuate.

Northern California’s Carr Fire, the largest of the wildfires, started on July 23 and tore through the city of Redding. It destroyed more than 1,200 buildings, killed six people and displaced tens of thousands.

The #ChefsForCalifornia team handed out fresh lunches and fruit to firefighters responding to the #CarrFire. There are 900 staged here…the least we can do is show our support with a good meal! 🍴🚒 pic.twitter.com/wEbM70k70g

“My team and I got involved. My son and his buddies, and a bunch of my buddies, loaded up the caravan from wine country and drove four hours up here,” Fieri told CNN. “We are just working arm-in-arm with the Salvation Army, local chefs, residents and everybody helping out all of the evacuees.”

The team was able to make more than 1,000 meals twice a day for those affected by the wildfires, Nate Mook, executive director for World Central Kitchen told CNN.

Chef James from Sheraton Redding Hotel stepped up HUGE with pasta salad and coleslaw for 1000 people for lunch and in for another 1000 tonight. Real deal!! @sheratonhotels pic.twitter.com/KXM8d4aJZs

Fieri added, “It’s unbelievable to see what folks are going through, but it’s even more unbelievable just how great this community is, and [to see] all these folks that have come together.”

World Central Kitchen, founded by Michelin-starred chef Andrés in 2010 to provide meals in the wake of natural disasters, also served food to those in need during last year’s devastating Thomas Fire in Ventura and Santa Barbara counties, the largest wildfire in the state’s modern history.

Was able to feed some of our firefighters from back home that we fed during the #thomasfire who are now assigned in #Redding for the #CarrFire! #chefsforcalifornia #CaliforniaWildfires @chefjoseandres @TheLAKitchen pic.twitter.com/syiG3Y6ALX

The nonprofit is coordinating with California’s Office of Emergency Services, the Red Cross, and the Salvation Army to oversee food relief. With partners Operation BBQ Relief and Fieri, they established a central kitchen in California that is prepared to provide 5,000 meals across five evacuation centers every day.

Andrés is not currently in the state but is monitoring the situation and will fly in if needed, Mook told CNN.

“We got six chefs in Redding. Depending on the need we will bring more chefs and volunteers. We don’t know what the next four days will look like, so he will be paying close attention,” he said.