Celebrating the Power of One in Fight Against Climate Change 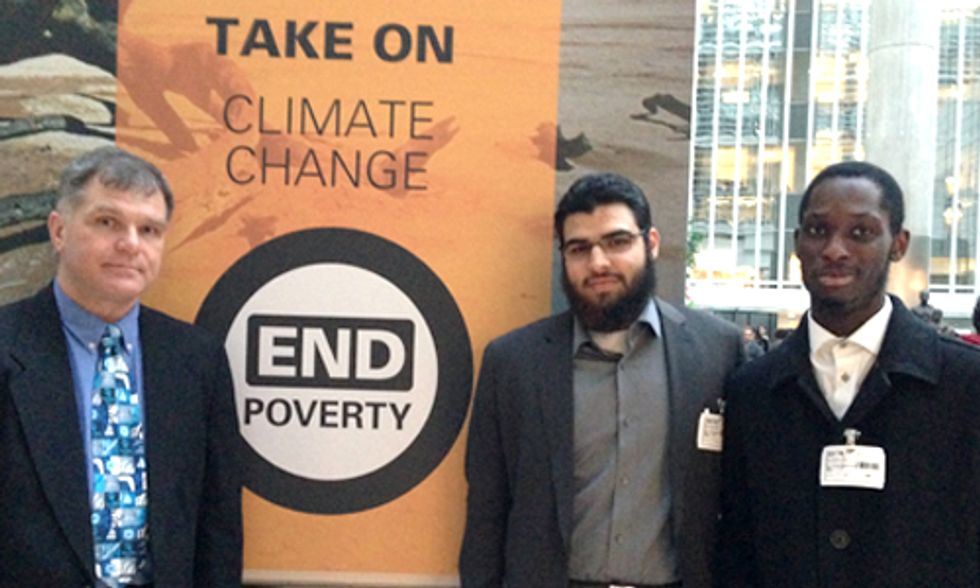 Suleiman Khan is a freshman student at Montgomery College Rockville. He is an international student from Saudi Arabia who is studying medicine. He aspires to be a doctor, more specifically a general surgeon who can help people in third world countries. He is planning to attend University of Maryland within the next year to continue his bachelors degree.

I have always had the feeling that my life was lacking in a way. That I was not doing enough of something. Yet, I could not figure out what that something was. It was a void that needed to be filled.

Suddenly I knew what I could do to help. I knew that I had to spread the word, to inspire as many people as I can. I decided that I would take on my professor’s legacy and enlighten the minds of people about the dangers of climate change.

I remember all this so well because it was only fours months ago that I started to care about what climate change actually meant.

My sociology professor, whom I now consider to be a friend, first formally introduced me to the concept of climate change. At first, I thought that climate change was just a part of my sociology class—something that we would be done with after a few classes. However, that was not the case.

After several weeks of discussing the topic, I realized that climate change was more than that to my professor. For him, it was a passion and he felt an obligation to make his students also feel passionate about it.

I come from a country that is considered one of the richest in the world. A country where temperatures rise high enough to cook an egg on the sidewalk. I was raised in Saudi Arabia.

Climate change has never been a topic on the tongues of the students of Saudi Arabia. I cannot recall once ever hearing about climate change from my teachers, friends, classmates or family. This tells me that there is a huge population oblivious to what is happening around the world.

As a country that produces most of the fossil fuel distributed throughout the world, it is no surprise that climate change is never discussed in Saudi Arabia. That would be like admitting that the Saudi government has left a huge carbon footprint.

Since I only had a rudimentary understanding of climate change, I began researching more about it. I came across several talks on the topic by people I had never heard of before. One of them stood out to me. When talking about climate change, this person had a look on her face that I did not see on others. She had a look that was very familiar to me. In no time at all I remembered where I had seen that look before. It was the same look my professor had when he spoke about climate change. It was the look of passion.

This person’s name is Rachel Kyte, who is the World Bank’s principal advocate for raising global awareness of climate change. Ms. Kyte has given many talks about climate change over the years, and is helping inspire a social change in the world. Her speeches are inspirational. I remember thinking, how can I be like this person?

A week later, I was granted an opportunity that comes once in a lifetime. Have you ever wished you had the chance to meet someone and were granted that chance? My professor gave me that chance. He had sent me an invitation to attend the Connect4Climate screening of Years of Living Dangerously at the World Bank. The film was a preview of a new television series on climate change.

I could not believe how lucky I was. I immediately accepted the invitation and on the day of the screening I arrived at the World Bank a little bit ahead of time in the hope that I would be able to talk to Ms. Kyte. Unfortunately, I was not able to find her then. I was ushered to a seat in the auditorium, where I waited eagerly for the talk to begin. I sat straighter than I usually do and became stiff as a board.

While waiting I realized that there are a lot more people than I thought who are interested in the cause as of climate change. I realized that I was not fighting for lost cause. I felt supported.

The event started with World Bank President Jim Yong Kim stating facts about how he and his organization are trying to deal with climate change. After his talk, he invited three people on stage for a discussion about the importance of climate change and what we might expect to happen to the world if nothing is done to combat it. Ms. Kyte was moderator of the discussion.

The film that followed was something that can only be described as a dream. I could not believe what I was watching. It portrayed the world we live in the today, and the catastrophes that are happening all around us because of climate change. The movie contained many famous people who are also interested in the battle against humans’ constant greed, which is killing the very planet we live on.

The movie screening ended with a round of applause from the audience. I on the other hand had a hard time looking up. I was extremely emotional. The movie had a lot of elements that would have made a stonehearted man break down in tears. I managed to compose myself. I was determined to get a word in with Ms. Kyte.

After wriggling myself between reporters, I finally managed to reach her only to be dumbstruck. I had a small speech prepared on how much she has inspired me but was only able to stutter a bit. Somehow, I managed to compose myself and was able to say a few words to her about that. I was also able to pluck up the courage to ask her if she would be photographed with me. She was happy to oblige.

After leaving the auditorium I had a funny feeling in my gut. Walking past a glass window I saw a smile on my face that looked a bit out of place. After a few minutes I was able to put on a more socially acceptable smile.

I made my way to the small feast our hosts had put together for us. I was greeted by my professor and one of my classmates. My professor was also surrounded by two of his former students. As soon as I was introduced to them I felt an instant connection form between us. We shared the same cause and had the same inspiration.

After leaving my professors side I was struck with a new realization. I realized that the people who had attended the screening with me were not only from the U.S. There were people from China, Poland, India, Italy, Ivory, Coast, South Africa and even a fellow Saudi Arabian.

To see that there were people at the event from all over the world helped encourage me to stand firm and pursue my cause for as long as I my bones and muscles will allow me. To see a fellow countryman at the event was evidence enough that these people managed to get the word across the world. More and more people were becoming aware of our cause.

Suddenly I knew what I could do to help. I knew that I had to spread the word, to inspire as many people as I can. I decided that I would take on my professor’s legacy and enlighten the minds of people about the dangers of climate change.