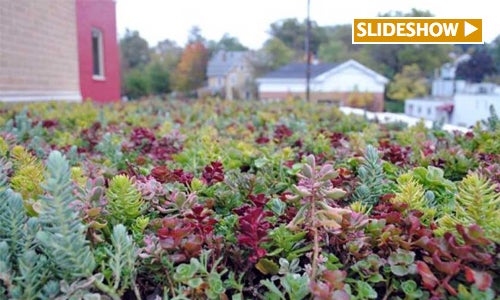 The Executive Director of DC Greenworks, Peter Ensign, recently teamed up with filmmaker Sandy Cannon-Brown to produce a short film on the burgeoning green roof scene in Washington, DC, and it will be screened at the venerable Environmental Film Festival in the Nation’s Capitol on March 21. I used the occasion to ask him a few questions.

Q. What will people learn about green roofs if they see Green Roofs in the District of Columbia at the film festival?

A. Green roofs are an alternative to concrete pipes and water treatment facilities for handling stormwater runoff. Green roofs capture and mitigate rainwater on site to alleviate the costs of treatment facilities, and more importantly to reduce the flow of stormwater into our waterways which causes destruction to aquatic and marine life. DC is a leader in setting conducive policy for, and in, the construction of green roofs. DC has approximately 2 million square feet of green roof currently with a commitment by the mayor to double that amount by 2032.

A. There are 20 benefits realized by green roofs—environmental, economic and social. The most exciting thing to be realized by green roofs is the opportunity for DC’s residents to see a greener urban environment and to comprehend rainwater as a natural asset to be valued instead of flushed away as a liability. On a more practical level, green roofs can produce local fruits and vegetables and are a source of local employment.

By focusing on aspects of the natural ecosystem in dense urban communities, society can become aware of the dynamic relationship between the human-built environment and the forces of nature in cities. Society has the opportunity to design infrastructure that is more in harmony with nature; and as such, more sustainable and resilient over time, as well as less costly to maintain and replace.

Q. Can you describe the green roof scene in DC? Who are the folks in the movie and how did they get involved?

A. The film opens with Keith Anderson, director of DC Dept of the Environment (DDOE). DDOE is the primary agency tasked with reducing stormwater runoff. Also the DC Office of Planning that has created the “Green Area Ratio” that requires property redevelopment to include a high percentage of permeable surface through use of green roofs, rain gardens and permeable pavement. Mayor Gray has developed a plan, SustainableDC, that sets targets for sustainability to be reached by 2032. The Mayor says his aim is that DC will be the most sustainable city in the world.

DC Water, our local water utility, is required under a consent decree to substantially reduce stormwater runoff into our rivers and streams. DC Water has recently requested that they be allowed to implement green infrastructure on a large scale as a part of the reduction plan.

Others in the film are general contractors, property and facilities managers, and NGOs, such as DC Greenworks, Casey Trees, Anacostia Watershed Society and others who have advocated for these changes over 14 years.

Q. How can people see green roofs near them? Is there a national directory, or are other cities or regions green roof hot spots?

A. DDOE has a website that identifies green roofs in DC. I’m not aware of a national directory. Chicago, Portland, OR, Seattle, Philadelphia and New York are probably the other hot spots in the U.S., Toronto and Vancouver in Canada. Germany is the world leader, and many northern European countries excel in green roofs. The use of modern green roofs is also growing quickly in the Middle East, China and Latin America.

Q. Where else besides the big film festival in DC will you and film director Sandy Cannon-Brown be showing this film in 2014?

A. I expect to show the film at the Baywide Stormwater Retreat held in the summer by Chesapeake Stormwater Network. Also the film will be posted on the District of Columbia Office of the Environment and DC Greenworks websites, and there may be others interested in having the film on their sites.

Catch this film and others at the Environmental Film Festival in the Nation’s Capitol’s Sustainable DC program on March 21 at 6 p.m. at the Carnegie Institution for Science.