Cecil the Lion's Killer Breaks His Silence and Returns to Work 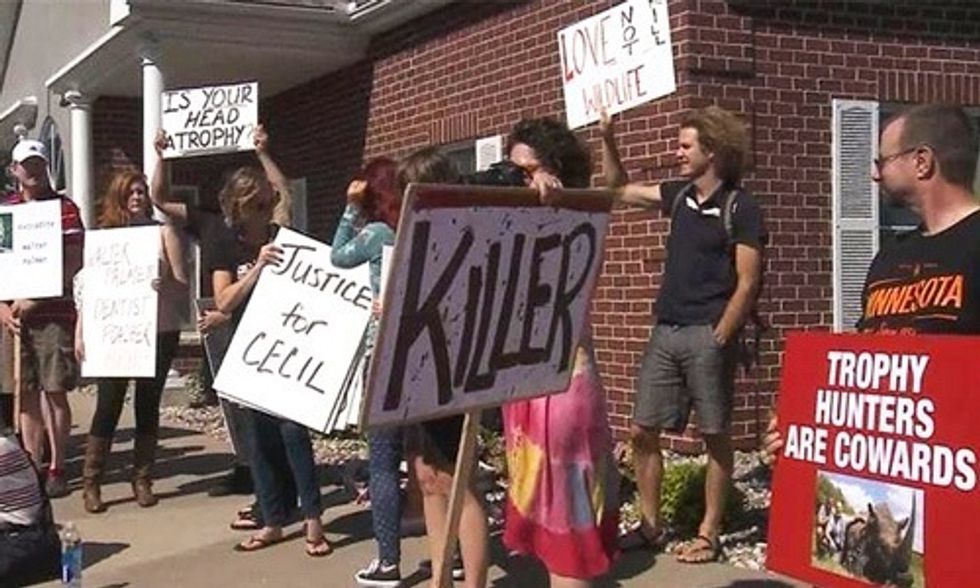 After more than a month in hiding, Walter Palmer, the dentist who killed Cecil the lion in Zimbabwe, emerged at his Bloomington, Minnesota-based practice Tuesday.

Protesters had all but shut down the dental offices when it was discovered that Palmer was the hunter responsible for Cecil’s death in late July and they returned to give the Eden Prairie, Minnesota, resident a not-so-warm welcome.

Shouts of “Murderer” and “Extradite Palmer” could be heard as the 55-year-old big game hunter rushed past hordes of protesters and reporters surrounding the front of his office building.

Palmer didn’t comment as he walked in. But he did break his silence this past weekend, speaking with reporters from The Associated Press and the Minneapolis Star Tribune for the first time since he was publicly identified as Cecil’s killer, sparking a worldwide outcry.

“I'm a health professional,” Palmer said during the interview. “I need to get back to my staff and my patients and they want me back. That's why I'm back.”

The seasoned hunter drew the ire of the international conservation community when he was accused of hiring a professional hunting team that lured Cecil, one of the most popular tourist attractions at Zimbabwe’s Hwange National Park, outside the park by using a dead animal as bait.

Zimbabwe’s Conservation Task Force reported that Palmer wounded Cecil with an arrow and he and his team tracked the lion for 40 hours before finally killing him.

In the interview, Palmer said he didn’t know the lion he shot was famous and believed he acted lawfully in stalking Cecil, saying he relied on a hired guide, Theo Bronkhorst, to ensure a legal hunt.

“If I had known this lion had a name and was important to the country or a study obviously I wouldn't have taken it,” Palmer said in the interview. “Nobody in our hunting party knew before or after the name of this lion.”

Palmer also said that the 40-hour time from when Cecil was initially shot to his death was incorrect, saying they tracked and killed him the day after the night hunt.

He also said that because it was dark, he was unable to see that Cecil was wearing a tracking collar as part of a research project to study lion populations in Zimbabwe. Oxford University scientists said that Cecil’s fate was not unique; of the 62 lions they had tagged in the region, sport hunters had killed 24.

Zimbabwe’s environment, water and climate minister, Oppah Muchinguri, in July called for the extradition of the dentist, “so that he can be made accountable for his illegal actions.”

But attorney Joe Friedberg—who was present during the interview with Palmer but said he was not acting as Palmer’s legal counsel—said that no formal charges had been filed against the dentist.

The U.S. Fish and Wildlife Service is continuing its investigation into the death of Cecil.

The Minneapolis Star Tribune noted that Palmer did not divulge what happened to the lion after the hunt and the location of his remains are unknown. In the wake of the lion’s death, some airlines have banned the transport of certain big game trophies.

Zimbabwe has tightened regulations on trophy hunting within its border and the U.S. Fish and Wildlife Service is considering listing African lions as a threatened species, which could limit the ability of American hunters to return with big game trophies even if they could find an airline willing to fly them home.