Play With Your Cats and Feed Them Meat to Save Wildlife, Study Advises 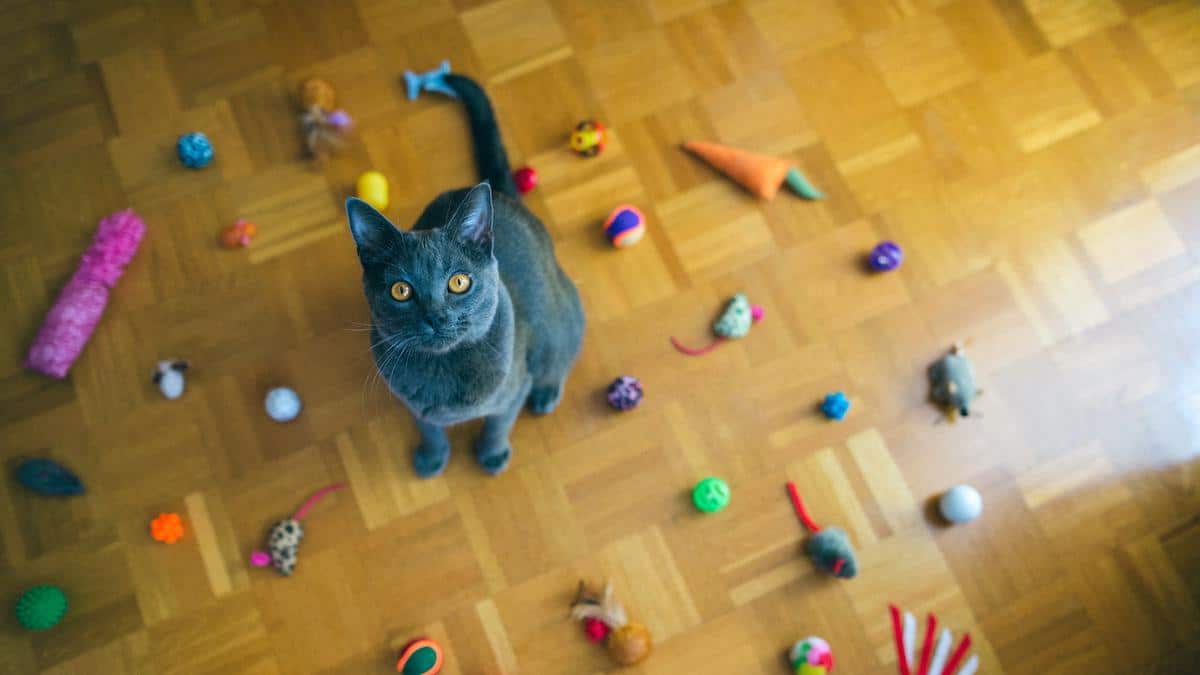 "By playing with cats and changing their diets, owners can reduce their impact on wildlife without restricting their freedom," a new study finds. cunfek / iStock / Getty Images Plus

Domestic cats are adorable human companions, but they can have a terrifying impact on birds and other wildlife. Their hunting has contributed to the extinction of 63 birds, mammals and reptiles, and they are the number one human-caused threat to birds in the U.S. and Canada, according to American Bird Conservancy.

Some scientists have cautioned that the panic over cats is overblown, and that their impact on an ecosystem depends on several factors. But to address the ways in which the needs of house cats and wildlife do conflict, scientists at the University of Exeter are researching solutions that will satisfy cat lovers and conservationists alike.

In a new study published in Current Biology Thursday, they found that playing with cats and feeding them quality, meaty food could reduce their kill count outside the home.

“While keeping cats indoors is the only sure-fire way to prevent hunting, some owners are worried about the welfare implications of restricting their cat’s outdoor access,” study co-author and University of Exeter Environment and Sustainability Institute professor Robbie McDonald said in a press release. “Our study shows that – using entirely non-invasive, non-restrictive methods – owners can change what the cats themselves want to do. By playing with cats and changing their diets, owners can reduce their impact on wildlife without restricting their freedom.”

The researchers worked with 355 cats in 219 homes in southwestern England over a 12 week period. Some of the cats were switched to a no-grain, high meat diet and others had five to 10 minutes of play added to their daily schedule, the study explained. The high meat diet reduced the number of wild animals the cats brought home by 36 percent, while the playtime reduced that number 25 percent, compared both to a control group and to the cats’ previous behavior.

Cat caretaker Lisa George, whose three-year-old tabby Minnie participated in the study, testified to the difference that diet could make.

“Minnie loves to hunt. More often than not, she will bring her prey home and let it go in the house. We’ve had birds in the bedroom, rats in the waste paper bin (which took us three days to catch), rabbits in the utility room,” George said in the press release. “On changing Minnie’s food (previously supermarket own-brand), to Lily’s Kitchen, I found she hardly hunted at all. This continued the whole time she was on this food. I can honestly say I couldn’t believe the difference as regards her hunting behaviour.”

Overall, the researchers found that feeding cats meat reduced their kills of both birds and mammals, according to The Guardian. The researchers are not sure why the meat made such a difference, but suspect it has to do with their highly specific nutritional needs.

“They are unusually needy for some particular nutrients, some amino acids and so on, that are best provided in meat,” McDonald told CNN.

Because meat production is linked to the climate crisis and other ecological concerns, study coauthor and University of Exeter Ph.D. student Martina Cecchetti said the next step was to see if the micronutrients cats get from meat could be identified and added to non-meat meals.

The play time the cats received was modeled on the length and motions of a real hunt, The Guardian explained. It lasted five to 10 minutes and involved the owners moving a feather on a string that the cats could chase and catch. After their “kill,” they were given a toy mouse to play with.

The added play time reduced the cats’ mammal kills, but not their bird kills. The researchers think this may be because the play typically occurred at night, when cats hunt for mammals. They typically catch birds in the morning.

The researchers now want to test if more play time would further reduce the cats’ hunting, or if a combination of play and meaty meals would have a larger impact.

“We suspect that the two things are working on slightly different pathways, if you like, in the cat’s behavior,” McDonald told CNN.

The researchers also tested other measures used to protect wildlife from cats, according to the study. The use of puzzle feeders actually increased kills by 33 percent, while the use of Birdsbesafe collars did decrease bird kills by 42 percent, but had no impact on mammal kills. The use of cat bells did not work overall. The researchers said in the press release that their effectiveness depended on the cat, and that some learned to hunt despite them.

The research was greeted with enthusiasm by the conservation and animal welfare groups that helped fund and advise it. Cats kill around 100 million animals a year in the UK, billions in the U.S. and 230 million in Australia, The Guardian pointed out.

“This latest study we have funded is excellent news for birds,” George Bradley of SongBird Survival said in the press release. “The data show that cat owners (like me) can make a few small and easy steps to really improve the health and happiness of our pets as well as make a really big difference for all our wildlife, especially our beloved songbirds. Making these easy-to-implement changes will be a win-win for birds, cats and cat owners.”