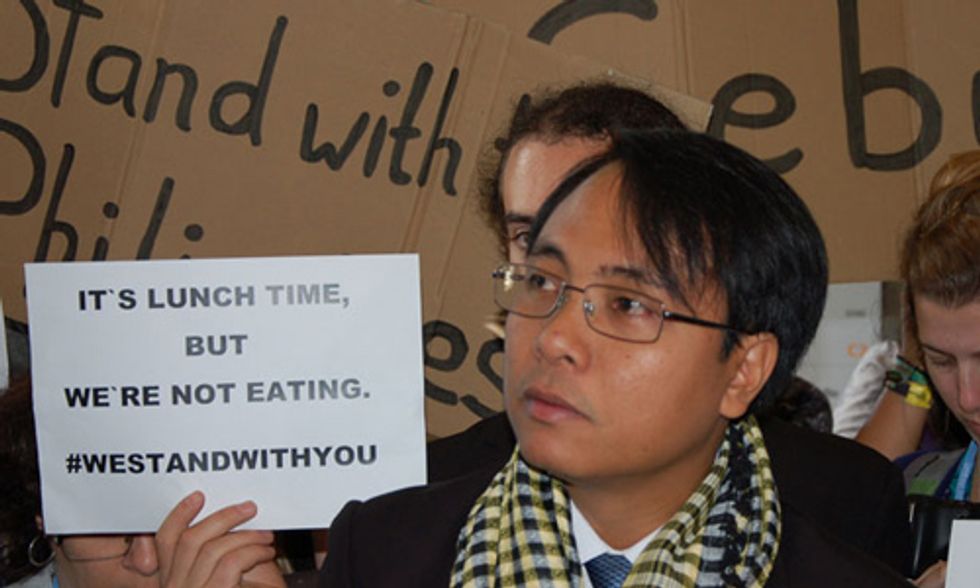 Today marks Ash Wednesday, the beginning of Lent for Catholics. The 40-day period leading up to Easter is a time when Catholics fast, and many try to give up something as a way to deepen their faith. This Lenten season, the Global Catholic Climate Movement, which formed in January, officially announced today the Lenten Fast for Climate Justice.

Filipino delegate, Yeb Sano, initiated a fast during the UN’s 2014 climate talks in Lima to protest the lack of progress. Photo credit: 350.org

The goal is to "raise awareness on climate change" and to challenge Catholics to confront what Pope Francis has called "a globalization of indifference," according to the National Catholic Reporter (NCR). “The essential message is reduce our carbon footprint and increase our spiritual footprint,”Jacqui Rémond, director of Catholic Earthcare Australia, told NCR.

So far, Catholics from 44 countries have signed up for the climate justice fast. Global Catholic Climate Movement hopes that the faithful's unified front on climate will "spur world leaders to work out a binding agreement" to avoid the worst effects of climate change. The organizers are not asking anyone to fast for all 40 days. Instead they are asking each country to fast for one day. In keeping with church tradition, they are asking all Catholics to fast on Ash Wednesday and Good Friday.

Along with fasting from food, organizers are asking Catholics to do a "carbon fast" by incorporating carbon-limiting behaviors, such as walking, biking or using public transportation, working from home, and using less electricity or water. The organizers are also asking participants to share statements or a video explaining why they are fasting and "how climate change has affected their homelands."

Fasting has become a theme for climate activists. Filipino delegate, Yeb Sano, initiated a fast during the UN’s 2014 climate talks in Lima to protest the lack of progress. Climate activists have also been holding a 365-day fasting chain, "which began on the Dec. 1, 2014 and will run until the Dec. 30, 2015 when the UN’s climate negotiations kick off in Paris," according to Responding to Climate Change (RTCC).

“The power behind fasting lies in its purity of purpose and the sense of selflessness necessary to embark on fasting," Sano told RTCC. "This is the power of the fast—because it is meant for our aspirations of a better world.”

Catholics have been fasting for centuries as part of Lent. Why make this one about climate change? "The fast is partially to respond to a lot of the Pope's call to have a conversion on this issue," Rhett Engelking, director of the Franciscan Earth Corps and coordinator of the U.S. Day of Fasting, told VICE News.

The Pope has been making headlines right and left with statements like taking action on climate is essential to faith. In January, the pontificate visited the Philippines and met with survivors of Super Typhoon Haiyan, and on Feb. 14 he met with Tonga's king and queen at the Vatican to discuss the damage that climate change is causing to the Pacific island.

Pope Francis is already living up to his promise to escalate his demand for climate action in 2015. Last week, church officials met to consider creating a new environmental think tank, which would "influence the opinion of the world's 1.2 billion Roman Catholics on such thorny issues as climate change," according to Reuters.

The pope's highly awaited encyclical on the environment is due in early summer, and his visit to the U.S.—particularly his address to a joint session of Congress—this September is already getting a lot of attention. It will be the first time a pope will address the U.S. Congress, a third of whose members are Catholic.