The Tragic Story of America’s Only Native Parrot, Now Extinct for 100 Years 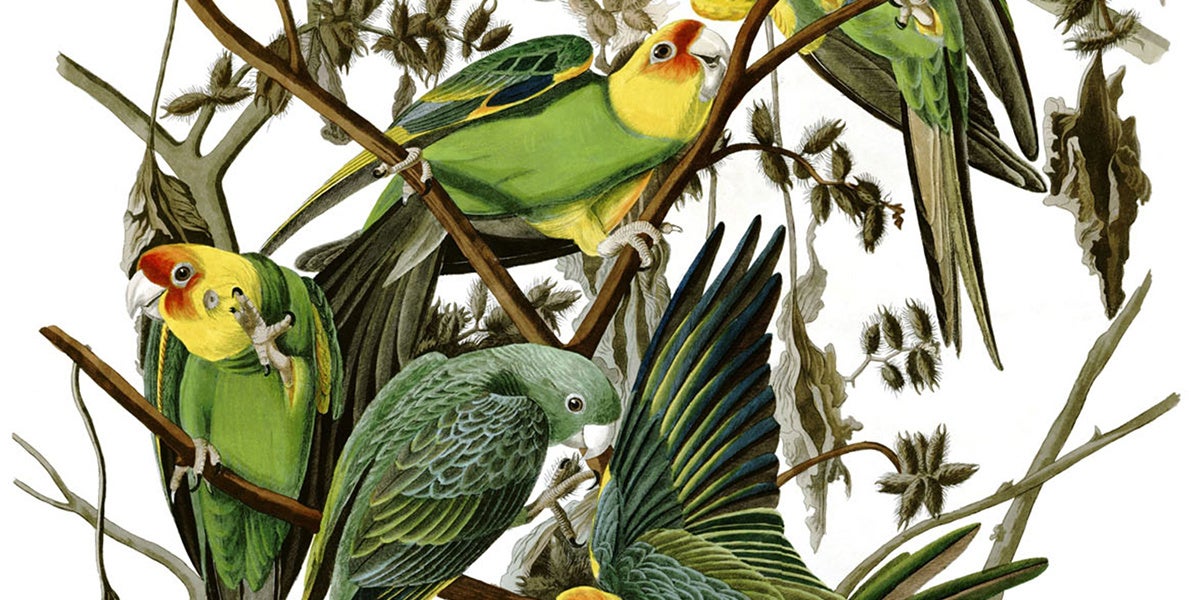 It was winter in upstate New York in 1780 in a rural town called Schoharie, home to the deeply religious Palatine Germans. Suddenly, a flock of gregarious red and green birds flew into town, seemingly upon a whirlwind.

The townspeople thought the end of the world was upon them. Though the robin-sized birds left quickly, their appearance was forever imprinted on local lore. As author Benjamin Smith Barton wrote, “The more ignorant Dutch settlers were exceedingly alarmed. They imagined, in dreadful consternation, that it portended nothing less calamitous than the destruction of the world.”

Why did these birds go extinct? It remains a mystery. Given that parrots today are
at greater risk for extinction than other major bird groups, is there anything scientists can learn from the Carolina parakeet?

Over the past six years, I’ve been collecting information about where the Carolina parakeet was observed over the last 450 years. 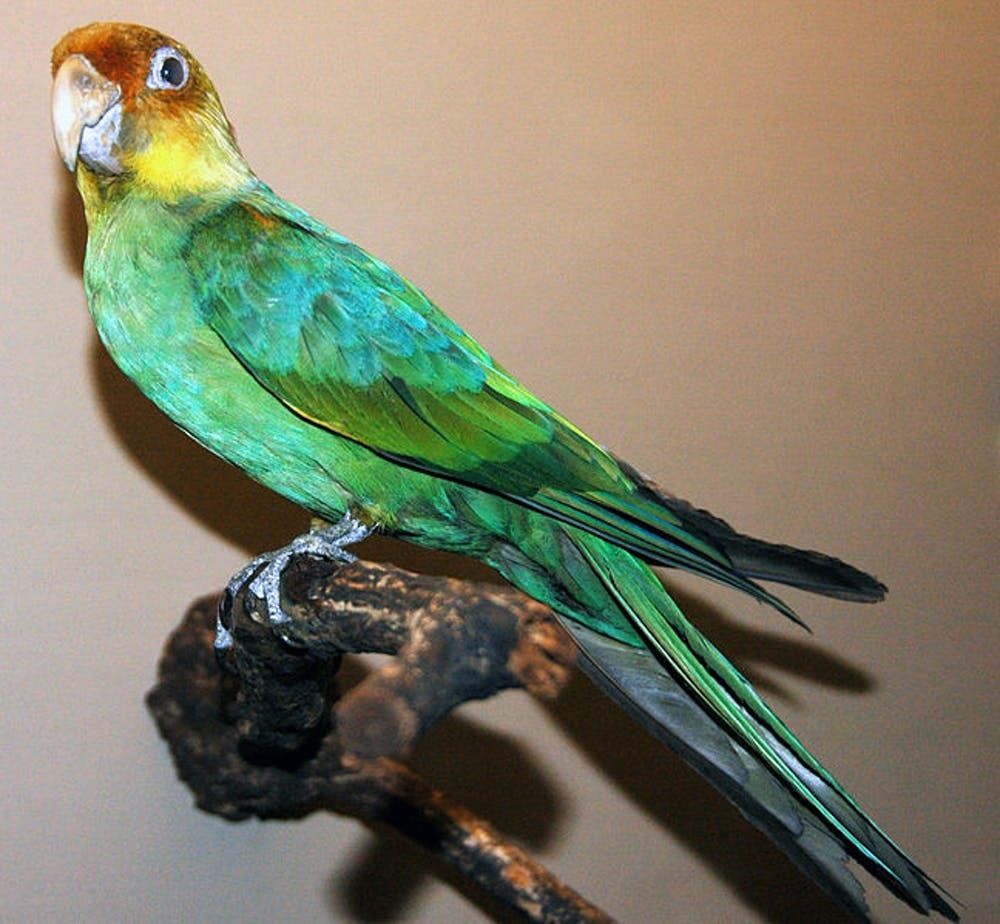 The extinct Carolina parakeet, mounted on display at the Field Museum of Natural History in Chicago.Wikimedia Commons, CC BY

I spent hours upon hours reading historical documents, travel diaries and other writings, ranging from the 16th century all the way into the 1940s. I’ve often become lost in the stories surrounding these parrot observations—from the first accounts of Europeans exploring the New World, to the harrowing tales of settlers traveling the Oregon Trail in the 1800s, to grizzled egg hunters scouring the swamps of Florida in the early 1900s.

I also dug through natural history museum collections, looking at what many would just see as just some old, dusty, creepy dead birds. But I see them differently: beautiful in their own way, each with a story to tell.

My goal was to unravel some of the lasting mysteries about the Carolina parakeet—like where it lived. Historically, people used to determine a species range by plotting the most extreme observations of that species on a map, drawing a polygon around them and called it a day. Because of this, people long thought Carolina parakeets lived from upstate New York all the way to Colorado and down to the Texas coast.

But birds are often seen in areas where they don’t normally go. For instance, the range of the snowy owl—like Hedwig of “Harry Potter” fame—doesn’t really extend
all the way to Bermuda, though one was once spotted there. 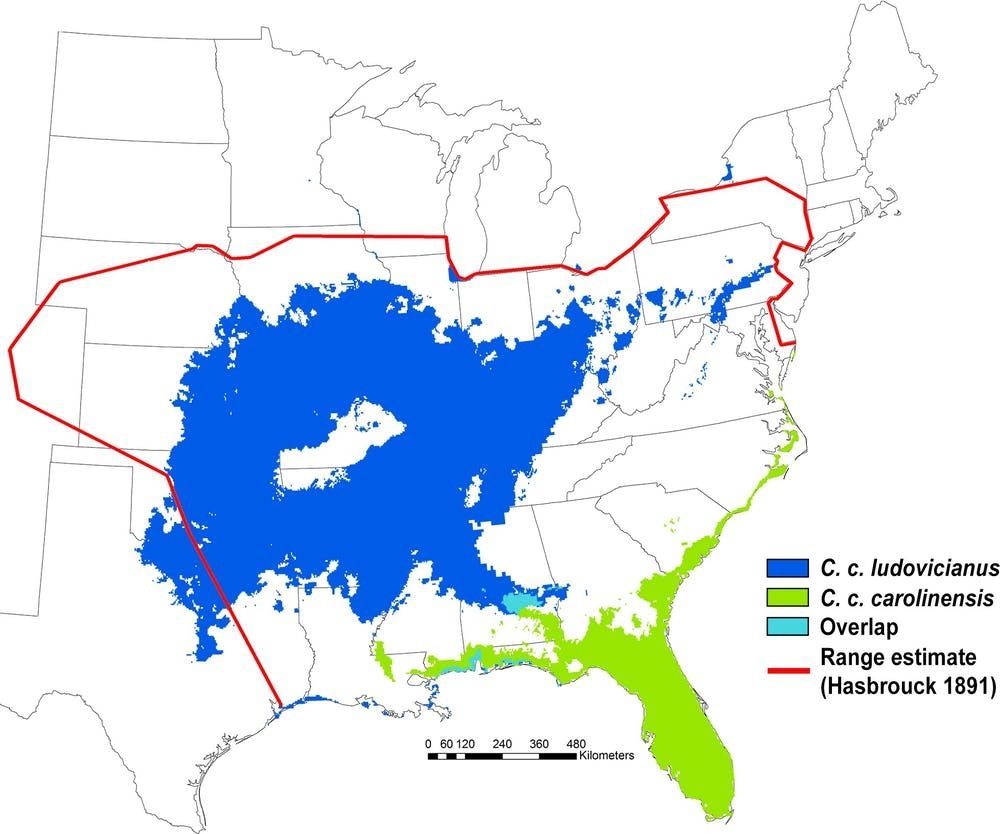 Thanks to the data I compiled as well as cutting-edge machine learning approaches to analyze those data, my colleagues and I were able to reconstruct the Carolina parakeets’
likely range and climate niche. It turned out to be much smaller than previously believed. Generally, their range extended from Nebraska east to Ohio, south to Louisiana and Texas. The eastern subspecies lived mostly along the southeastern coast from Alabama, through Florida and up to Virginia.

We were also able to confirm the longstanding hypothesis that the parakeets in the northwest part of their range migrated southeasterly in the winter, to avoid the blistering cold of the Midwest.

In a world that faces extinction on a scale not seen in the past
65 million years, some of you may wonder: Aren’t there more important things to study?

While this may seem rather minor, some scientists consider the Carolina parakeet one of the
top candidates for “de-extinction.” That’s a process in which DNA is harvested from specimens and used to “resurrect” extinct species, not unlike “Jurassic Park” (but way less action and decidedly less Jeff Goldblum).

If someone were to spend millions of dollars doing all of the genetic and breeding work to bring back this species, or any other, how will they figure out where to release these birds? Given the effects of
climate change, it’s no longer a given that scientists could release birds exactly where they used to be and expect them to flourish.

Whether or not de-extinction is a worthwhile use of conservation effort and money is another question, best answered by someone other than me. But this is just an example of one potential use of this type of research.

In many ways, the history of the Carolina parakeet’s decline parallels the history of American growth over the course of the 19th century. All that prosperity came with many terrible costs. As the U.S. expanded and remade the landscape to suit its needs, many native species lost out.

Today, parrots face a serious threat of extinction. Parrot diversity
tends to be highest in areas around the world that are rapidly developing, much like the U.S. during the 19th century. So whatever lessons the Carolina parakeet can teach us may be crucial moving forward.

I continue to study Carolina parakeets, and other recently extinct species, in the effort to hear and relate these lessons. As cliche as it is to say, those who cannot remember the past are condemned to repeat it.