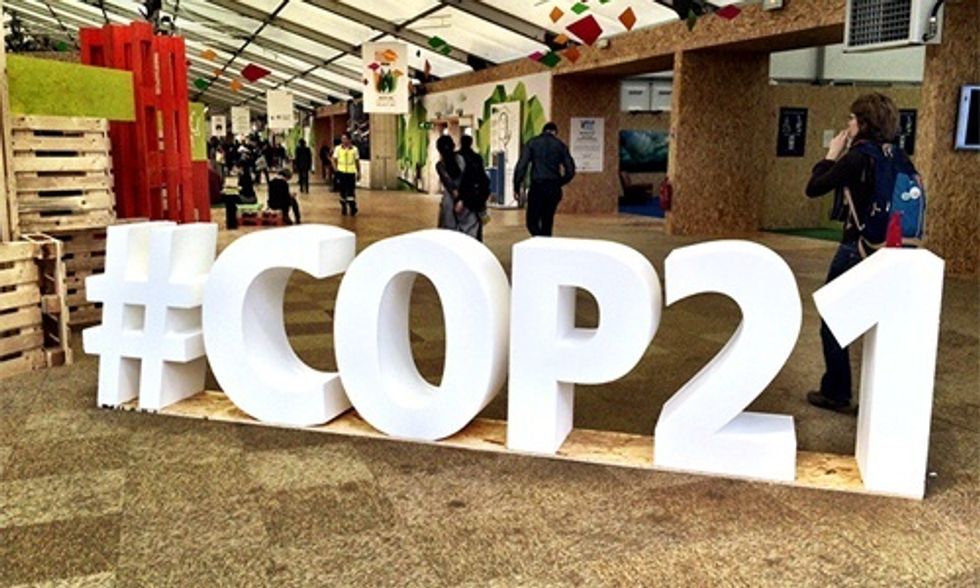 If global warming was an enemy army besieging Paris and the COP21 UN climate summit the defenders, there is no sign outside that the siege is being lifted. It’s in the mid-50’s here, a full 10 degrees above normal.

But you can sense that climate advocates recognize that this may be their moment. At the opening assembly of heads of state four days ago, the Big Four – U.S., China, EU and India—laid their claim to leadership and ambition and called for success. Canada and Australia, the two carbon exporting industrial democracies, have both replaced climate skeptical Prime Ministers with advocates of action. Russia, whose short-term self interest might lie in a failure of the Paris talks, has pledged not to disrupt. Poland remains as the biggest outlier, calling for less ambition, but seemingly still in the tent.

The formal negotiations, predictably, are bogging down and tempers are rising. Unlike heads of state, climate negotiators each strive to take home a head on a platter at each other’s expense, so they see a “zero sum game” however sternly Chinese President Xi may caution against that narrow view.

Most of the inside reporting from these talks will be framed within that narrow negotiating context. An enormous amount of the argument will be “sound and fury,” not substance:

1. Legally binding is a meaningless term. President Obama and the Republican Congress may spar over what this means; the EU may pound the table demanding more “bindingness.” China and India may draw a bright line against being “obligated” themselves while seeking to make the OECD powers “deliver” on their obligations. But no country is going to get so much as a traffic ticket as a result of any deal struck in Paris—or even offered. The UN has no black helicopters to enforce any agreement. No version of the text on the Cop 21 table imposes any penalties on anyone. Kyoto was, in the language of these talks, “binding.” Canada ratified it. The U.S. did not. Canada walked away from its obligations and paid no price. The U.S. met obligations it had not legally assumed. It got no reward from the UNFCCC.

2. The 2 degree pathway is a destination, not a starting point. We already know what the world is planning to do in terms of immediate decarbonization. The final commitments made by the end of the week will simply ratify the national offers already on the table. Roughly speaking, these “INDC’s” [Intended Nationally Determined Contributions] will cut emissions by about half of what climate scientists recommend. That “gap” will not, in any arithmetic sense, be closed in the next two weeks. But this is good, not bad news—we have closed half of the global ambition gap in the past eighteen months, a pace of progress vastly in excess of anything we have seen before.

3. What the negotiations will drive is momentum. The incentives and the level of trust and perceived solidarity—will shape how quickly the world economy prepares itself for the next round of carbon pledges, ones that will be identified between now and 2020, initiated during that period and ratified at COP26. The speed at which decarbonization accelerates is the crucial factor. These elements of the next ten days of negotiation will shape our future.

We are indeed poised to ratify more climate diplomacy progress in the next week than we have achieved in the past 20 years. But we can still stumble and the path to success is narrow and slippery. Stay tuned.