Carl Pope: We Need a New Approach to Trade Diplomacy With Climate Protection at Its Core 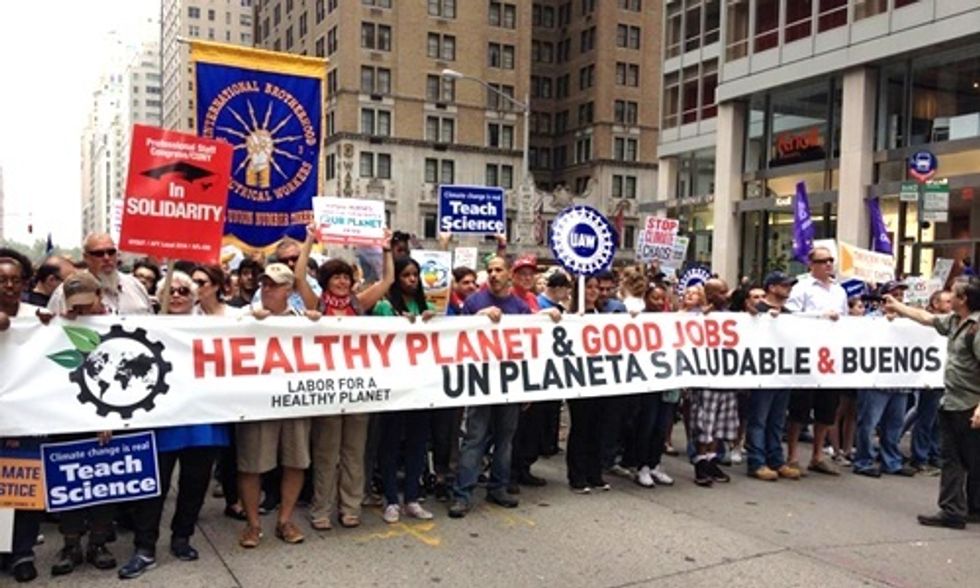 When Minority Leader Nancy Pelosi rose to speak against Fast Track Trade Authority for President Obama, she sealed the fate of last Friday’s round of voting—and signaled the beginning of something crucially important—a fresh debate on the nature and purpose of trade diplomacy.

Following Pelosi’s call to “slow down fast track,” an assistance package for workers displaced by imports—which Pelosi had insisted be an essential but separate part of the full trade deal—went down in flames, 126-302. Republicans have never liked the idea, and Pelosi’s stand, plus intense labor and environmental campaigning, produced a tidal wave of Democratic votes against it. And the vote on Fast Track itself—now a nullity without worker assistance—barely earned a majority, with 219 votes.

Pelosi’s decision to break with Obama should not have been a shock—this round of trade negotiations has alienated more core Democratic stakeholders than all the previous deals put together, partly because of secrecy and lack of transparency, but largely because the results of the last round of trade deals, particularly with Korea, have been so negative for U.S. employment.

But what was surprising was the emphasis Pelosi laid in her speech on Republican efforts to prohibit (imaginary) Obama efforts to use trade agreements to limit climate pollution.

There is not a shred of evidence that it had ever occurred to Obama to jeopardize a trade deal with Asia in order to enact restrictions of fossil fuels. Indeed, the deal would actually have reduced presidential power to regulate trade in fossil fuels. It thus had strong support from the oil and gas industry who think it will encourage more domestic production and higher prices. But Republicans decided that they might get more of their caucus to vote for the bill by inserting language blocking the President from inserting climate language in trade deals anyway.

Pelosi called them out, and repeated her emphasis on climate change even more clearly in a follow up op-ed in USA Today, tellingly headlined, “Fast Track on Its Last Legs.”  She said:

The climate crisis presents a challenge to the survival of our planet, but it also presents an opportunity to create a clean energy economy ... we must recognize that workers' rights, consumer and intellectual protections, and environmental safeguards must be just as enforceable as the protection of the economic interests of investors.

Pelosi was making a point, not averting a threat. But her point was an extraordinarily important one. Rapidly evolving attitudes towards climate are beginning to call into question one of the most insidious and vicious features of the global trade system. As nations begin to deal with the first recognized global environmental crisis, even establishment economists are beginning to realize that importing nations have a legitimate stake not only in what goods and services they import, but in how those goods and services are produced.

Before the North American Free Trade Agreement (NAFTA) and the World Trade Organization (WTO), nations could, effectively, set environmental standards on goods they imported. They could levy additional tariffs if goods were made within factories that poisoned workers, ban imports of tropical woods logged in environmentally devastating fashion or require that imported shrimp be netted using technologies that prevented the “by-catch” of endangered sea turtles.

Most people think of “free trade” agreements as impacting which goods are imported and where they are produced. But in fact, multi-national corporations and trade advocates have insisted on prohibiting quality standards—on wages, worker conditions or environmental impacts—calling them “discriminatory.” Importing nations no longer have the right to question the environmental or social impact of the goods they consumed. Since there is no evidence that the general public anywhere would embrace this perverse concept, it has also been an unstated part of trade doctrine that restrictions on the ability of nations to insist on environmental (or social or labor) standards on imports needed to be kept as invisible and opaque as possible. Secret courts have been the preferred mechanism.

Thus, consumers of blue jeans in the U.S. have no information about, and no control over whether in dyeing the denim, effluents were properly treated before being released into waterways; no choice about whether workers assigned to spray the jeans with acid were provided with proper protective gear or whether the factories where the jeans were sewn were firetraps.

This never made sense. Pollution crosses not only local but national boundaries; weak standards upstream on a river destroy agriculture and drinking water in a nation downstream. That downstream nation might want to refuse to import products whose production poisons its own water supplies. But, according to current "free trade” doctrine, it can’t.

The result of these rules is to make the full trade equation look like this: goods + pollution imported = jobs + dollars exported. Not very attractive when you think about it.

And climate—because every molecule of CO2 has the same global impact regardless of which country, continent or hemisphere emits it—has made this reality brutally clear. If nations are going to levy taxes or fees on carbon pollution to protect the climate, they are going to want to be able to insist that their trading partners join them.

And this need is being embraced by mainstream, pro-free trade economists. William Nordhaus, at Yale, for example, has called for the creation of a “Climate Club”  of nations committed to reducing carbon pollution with a tax—and then imposing a four percent tariff on imports from nations that didn’t follow suit. Such “border adjustment fees” have long been advocated by labor leaders like the Steelworkers President Leo Gerard. But with support broadening, and with the evidence collapse of the political consensus that gave us NAFTA and the WTO, it’s time for this kind of fresh thinking—with climate at its core.

In her USA Today piece, Pelosi effectively drew a line in the sand:

It is clear that the debate on the trade authority is probably the last of its kind. The intense debate of the past few weeks has further convinced me that we need a new paradigm.

That is one of the most important political events of the past several years. Investor-oriented globalization faces by far its most serious challenge—now its up to those of us who have been left out of trade diplomacy to come forward with better ideas.