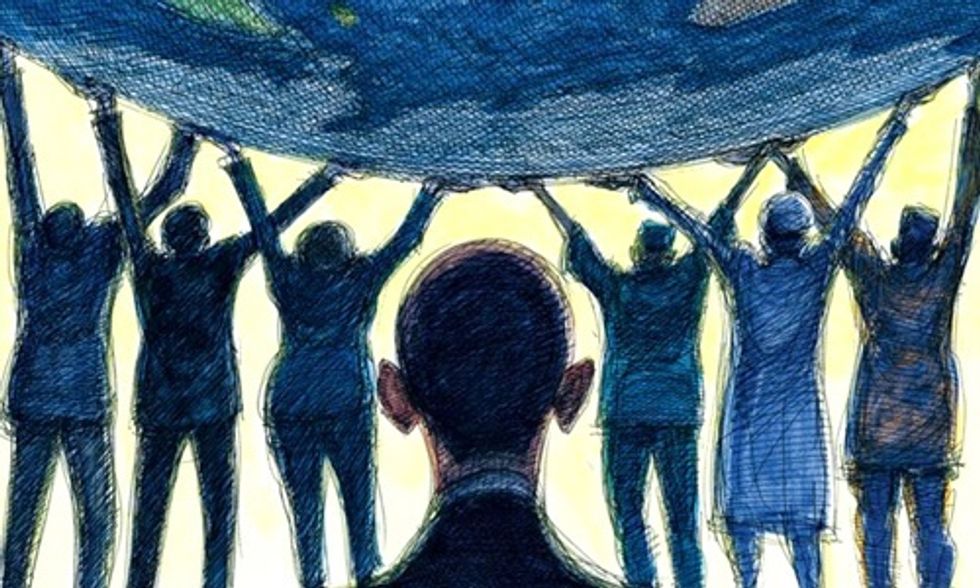 At the heart of the Paris agreement are 195 voluntary national pledges to reduce climate pollution. These pledges broke through decades of gridlock, but if fulfilled, get us only halfway to climate rescue. By 2020 nations must be ready, roughly, to double this pace of emission reductions—but the pledges they made do not, in a legally binding sense, kick in until that year.

The hidden premise that powered Paris was that countries would not wait until the 2020 deadline, but would act promptly. Why would they act sooner than pledged? Because, the negotiators hoped, these goals are steps countries want to take for their own selfish reasons.

Many of the world’s biggest emitters have taken aggressive and substantial steps to redeem their voluntary pledges. Photo credit: Victor Juhasz

With sufficient velocity by 2020 it would be clear to everyone that faster emission reduction is a good deal all around, indeed inevitable. Rapid decarbonization will be seen in 2020 as vital for countries to remain competitive. It is that premise and that hope which framed President Obama’s climate discussion in his State of the Union message.

It was only a few paragraphs, but he gave climate advocates some powerful language we have long needed—and which emerged only after extended internal debate within the White House.

The President began not with climate but with pocketbooks. “In fields from Iowa to Texas, wind power is now cheaper than dirtier, conventional power. On rooftops from Arizona to New York, solar is saving Americans tens of millions of dollars a year on their energy bills.” Telling the truth that clean energy is now cheaper was something the administration long resisted—first because the data has only recently become clear that this is the truth and second because White House staff feared that even if true, the public was not ready to believe.

Only a few months ago, when Vice-President Biden spoke to a very friendly Renewable Energy Conference in Las Vegas, he hedged: solar power he said, was getting “awfully close to the cost of coal.” In November the White House promised only that “By 2030, climate commitments could make clean energy less costly than even our cheapest fossil resources.”

So to be as direct as Obama was in the State of the Union message is a big shift. Why? Well, the data keeps getting stronger. Recent polling demonstrates that the public is far more ready to believe this than only a few months ago. But I think an important ingredient is that the idea that cheaper = cleaner is at the heart of the Paris agreement that the President just worked so hard to bring home. After all, Paris is voluntary. Countries do have competing priorities and concerns. Only if we are ready to embrace the affordability argument for decarbonization will we get it done in time.

How are we doing?

Remarkably, only a month after the Paris Agreement was ratified, many of the world’s biggest emitters have taken aggressive and substantial steps to redeem their voluntary pledges. The Obama Administration, which just before Paris stopped oil leasing in the Arctic Ocean and blocked the Keystone Pipeline, has slapped a nationwide moratorium on coal leases on public lands. New York State has become the ninth state to go coal free and the number of coal power plants with firm shut-down dates in the U.S. has reached 228.

China quintupled the fee it charges coal users to help support renewable energy development, projecting it would increase its renewable capacity by 21 percent in 2016. (China ended 2015 having installed 40 percent of the world’s total new renewables. At 21 percent a year, China’s renewable capacity will have more than doubled by 2020.) As a result of its growing renewables and greater efficiency, China, the biggest global carbon emitter, cut coal consumption by 5 percent in 2015 for the second year in a row, coal power generation by 4 percent and banned the initiation of new coal mines. And as global oil prices slumped, China quietly ceased passing the reduced cost of crude on to gasoline and diesel users, effectively putting a $40/bl floor under oil prices to ensure that cheap oil did not drive increase consumption and emissions.

India accelerated pending tough new pollution rules for autos by moving the deadline up four years, while in the same month announcing much tougher emission requirements for coal fired power plants. The government in New Delhi even experimented with banning half of the city’s cars from the roads to reduce lethal levels of air pollution.

In Canada, in the wake of the U.S. rejection of Keystone XL and the government of Alberta’s commitment to set a permanent cap on carbon emissions from tar sands producers in the lead up to Paris, the newly elected Liberal Government banned tanker traffic off the Northern Coast of British Columbia, effectively blocking construction of the proposed Northern Gateway Pipeline. Weeks later the government of British Columbia strongly opposed a third pipeline, Kinder-Morgan’s TransCanada route, leaving Tar Sands Producers with no clear route to expand their pipeline to market capacity.

The previously climate skeptical Australian government has now resumed supporting wind energy as part of its national renewables strategy and as a result awarded contracts for its cheapest wind energy ever.

In Europe, Southern European utilities which have continued to shift to renewables (it is sunnier in Spain!) are now outpacing their normally more profitable northern competitors, as they accelerate their wind and solar portfolios. The last British underground coal mine, Kellingsley, closed, even as the Conservative government promised a 2025 end to all coal burning in the UK, making the nation that launched the coal revolution the first to formally renounced it.

Morocco, already viewed as a huge solar power, awarded the cheapest wind power bid every, anywhere, $.03.kwh and promptly announced that it would invest $40 billion in renewables and obtain 52 percent of its electricity from renewables.

Of course there are counter-currents. Australian officials gave another round of permits to a massive coal extraction projects in the Galillee Basin. Countries in South East Asia are still teeing up massive number of coal plants, even though their citizens are resisting—and Japan and Korea still seem willing to finance them. British Prime Minister Cameron, while pledging a coal phase-out, is also stalling on his country’s commitment to renewables.

But the forward momentum is at meaningful, perhaps astonishing scale for a single month. Clearly many of them were in the works before Paris, but there is no hint that 200 nations went to Paris, made their pledges and then forgot them. Obviously most of the record breaking 329 billion invested in clean energy in 2015 was committed well before the shape of the Paris Accord was clear.

What really happened, however, is even more hopeful—Paris commitments reflected a new economic and clean energy reality, they are trailing, not leading indicators. The numbers matter. A new report by the IRENA—International Renewable Energy Agency—concluded that if renewable electricity made up just 36 percent of the global energy mix by 2030 and energy efficiency kept pace with that contribution, the global economy would be on track to meet the 2 degree limit, if not the 1.5 degree pathway really needed. And many of the national efforts described above will get well above 36 percent by 2030—so global leaders are now on pace to rescue the climate.