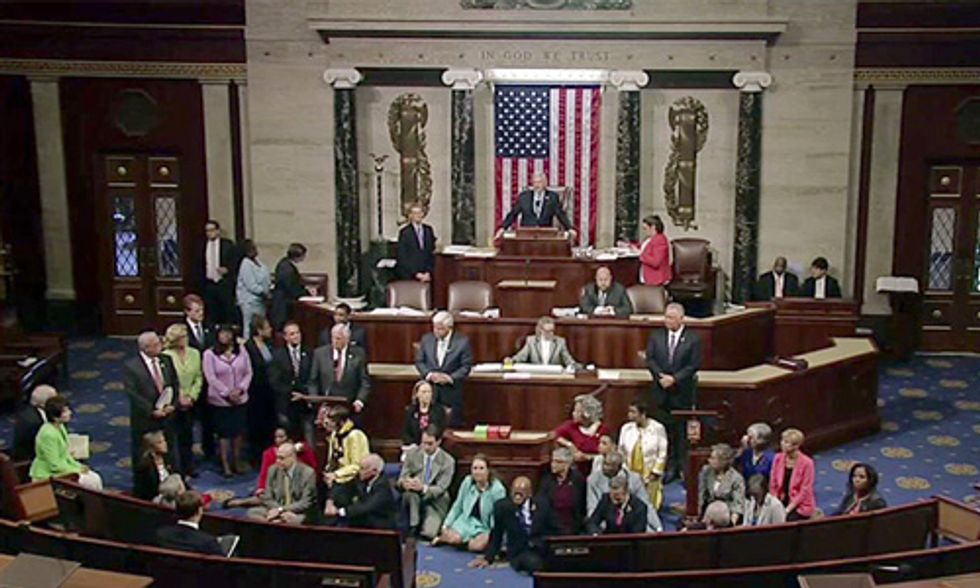 The House Democrats' 24 hour gun control sit-in, led by civil rights champion John Lewis (D-GA), has clearly elevated the gun issue in this fall's campaign. Republicans clearly worry the gun issue will hurt them—that's why they are so resolute to avoid duplicating the vote Senators cast last week. They don't want to be caught between the National Rifle Association (NRA) and the public—and perhaps between the NRA and their unreliable presidential candidate, Donald Trump.

If Maine Senator Susan Collins' gun safety compromise passes the Senate, the odds that Speaker Ryan will allow a vote on such a measure go up, giving at least some Republicans in marginal districts a chance to stand up to the gun lobby.

But Ryan could easily decide not to schedule such a vote, simply because he fears weakening the Speakership if he rewards the unprecedented uprising that House Democrats have launched.

I have no idea where, if the deadlock continues, the House may end up as an institution. History suggests that inertia will prevail and that the operating principals Ryan laid out to his caucus when he took the Speakership—no compromise with the minority—will reassert themselves.

Basic changes in the rules of the House and the role of the Speaker occur very rarely—40 to 60 years has been the norm—and only when there is a major split in the majority party. In 1910 42 House Republicans crossed the aisle to vote with the Democratic minority to strip Republican House Speaker Joe Cannon of the bulk of his powers. The House which emerged—effectively governed by a coalition of committee chairman locked in place by the seniority system—survived until 1974, when liberal Democrats revolted and restored the party of the Speaker to control the Rules Committee and the House floor. Again, it was a split within the majority that produced reform.

But it has been 42 years since the current ground-rules emerged and my gut tells me that we may be on the cusp of yet another major change in how the House is ruled. Any new order will certainly emerge only after the November elections. What it will be is a mystery.

Here's why I think change may be brewing—even if such change was not the goal of John Lewis in launching his sit-in, aimed pretty purely at demanding a vote on gun safety:

1. While the structure put in place by liberal Democrats in 1974 remain, the underlying politics have changed utterly. In the 1970's members of Congress were largely free from party discipline, both parties contained a broad ideological spectrum and coalitions were routinely assembled from both sides of the aisle.

Today both Republicans and Democrats are vastly more ideologically coherent. Republicans, in particular, are expected to hew to a European parliamentary discipline, a major break from what the Founding Fathers were aiming at. This change almost guarantees a dysfunctional and unpopular Congress, because the anti-majoritarian rules in the Senate make it very easy for a coherent minority to prevent the majority from governing. Gridlock is the new normal.

2. Ryan is saddled with the Hastert Rule. (It may be appropriate that yesterday was the date on which Hastert had to report to federal prison to serve his 15 month Senate for sexual molestation). Republicans no longer view the Speaker as representing the House; he is really the Speaker of the Caucus. That means that Ryan effectively manages the House in the interests of his most extreme members, those least willing to find common ground with Democrats. This forces him—or any Republican Speaker—to put his swing members, those who keep the Republicans in the majority, at risk, in any moment in which public sentiment turns sharply against the right.

3. Gun safety has given the Democrats one such issue. Focusing on who can buy guns, instead of which guns the rest of us makes the gun issue law and order, not big government. The current majorities for “No fly, no buy" and “Universal background checks" are staggering. But gun safety is not the only issue on which modern conservatism, of the kind Reagan brought to prominence, has lost its popular base. One of the major messages of Donald Trump's candidacy is that on a wide variety of issues, from social security to trade to money in politics, Republican orthodoxy, as well as the Republican brand, are politically toxic—even for the party's Presidential nominee.

4. Ryan's actions, in shutting down the TV cameras and refusing to schedule a vote, are not abuses of the powers of a modern Speaker. When she was Speaker, Pelosi did precisely the same things. But most Americans do not understand the majoritarian nature of the House or the need for a strong Speakership to enable the majority to rule. So it will not be difficult for Democrats to portray Ryan as heavy handed however deftly he manages this challenge to the current order in the House.

5. These factors all make the fall election even more challenging for Republican House members in swing districts and embolden Democrats. What's most intriguing about this battle for the future of the House is that it won't be solely driven by members. It will be shaped by the degree to which the uprising John Lewis launched resonates with the broader public and becomes part of this year's highly unpredictable campaign season. That's truly unprecedented.

Earlier battles over governance of the House were organized and waged by members of Congress and their fights had little public engagement. But Lewis, in part by choosing a “sit in," the classic outsider, disruptive action, as his mechanism, thrust this challenge very much into the public space, generating a spontaneous rally outside the capital and bringing social media to the fore around the rallying cry? “No vote, no break," a procedural demand, not a policy one.

Much respect to all the brave & resilient members of congress involved in the #SitIn. Blessings. Things must change. https://t.co/fmTrJozoZD
— Tichina Arnold (@Tichina Arnold)1466623118.0

Fifty years ago I participated in my own last sit-in; in Boston's Federal Building, around the issue of protecting civil rights organizers in the South. Who called for that action? John Lewis, then with the Student Non-Violent Coordinating Committee. Did we get what we asked for? No. But instead, Lyndon Johnson opted for the Voting Rights Act and changed American politics forever. It will be intriguing to see what Lewis's latest—and likely his last—sit-in finally yields.