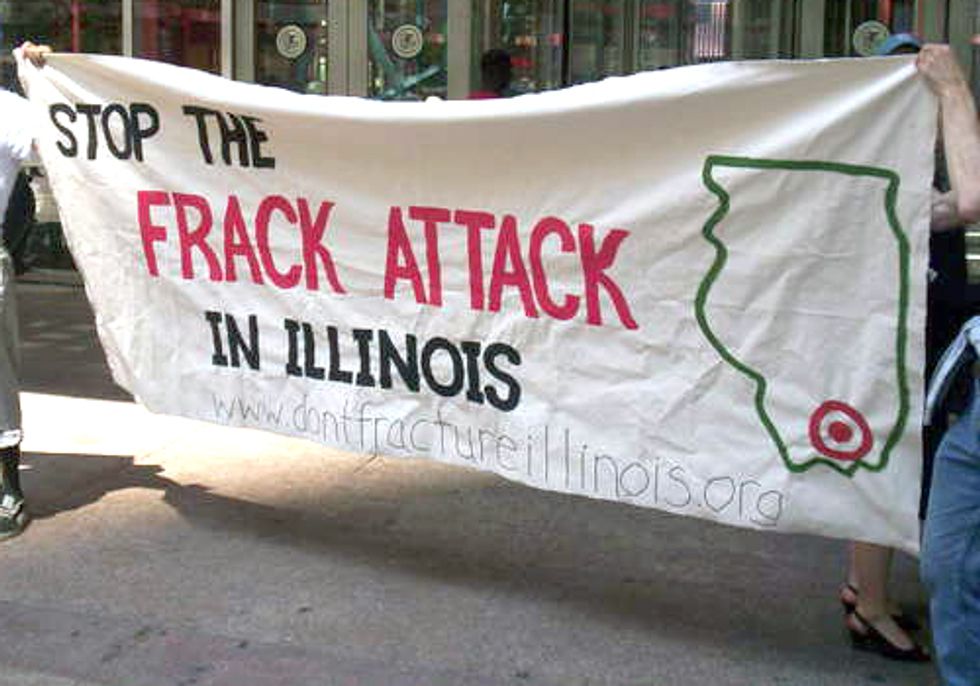 In a unanimous decision, the Carbondale City Council passed a resolution on Nov. 13 calling on the Illinois General Assembly to “enact a moratorium on high volume horizontal hydraulic fracturing until such time as the health and environmental concerns of the people of Illinois are addressed." In this decision, Carbondale joins the Illinois towns of Carlyle, Anna and Alto Pass, and Union and Jackson Counties in taking action supporting a moratorium, becoming the largest city yet to do so.

Horizontal high-volume hydraulic fracturing is a new technique for extraction of natural gas contained within shale rock. The technique, recently popularized by its controversy and environmental impacts in Ohio, Pennsylvania and elsewhere, involves pumping millions of gallons of freshwater mixed with toxic chemicals and silica sand into horizontal wells at high pressure to break up shale rock and release natural gas.

“In every state where fracking has occurred, impacts such as severe illness, polluted and depleted drinking water, hazardous waste leaks, earthquakes, explosions and air pollution have come with it—no state has shown that it can be done safely,” argued Bruce Ratain, a clean energy associate with Environment Illinois.

Though horizontal fracking is still on the cusp of commencing on a large scale in Illinois, the state already has notable scars from traditional vertical fracking, considered less dangerous than new high volume, high pressure horizontal fracking. Barb McKasson, chair of the local Shawnee Group of the Illinois Sierra Club related one jarring story:

"We started going to counties testing water, and through that process met Steve Combs, who lives in White County. His life has been ruined by fracking; his health is very poor. Steve had stopped drinking the water from his well, but didn’t realize that simply showering in the contaminated water could still make him sick. His neighbors’ wells are also affected, and this is just from vertical fracking. The horizontal hydrofracking is ten to a hundred times higher in volume and impact."

The decision on Nov. 13 demonstrates an awareness of fracking’s impact in a city often associated with fossil fuel production. “In Fort Worth, they have frack pads right next to schools…the council members came to realize that we need more protection than our current zoning laws,” noted Lynn Waters, a local resident and activist with SAFE (Southern Illinoisans Against Fracking) who addressed the council.

“This is educating the citizens of Carbondale to realizing that just because they live in the city, they’re not immune to the effects of fracking that might occur next door, and, it has taken place within cities,” noted McKasson, who also spoke at the hearing.

A statewide coalition of groups including Environment Illinois, SAFE and the Sierra Club has been pushing for a statewide moratorium on fracking, presented in SB 3280 currently before the state legislature. “Carbondale has taken a stand for public health and the environment. Now it's time for Illinois to stand up for them and communities statewide by passing a moratorium,” concluded Ratain.