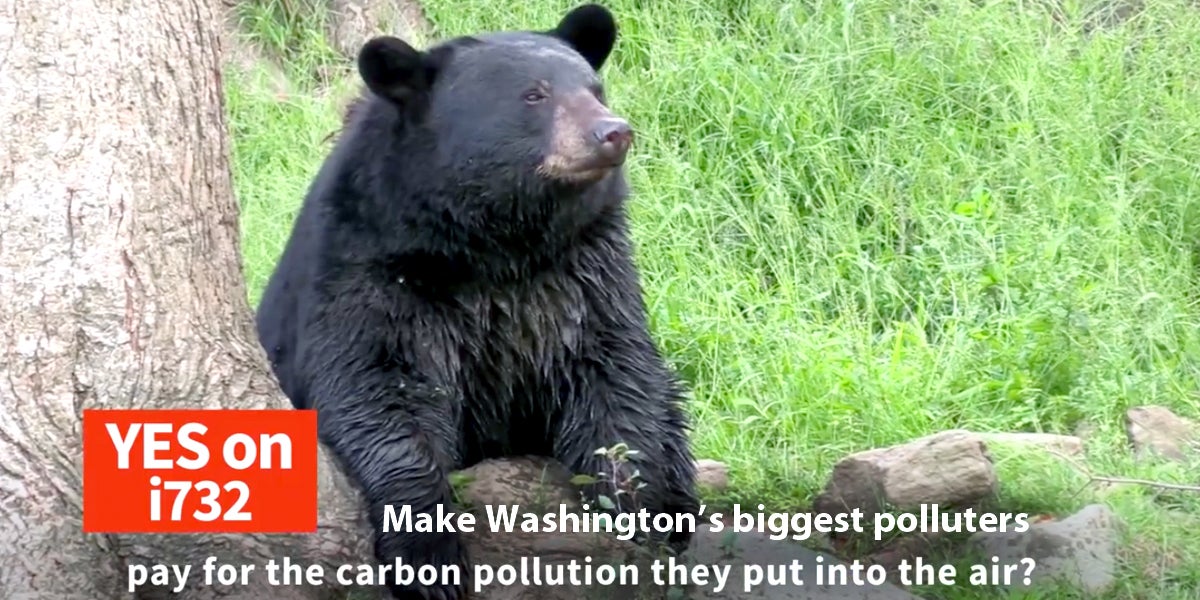 By making Washington the premier American government to place a price on carbon, Evergreen voters will pioneer the trail away from our deadly carbon addiction and its murderous offspring: climate chaos.

September shattered the record for hottest month ever recorded and 2016 will be measured as human history’s hottest year as was 2015, and 2014 before that. Humanity is already paying a high price for carbon—melting glaciers and barren, acidic oceans, biblical droughts, famines, floods, fires, plagues and great cities drowned by newly routine superstorms. Raging forest fires in Washington state obliterate property values and spawn epidemics of asthma and premature death. Weather related disasters have cost Americans more than $1 trillion dollars in the last 30 years.

While Americans suffer, big polluters are getting away with murder and getting rich in the process. Despite last year’s losses, Shell, BP and Exxon reported a decade of record earnings that exceeded the greatest profits of any industry in human history. Our federal government has failed to address the crisis. A billion dollars in campaign contributions from the carbon tycoons has paralyzed congress. Big oil’s indentured servants on Capitol Hill have blocked every effort to mitigate the climate apocalypse. Pricing carbon isn’t even on the table.

And so, our nation looks to Washington state for leadership. On Nov. 8, just four days after the Paris climate agreement became international law, Washington state can step boldly into the leadership breach left by federal abdication.

For the 20 percent of undecided voters, here is how I-732 works. The proposed law puts a price on carbon pollution, starting at $15 per metric ton. For reference, a typical car emits about five metric tons of carbon dioxide per year. That price will steadily, and predictably increase over a few decades until it hits $100 per metric ton, adjusted for inflation.

The state will return all these payments to taxpayers in the form of a full percentage point decrease in the sales tax, plus up to $1,500 for a Working Families Tax Credit for low-income families. This makes the referendum “revenue neutral”—the government neither gains nor loses money. The scheme is one of simplest and most effective ways to reduce emissions immediately.

Some environmentalists oppose the Initiative arguing that revenues should go to green energy infrastructure. That, indeed, would be the best outcome. But we shouldn’t make perfect the enemy of the good.

And a lot of good will come from this law. State sales taxes will drop. Rather than pay more to burn fossil fuels, polluters will switch to cleaner, more efficient energy and technology yielding cleaner air and water and better health for Washington’s citizens.

Dirty fossil fuel polluters will finally pay the true costs that they are now imposing on America’s citizens. Globally, taxpayers pay more than $5.3 trillion to subsidize the oil, gas and coal industries. By turning off this pipeline of massive socialist style subsidies, Initiative-732 will level the playing field for clean energy technologies. Wind, solar, electric vehicles and energy efficiency will finally compete head to head against filthy and expensive dinosaur fuels for which the economic rationale has expired. Those new energy sources produce abundant, high-paying sustainable jobs and democratize our energy markets.

By voting yes on I-732, Washingtonians will not just preserve the environment for children. They will pave the way for a national transition to the clean energy future.

I hope Washington voters will step up and show the federal government that the visionary, idealistic, can-do leadership is alive and well in America and it’s living in Washington state.