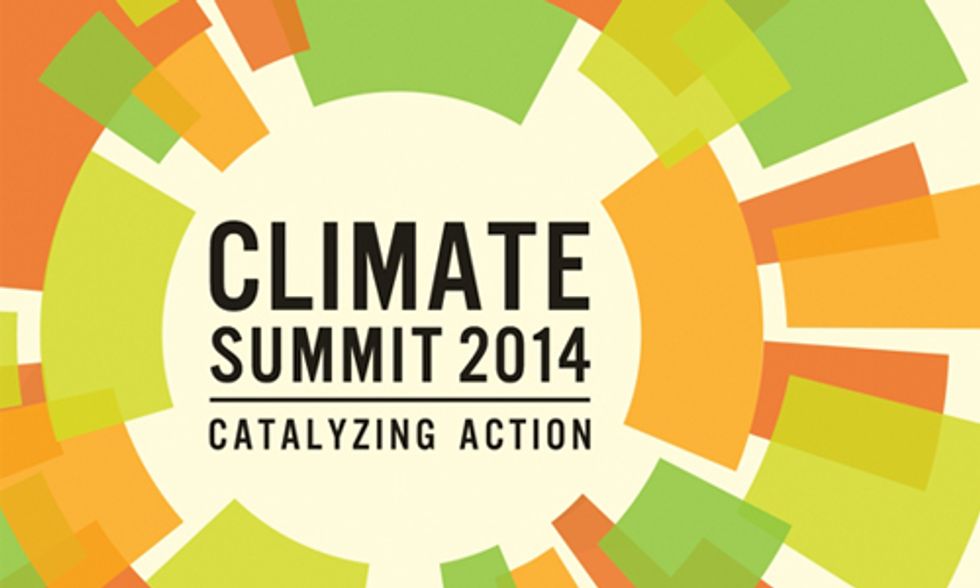 The United Nations will host dozens of governments, corporations and non-governmental organizations (NGOs) during a one-day Climate Summit 2014 in New York on Sept.23 but, according to scientists and environmentalists, the meeting will deal mainly with only one limited way of fighting climate change: carbon pricing.

In recent years the UN has proven incapable of playing an important role in slowing world climate change in a meaningful way, and is now practically dictated to by a powerful lobby.

“On the climate issue, the world’s biggest corporate polluters and pushers of unsustainable rates of consumption are hell bent on maintaining ‘business as usual’ and are working alone and in groups [and at the UN] to ensure that climate policies will not interfere with the profitability of their operations” says a research paper produced by Canada’s highly-respected Polaris Institute.

Because the UN and governments are not making enough progress, as many as 200,000 environment supporters from all over North America are expected to take part in four days of protests in New York leading up to the UN Summit. More than 1,000 groups are backing the protests, hoping to advance the environmental cause in the eyes of the public and with governments.

About 120 heads of state are expected to attend, including U.S. President Barack Obama and U.K. Prime Minster David Cameron. Canadian Prime Minister Stephen Harper, who will be in New York for another event, will take part in only the luncheon discussion concerning carbon pricing.  Among those absent will be the leaders of China and India, according to Bloomberg Businessweek.

The summit will, among other things, hold brief discussions on theme areas such as climate, health and jobs, a climate change photo contest run by a newspaper that the UN says may be the largest ever, and a week of fun events around New York.

But what the corporations really want from a private, exclusive luncheon during the Summit is to get UN support to increase the corporate preferred action against climate change: the expansion of carbon pricing systems. The most powerful UN committee is loaded with the most influential corporations from around the globe, companies such as Coca-Cola and Cisco from the U.S., Siemens from Germany, CEMEX from Mexico, Banco do Brasil, Sinopec from China, etc.

Corporations are willing to have governments create carbon markets that will regulate how much carbon businesses are allowed to emit into the atmosphere. If corporations exceed their limit, they are, in effect, fined. But if they are under their limit, they can sell their excess credits to another company that hasn’t met its limits, often walking away with a big profit.

“Carbon pricing is a critical tool to address climate change, and momentum is building to put in place carbon pricing schemes,” says one UN document. “Nearly 40 countries and more than 20 cities, states and provinces use carbon pricing mechanisms such as emissions trading systems and carbon taxes or are preparing to implement them.”

But there are problems.

First, many corporations want to implement only carbon pricing systems. But the Union of Concerned Scientists (UCS) says: “A cap-and-trade program alone would not be sufficient to meet the challenge of climate change.”

UCS says many other actions are required, such as having utilities to generate a higher percentage of their electricity from renewable energy, requiring automakers to increase vehicle fuel economy standards, stronger energy efficiency policies and policies encouraging smart growth.

Meanwhile, emissions are worsening. Earlier this month the World Meteorological Organization voiced concerns that, far from falling, the concentration of carbon dioxide in the atmosphere increased last year at the fastest rate for nearly 30 years. There are worrying sings that oceans and biosphere seem unable to soak up emissions as quickly as they used to.

Activist such as Naomi Klein are highly critical of carbon pricing programs because they can be manipulated. Earlier this month Klein told In These Times that such schemes create perverse incentives, allowing manufacturers to produce more harmful greenhouse gases, just to be paid to reduce them. In the process, carbon trading schemes have helped corporations make billions—allowing them to directly profit off the degradation of the planet.

While the UN will welcome powerful corporations in New York, it will strictly control the participation of NGOs. NGOs were not permitted to decide among themselves who will be allowed into the summit. Instead, the UN selected four civil society speakers and 34 additional civil society attendees from the 544 nominated groups. The approved groups will not be permitted to take part in the high-level carbon pricing session.

Protestors will launch their activities in New York on Friday, Sept. 19 with plenaries, speak-outs and teach-ins. The main march will take place on Sunday several blocks away from the UN, on the other side of Manhattan Island. The march will be closely monitored by New York’s often-brutal police force.

The more radical protestors will target the “climate profiteers” on Wall Street on Tuesday, Sept. 22, the day before the UN Summit. Protestors can receive non-violent direct action training, and will hear pep talks from journalists/activists Naomi Klein and Chris Hedges.

According to the organizers, large protests and occupations will take place in financial districts in hundreds of communities around the world.

The New York summit is considered to be a warm-up for the much more significant 2015 UN Conference on Climate Change to be held in Paris. It is too soon to tell how much influence corporations will have during this important gathering. With carbon emissions continuing to reach record levels, and large amounts of affluent now coming from emerging states, such as China and India, the 2015 meetings will be under tremendous pressure to come up with a world-wide agreement to slow carbon emissions.

Nick Fillmore is a freelance journalist and blogger who spent more than 25 years with the Canadian Broadcasting Corporation as a senior editor and investigative journalist. A former president of the Canadian Association of Journalists, he can be reached at: [email protected].