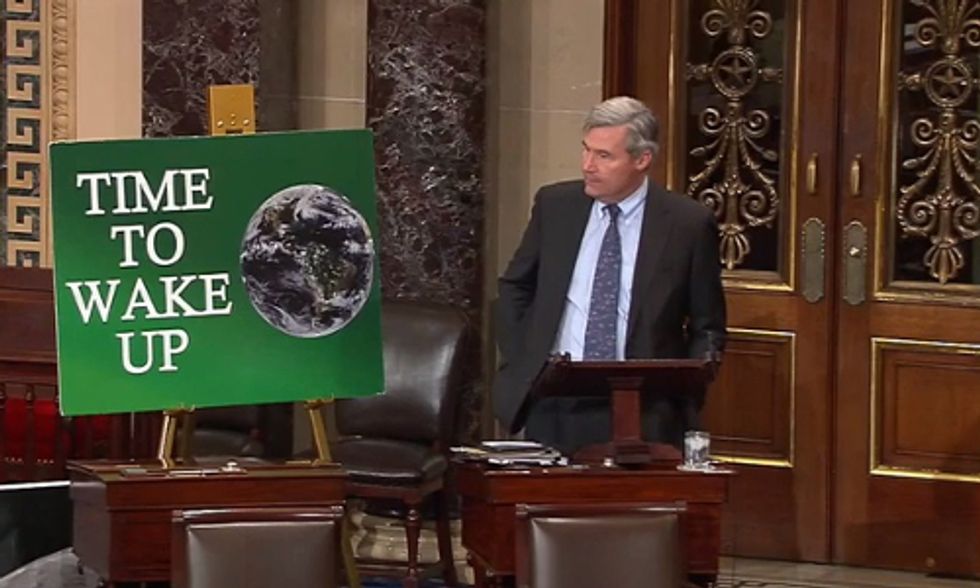 While some of his Democratic colleagues joined with Republicans in pushing the Keystone XL pipeline, Rhode Island Senator Sheldon Whitehouse and Hawaii Senator Brian Schatz had something different in mind. Today they unveiled the American Opportunity Carbon Fee Act.

Whitehouse, chairman of the Senate Environment and Public Works Subcommittee on Clean Air and Nuclear Safety, has long been an advocate for climate action. His official website features a page called “Climate Change: Time to Wake Up” and he has made 80 speeches in the Senate on the topic, giving one per week. In late October, he announced that he would propose a carbon pollution fee, with details to be introduced in the next few weeks. Today he revealed those details.

In his speech today, he pointed out the environmental impact of carbon emissions from burning fossil fuels. He said it is "changing the atmosphere and the oceans. We see it in storm-damaged homes and flooded cities. We see it in drought-stricken farms and raging wildfires. We see it in fish disappearing from warming, acidifying waters. We see it in shifting habitats and migrating contagions." And those things, he said, carry costs to homeowners, businesses and taxpayers—the "social cost of carbon."

"None of those costs from carbon pollution are factored into the price of the coal, oil or natural gas that releases this carbon," he said. "The fossil fuel companies have offloaded those costs onto society. That's just not fair. By making their carbon pollution free, we subsidize fossil fuel companies to the tune of hundreds of billions of dollars annually. By making their carbon pollution free, we rig the game, giving polluters an unfair advantage over newer and cleaner technologies. It’s a form of cheating, and corporate polluters love it because it gives them advantage. But it's wrong."

The American Opportunity Carbon Fee Act would attempt to restore some justice in factoring those costs. It would also assess a fee for other greenhouse gas emissions in addition to carbon, but only on the largest polluters who emit more than 25,000 tons a year. And it proposes a tariff on products from countries that don't price carbon, in order not to put U.S. businesses at a competitive disadvantage. The bill, Whitehouse said, would level the playing field for clean technologies like wind and solar to compete with dirty energy sources.

Whitehouse estimated the tax could generate between $1.5 trillion and $2 trillion in the first decade. The bill would establish the American Opportunity Trust Fund to return the money to citizens in a variety of possible ways. They could, he said "include tax cuts, student loan debt relief, increased Social Security benefits for seniors, transition assistance to workers in fossil-fuel industries or even direct dividends to American families."

Whitehouse referenced conservative voices in defense of his idea, including the late economist Milton Friedman, President Reagan's economic adviser Art Laffer and President George W. Bush's Treasury Secretary Hank Paulson, whom he quotes as saying earlier this year, "A tax on carbon emissions will unleash a wave of innovation to develop technologies, lower the costs of clean energy and create jobs as we and other nations develop new energy products and infrastructure. Republicans must not shrink from this issue. Risk management is a conservative principle.”

"We simply need conscientious Republicans and Democrats to work together, in good faith, on a platform of fact and common sense," said Whitehouse, pointing to past bipartisan efforts to address carbon pollution. "We know it can be done, because it’s been done."

Whether it can still be done with the new, more extreme crop of climate deniers coming into office in January remains to be seen. But environmental groups greeted the bill with enthusiasm.

“Senators Whitehouse and Schatz have been steadfast leaders in the efforts to take meaningful action on climate, both administratively and legislatively," said Martin Hayden, vice president of policy and legislation at Earthjustice.

"They have been instrumental in supporting and defending the President’s Clean Power Plan and the ongoing efforts to get this critical safeguard finalized and implemented. The American Opportunity Carbon Fee Act will put a price tag on carbon pollution. Funds generated by any carbon fee must provide for climate justice, aid those most impacted by climate change and not subsidize pollution released into our air.”

"The American Opportunity Carbon Fee Act would both ensure polluters pay for their carbon emissions and generate significant economic benefits for the American economy," said Kyle Ash, Greenpeace senior legislative representative. "For years, the biggest corporate polluters have avoided the costs associated with their carbon pollution, putting the burden on the rest of us. It's time to support a way forward that holds industry accountable for the damage they are doing to our planet and our health."