Carbon Emissions: How Does Your State Score? 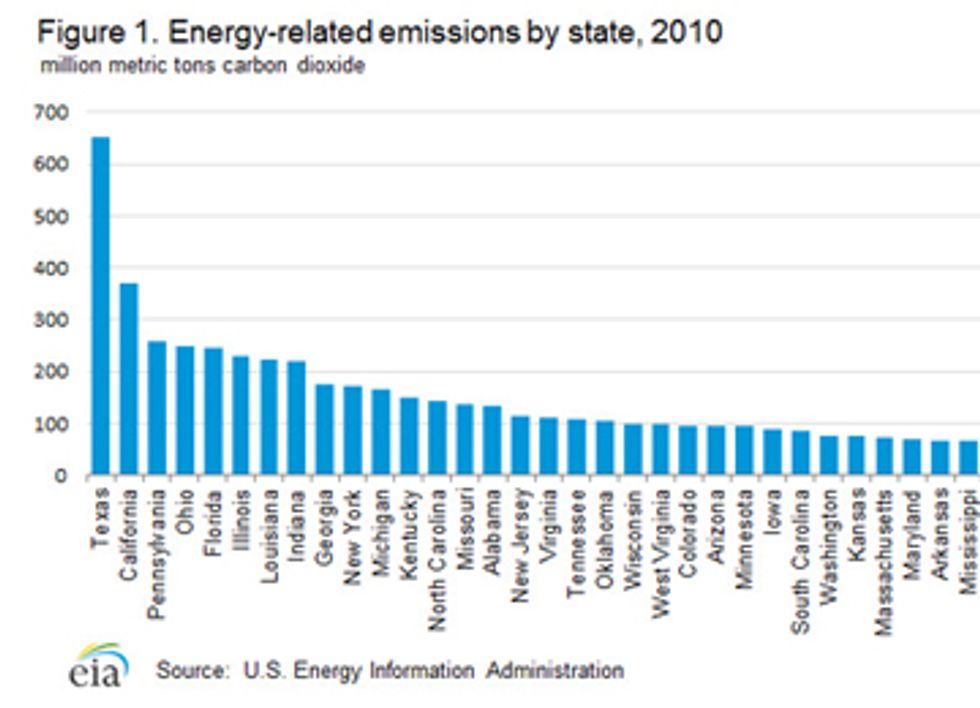 Yesterday, the U.S. Energy Information Administration (EIA) released the analysis, State-Level Energy-Related Carbon Dioxide Emissions, 2000-2010. Energy-related carbon dioxide (CO2) emissions vary significantly across states (Figure 1), whether considered on an absolute or per capita basis. The overall size of a state, as well as the available fuels, types of businesses, climate and population density play a role in both total and per capita emissions. Additionally, each state’s energy system reflects circumstances specific to that state. For example, some states are located near abundant hydroelectric supplies, while others contain abundant coal resources. This paper presents a basic analysis of the factors that contribute to a state's CO2 profile. This analysis neither attempts to assess the effect of state policies on absolute emissions levels or on changes over time, nor does it intend to imply that certain policies would be appropriate for a particular state.

The term "energy-related carbon dioxide emissions" as used in this paper, includes emissions released at the location where fossil fuels are used. For feedstock application, carbon stored in products such as plastics are not included in reported emissions for the states where they are produced.

It is also important to recognize that the state-level CO2 emissions data presented in this paper count emissions based on the location where the energy is consumed as a fuel. To the extent that fuels are used in one state to generate electricity that is consumed in another state, emissions are attributed to the former rather than the latter. An analysis that attributed "responsibility" for emissions with consumption rather than production of electricity, which is beyond the scope of the present paper, would yield different results.

Between 2000 and 2010, CO2 emissions fell in 32 states and rose in 18 states. However, from 2009 to 2010, only 14 states saw a decrease in emissions, as the U.S. was rebounding from the recession and energy consumption increased in most states, along with emissions.

From 2009 to 2010, only 14 states saw a decrease in emissions. The U.S. was rebounding from the recession and emissions from consumption of energy was up in most states. Because of differences in data aggregations it is difficult to compare the total for all states with the total for the U.S.

There can also be significant variations in terms of carbon dioxide emissions by sector—even for states that have similar fuel emissions' profiles. These variations are due to factors such as the use of different fuels for electricity generation, climate and sources of economic outputs (e.g., commercial versus industrial activity). For example, in Vermont the largest share of emissions in 2010 came from the transportation sector (58.7 percent), predominantly from petroleum, but the electric power sector share is small (0.1 percent) because of Vermont's reliance on nuclear power. Vermont's residential sector share was 22.1 percent—indicative of a relatively cold climate where petroleum is the main heating fuel. Hawaii, where a dominant share of emissions is also from petroleum, has a residential share of 0.3 percent—the lowest in the U.S. because of minimal heating and cooling requirements. The largest sector emissions share in Hawaii, like Vermont, was from the transportation sector (49.3 percent). However, unlike Vermont, Hawaii’s electric power sector share nearly as high (40.1 percent). The dominant fossil fuel for the generation of electricity in Hawaii is petroleum.

The state of New York, with a population of 19.6 million people, had the lowest per capita CO2 emissions—8.8 metric tons per capita. A large portion of the population is located in the New York City metropolitan area where mass transit is readily available and most residences are multi-family units that provide efficiencies of scale in terms of energy for heating and cooling. The New York economy is oriented towards high-value, low-energy-consuming activities such as financial markets. For example, in 2010, New York contained 6.3 percent of the U.S. population, but consumed only 1.1 percent of the country's industrial energy. New York's energy prices are relatively high (the average retail electricity price of 16.41 cents per kWh was third highest in the country in 2010), which in turn encourages energy savings. The second lowest per capita carbon emitting state (9.7 metric tons per capita) was Vermont. As mentioned above, Vermont had almost no emissions from its electric power sector. Other states with relatively low per capita emissions rates include: California (9.9 metric tons per capita), Idaho and Oregon (both 10.4 metric tons per capita).

Carbon Intensity of the Energy Supply

Carbon Intensity of the Economy

If the emissions associated with the generation of electricity were allocated to the states where that electricity is consumed, in many cases, the emissions profiles of both the producing and consuming states would change.