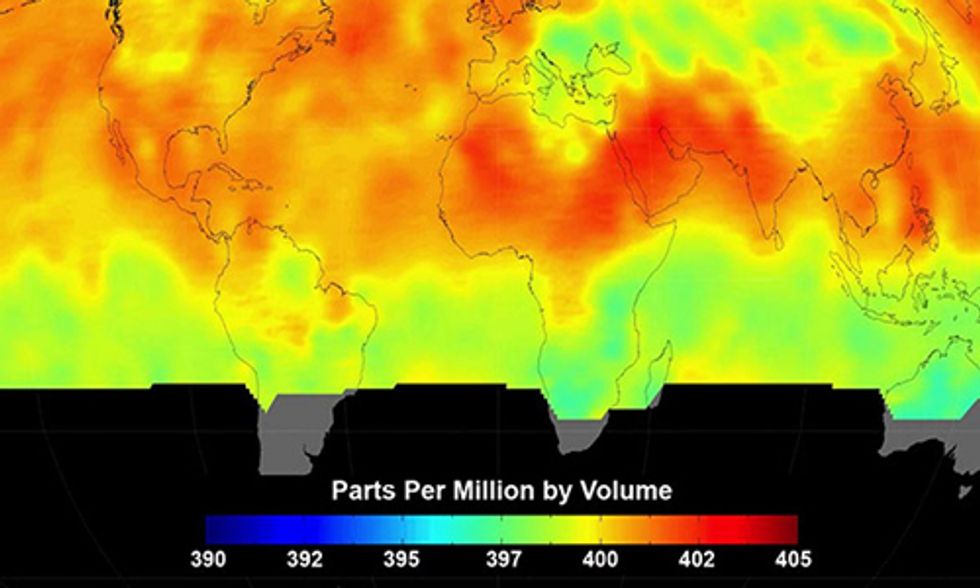 Record carbon dioxide levels are set to surpass the symbolic threshold of 400 parts per million (ppm) this year and will likely never fall below that line again in our lifetimes, according to a new study published Monday in the journal Nature Climate Change.

Scientists at the UK Met Office used emissions data, sea surface temperature figures and a climate model from the Mauna Loa Observatory in Hawaii to track the trajectory of CO2 levels and found that carbon dioxide "will for the first time remain above 400 ppm all year and hence for our lifetimes."

Emissions have increased over the past 12 months due to the continued burning of fossil fuels, but the impact has also been exacerbated by an unbridled El Niño event. Reports from earlier this year also found that 2016 is poised to become the hottest year in recorded history.

The findings highlight increasingly urgent concerns about global efforts to curb climate change as outlined in the Paris agreement negotiated last December and signed in April by nearly 170 nations.

"It's a sign we are still on track for a high emissions scenario. We won't be looking at below 400 ppm in our lifetimes," Richard Betts, co-author of the study and Met Office scientist, told Climate Home.

Higher CO2 rates are expected as El Nino warms and dries tropical land areas, slowing the uptake of carbon by trees and plants and increasing the risks of forest fires.

[....] If and when the world continues to warm as the UN's climate science panel predicts it will based on current rates of warming gases, the threat of more fires at that scale could rise.

The study also found that devastating forest fires in Indonesia in 2015 and 2016—which NASA scientists warned at the time were the worst climate crisis on Earth—may have fueled about 20 percent of El Niño's addition worldwide CO2 levels.

Carbon concentrations have passed the 400 ppm limit before, but never permanently. The new study confirms that those days may be over for good.

"Once you have passed that barrier, it takes a long time for CO2 to be removed from the atmosphere by natural processes," Betts told the Guardian on Monday. "Even if we cut emissions, we wouldn't see concentrations coming down for a long time, so we have said goodbye to measurements below 400 ppm at Mauna Loa."

The authors write: "In the longer term, a reduction in CO2 concentration would require substantial and sustained cuts in anthropogenic emissions to near zero."

The safe level of carbon dioxide in the atmosphere is around 350 ppm maximum, climate advocates say. But according to Betts, "We could be passing above 450 ppm in roughly 20 years."