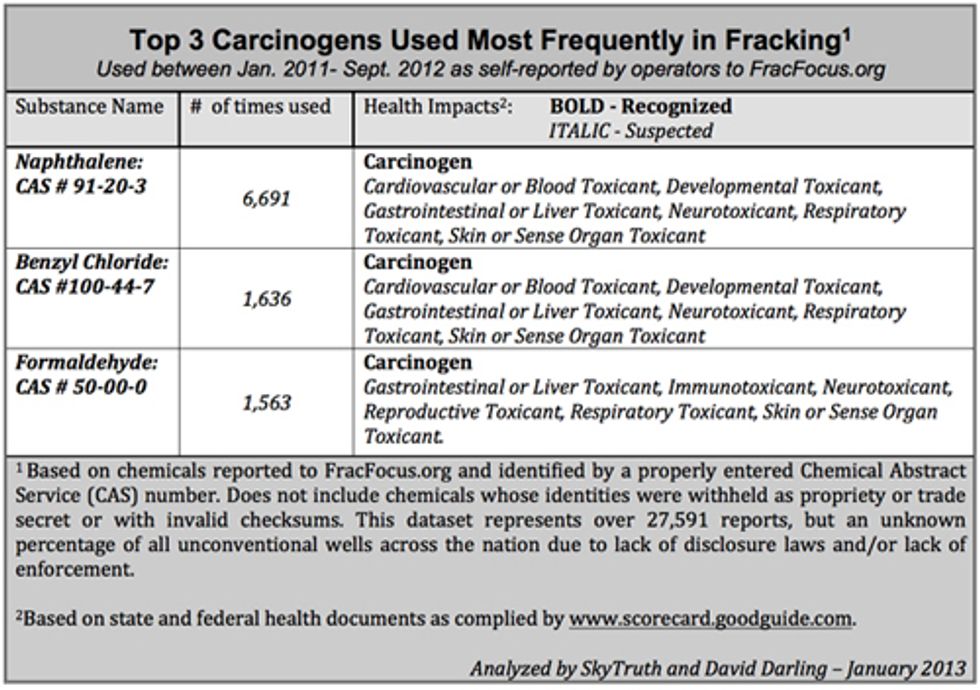 By David Manthos with Data Analysis by David Darling

Recognized carcinogens are used in one of every three hydraulic fracturing operations across the nation—according to industry self-reporting. Independent analysis of the SkyTruth Fracking Chemical Database by IT professional David Darling found that 9,310 individual fracking operations conducted between January 2011 and September 2012 disclosed the use of at least one known carcinogen.

While not all hydraulic fracturing operations or all chemicals used in the process are disclosed by the drilling industry, thanks to the lack of a uniform national disclosure law and exacerbated by the liberal use of "trade secret" exemptions, known cancer-causing substances such as naphthalene, benzyl chloride and formaldehyde were used in 34 percent of all fracks reported by industry to FracFocus.org.

Since creating a Fracking Chemical Database, which we released to the public back in November, SkyTruth has worked to quantify some of the issues related to fracking, but our main objective in building and publishing the database was to enable research on the subject by anyone interested. This approach has been fruitful in several ways, such as our work with Darling, an IT professional specializing in database and software programming, who enjoys working  with complicated datasets for his own professional development.

Darling has built powerful structured query language (SQL) tools to analyze our database and join it to others, which he writes about in very technical detail on his website. For those of us not familiar with database management and SQL language, we provide a layman's guide to his findings here.

Most recently, we asked him to compare the data from Goodguide.com's chemical profile Scorecard, originally a project of the Environmental Defense Fund to profile the respective hazards of more than 11,200 industrial chemicals. For recognized carcinogens, Scorecard provides a database compiled from California's Proposition 65 (P-65), source of the familiar phrase "known to the State of California to cause cancer." Under P-65, California manages a list of carcinogenic substances identified by health authorities such as the International Agency for Reaserch on Cancer and the Environmental Protection Agency's (EPA) Toxic Release Inventory (TRI).

Searching 27,000+ reports from the fracking database, Darling found 11,586 separate instances of recognized carcinogens used in hydraulic fracturing operations during the 20 months the database covers. However, in a long list of substances like Nitrilotriacetic Acid - Trisodium Salt Monohydrate (used 259 times) or ethylbenzene (used 134 times), three known carcinogens were used far more than all the rest:

Furthermore, when Darling expanded the search to include suspected carcinogens, a long list of substances from common household chemicals to arsenic and chromium, he found 24,861 fracks (or 90 percent of all reports) that listed using at least one suspected carcinogen in the fracking process.

Understanding that nearly all industrial processes pose some risk to public health, we think the routine use of these chemicals highlights an area in need of independent research and evaluation: What are the pathways for water, soil and air contamination from hydraulic fracturing that could potentially lead to human exposure? And how often do failures occur during drilling and fracking operations that could result in unwanted chemical migration along those pathways?

Hopefully the EPA's ongoing study of hydraulic fracturing safety is going to produce definitive, scientifically robust answers to these questions. Until then, here are a few relevant observations about likely pathways:

The risk of exposure to these chemicals should be thoroughly studied by pubic and occupational health experts, and their findings accounted for in regulatory and policy decisions about drilling and fracking. Full and open disclosure of the chemicals used at all stages of drilling and completion activity—including during hydraulic fracturing operations—is a necessary element of protecting public health. We recently provided specific recommendations for improved disclosure to the Bureau of Land Management (which just announced they will go back to the drawing board and publish an entirely new proposed rule for fracking on public lands at the end of March after criticism of the 2012 draft from both industry and environmentalists).

After searching for data from many sources, and hitting what he described as "the fracking wall" around data on oil and gas development, Darling concluded that, "FracFocus.org’s website at that time was intentionally constructed to make information extraction difficult." However, with open access to the information, researchers, citizen scientists and skilled professionals can begin to unravel some of the mysteries that surround the boom in unconventional oil and gas development.

To read David Darling's perspective on the FracFocus data and learn more about how he conducted this analysis, visit his website at Preliminary Analysis of FracFocus.org.