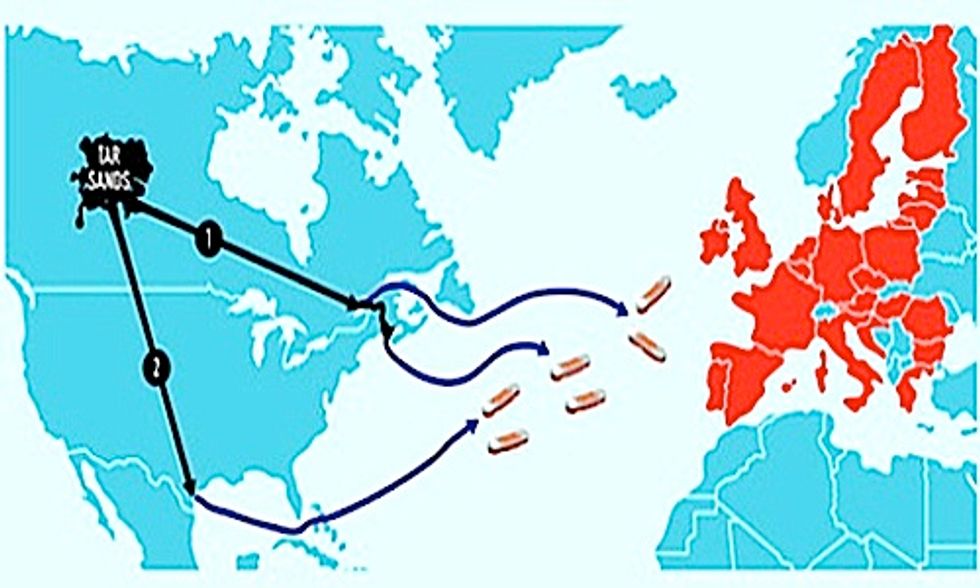 Recent developments in Europe and the U.S. are setting the groundwork for a surge in Canadian tar sands production.

In both regions, government leaders are considering proposals that would loosen import and export regulations for the fuel, which has been estimated to produce 23 percent more greenhouse gases than conventional oil.

The European Commission is currently grappling with the future of the Fuel Quality Directive (FQD), a 2009 order that requires a six percent reduction in the greenhouse intensity of transport fuels before 2020. The law is intended to calculate the carbon-intensity of fuels—including gasoline, diesel and biofuels—from extraction to combustion.

The FQD, however, has been hamstrung by inter-European disagreement over how these calculations should be structured. The powerful Canadian oil lobby, which views Europe as an attractive export market, has joined the fray, and has conducted more than 100 meetings with EU officials in hopes of permanently crippling the regulation.

A new white paper from the European Commission suggests that Canadian oil interests may be winning the war over Europe’s climate future. The document, which outlines long term EU climate goals, proposes eliminating the FQD after 2020 and omits any specific targets for reducing transport-related emissions.

At the moment, Canadian tar sands comprise only 0.03 percent of the European fuel supply. Without full enforcement of the FQD or the implementation other fuel regulations, consumption could skyrocket from about 4,00 barrels per day to close to a million per day by 2020. This increase is the equivalent of placing six million new cars on Europe’s roads.

While worries over a stripped down FQD in Europe are developing, on the other side of the Atlantic a new concern is growing as some American politicians call for an end to the 40-year-old crude export ban. Originally created to shield domestic consumers from volatile global oil prices, the ban is now also keeping shale oil in the ground as U.S. refineries reach peak capacity.

Two prominent U.S. Senators recently claimed they would consider introducing legislation to lift the ban if President Obama declines to take executive action to do so, and last week the Senate Energy and Natural Resources Committee held a hearing on lifting the ban. Meanwhile, federal agencies have begun granting re-export licenses that are sending oil from the U.S. to Europe for the first time since 2008.

The climate impacts of large-scale American crude exports cannot be understated. Lifting the export ban would almost certainly cause a rise in domestic oil drilling, and exports would likely surpass 500,000 barrels per day by 2017. According to a recent report by Oil Change International, crude exports would also raise overall greenhouse gas emissions.

Lifting the ban could also help to turn the U.S. into a conduit for Canadian tar sands. Under this scenario, Canadian crude oil would be extracted from tar sands deposits in Alberta, sent to American refineries in the Gulf of Mexico—either by rail or via the contentious Keystone XL pipeline—and then shipped to worldwide export markets.

A large-scale dismantling of the European FQD and an end to the American crude export ban would open the floodgates, allowing Canadian tar sands to flow into refineries and gas tanks the world over.

In view of the consequences of loosening current regulations, the apparent political passivity of leaders on both the European and North American continents is a sign that business interests are likely to trump the interests of containing the world’s warming to safe levels.