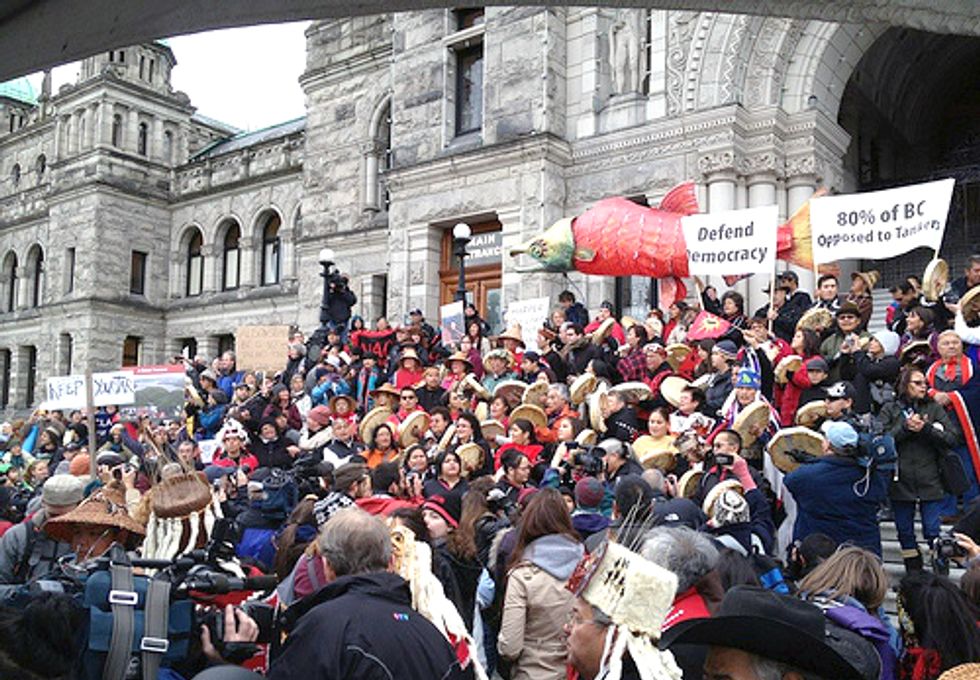 On Oct. 22, more than 3,000 people braved the rain and cold on the front lawn of the legislature of British Columbia to protest the Northern Gateway pipeline project.

Why, when so many people oppose the Enbridge Northern Gateway pipeline project, would government and industry resort to such extreme measures to push it through?

The problems with the plan to run pipelines from the Alberta tar sands across northern B.C. to load unrefined, diluted bitumen onto supertankers for export to China and elsewhere are well-known: threats to streams, rivers, lakes and land from pipeline leaks; the danger of contaminated ocean ecosystems from tanker spills; rapid expansion of the tar sands; and the climate change implications of continued wasteful use of fossil fuels.

The benefits aren’t as apparent. Some short-term and fewer long-term jobs, possibly for foreign workers, and increased profits for the oil industry—including state-owned Chinese companies—are all we’re being offered in exchange for giving up our resources, interests and future, putting ecosystems at risk and forfeiting due democratic process.

Our government is ramming through another omnibus budget bill, and is set to sign a deal with China, both of which seem aimed at facilitating the pipeline and other resource-extraction projects. Its first budget bill gutted environmental protection laws, especially those that might obstruct pipeline plans. It also limited input from the public and charitable organizations, and included measures to crack down on charities that engage in political advocacy.

The recent 457-page omnibus budget bill goes even further. Among other changes, it revises the Navigable Waters Protection Act (renamed the Navigation Protection Act) to substantially reduce waterways that must be considered for protection and exempt pipelines from regulations.

Meanwhile, the government is set to sign a 31-year deal on Oct. 31 that will give China’s government significant control over Canada’s resources and even over Canadians’ rights to question projects like Northern Gateway. The Foreign Investment Promotion and Protection Agreement would allow China to sue Canada, outside of our borders and behind closed doors, if the pipeline deal were blocked or China’s interests in our resource industry hindered; for example, if the B.C. government were to stop Northern Gateway. It also gives the Chinese state-owned companies “the right to full protection and security from public opposition,” as well as the right to use Chinese labor and materials on projects in which it has invested.

According to author and investigative journalist Andrew Nikiforuk, writing for the Tyee, “The deal does not require provincial consent. It comes without any risk-benefit analysis. And it can be ratified into law without parliamentary debate.”

Why would anyone want to sell out our interests, democratic processes and future like this? And why would we put up with it? On the first question, Gus Van Harten, an international investment law professor at Osgoode Hall Law School, told DeSmogBlog we must consider the possibility that government and industry know that changes in attitudes about fossil fuel extraction “may lead to new regulations on the oil patch, in that, climate can’t just be wished away forever, and that governments might take steps to regulate the oil patch in ways that investors wouldn’t like.” He continues, “If you bring in a lot of Chinese investments, and you sign the Canada investment deal, you kind of get the Chinese investors to do your dirty work for you.”

In other words, as the world recognizes the already extreme and increasing consequences of global warming and shifts from wastefully burning fossil fuels to conservation and renewable energy, tar sands bitumen may soon become uneconomical. The goal is to dig it up, sell it and burn it as quickly as possible while there’s still money to be made. It’s cynical and suicidal, but it’s the kind of thinking that is increasingly common among those who see the economy as the highest priority—over human health and the air, water, soil and biodiverse ecosystems that keep us alive.

What can we do? Prof. Van Harten has written to provincial governments urging them to ask the federal government to “stop the rushed ratification” of the China deal. We should all demand that our leaders put the interests of Canadians now and into the future ahead of short-sighted and destructive industrial ambitions. The budget bill and trade deal are not democratic in content or implementation. We need to take back democracy.