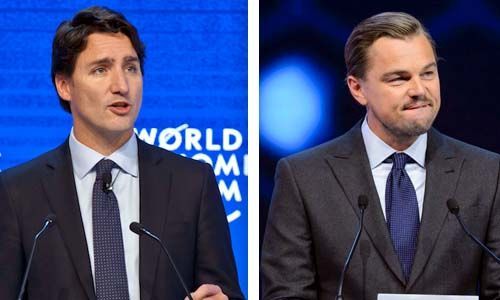 Canadian Prime Minister Justin Trudeau told Leonardo DiCaprio to tone down his “inflammatory rhetoric” on climate change, arguing it was not helping those who have lost their oil industry jobs.

Last week, DiCaprio blasted the “corporate greed of the coal, oil and gas industries” and said “enough is enough” in a speech at the World Economic Forum in Davos, Switzerland.

“We simply cannot afford to allow the corporate greed of the coal, oil and gas industries to determine the future of humanity. Those entities with a financial interest in preserving this destructive system have denied, and even covered up the evidence of our changing climate,” DiCaprio said. “You know better. The world knows better. History will place the blame for this devastation squarely at their feet.”

At a dinner later that day, Trudeau chided the actor and activist for his remarks. “I pointed out that both Alberta and Canada have new governments over the past year that are committed to action on climate change … and that there are families suffering, out of work, who need to be supported, and inflammatory rhetoric doesn’t necessarily help those families or help Canada,” Trudeau told reporters on Friday.

“He actually said if we took concrete action on climate change, he would be the first to come up and celebrate with us,” Trudeau added.

The Canadian prime minister also spoke at the economic summit last week, telling the audience of business and government elites that “Canada was open for business, and that his government plans to invest heavily in low-carbon industries,” Vice News reported.

DiCaprio has been critical of Canada’s energy policies in the past, particularly the tar sands. According to Vice, DiCaprio called out the oil industry in 2014 after traveling to the Albertan tar sands while filming a documentary.

“They drill, they extract, making trillions of dollars,” he said. “We must fight to keep this carbon in the ground.”

And in an interview with Charlie Rose earlier this month, DiCaprio cited the tar sands as evidence that “we’re systemically destroying … our planet on an unprecedented scale in human history.”

DiCaprio was at the World Economic Forum to accept an award for making important contributions to improving the state of the world. He was recognized for his work in tackling climate change through his Leonardo DiCaprio Foundation and as an UN Messenger of Peace. He announced during his speech that his foundation would be pledging a new commitment of $15 million to environmental projects.