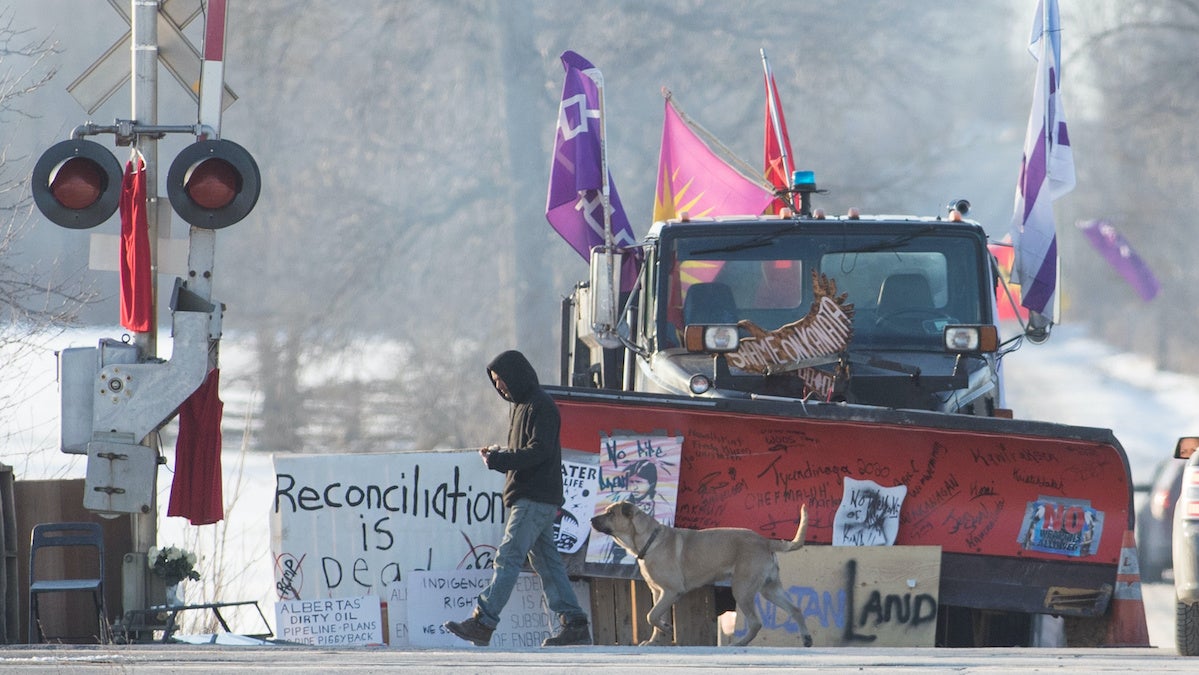 A First Nations protester walks in front of a train blockade in Tyendinaga, near Belleville, Ontario, Canada on Feb. 21, 2020. LARS HAGBERG / AFP via Getty Images

An indigenous rail blockade that snarled train travel in Canada for more than two weeks came to an end Monday when police moved in to clear protesters acting in solidarity with another indigenous community in British Columbia (B.C.), which is fighting to keep a natural gas pipeline off its land.

Ten members of the Tyendinaga Mohawk nation were arrested for participating in the rail blockade on their own territory near the town of Belleville, Ontario, The Guardian reported. After warning them they faced arrest, police rushed and tackled protesters before cuffing them. Remaining demonstrators then heeded community leaders’ calls to stand down.

“The video is pretty damning to watch,” University of Manitoba native studies associate professor Niigaan Sinclair told CBC News of the arrest footage. “It’s a video of dozens of police officers armed to the teeth, lined up with paddy wagons, prepared to throw individuals who are standing on their own territory into them.”

The blockade first went up Feb. 6 in response to another police raid. The Royal Canadian Mounted Police (RCMP) had cleared a protest camp set up by the Wet’suwet’en to block the construction of the billion Coastal GasLink pipeline in B.C. While elected Wet’suwet’en councils have approved the pipeline, hereditary chiefs oppose its construction on land they never ceded to the Canadian government.

The police action came after the rail blockade had disrupted travel for 103,000 Canadians and led to temporary layoffs of rail workers, The New York Times reported. Weeks of solidarity demonstrations across the country have involved both indigenous groups and non-indigenous protesters who oppose fossil fuel pipelines.

“Everyone involved is worried,” Trudeau said, as CBC News reported. “Canadians have been patient, our government has been patient. But it has been two weeks and the barricades need to come down now.”

He ruled out calling on the army, but his words were interpreted as a greenlight for police to move against the blockade, according to The New York Times.

Monday’s police action has set off other demonstrations, however. Wet’suwet’en hereditary Chief Woos has said protests would likely continue until the RCMP and pipeline workers left his nation’s territory, according to The Guardian.

Protesters set up a new rail blockade in Hamilton hours after the Belleville arrests, Global News reported. Demonstrations in B.C. also succeeded in canceling West Coast Express trains from Vancouver to Mission Monday, as well as blocking the Port of Vancouver and the steps of the B.C. legislature, CBC News reported.

In Manitoba, around 100 stopped traffic on Portage Avenue with a “die-in” outside RCMP headquarters, while another group occupied part of the Trans-Canada Highway in the afternoon.

“They’re just trying to support our relatives across Turtle Island,” Metis student Carter Graveline, who represents Indigenous Youth and Allies for Wet’suwet’en, told CBC News of the protests. “When one of our nations is under attack it’s like we all are.”