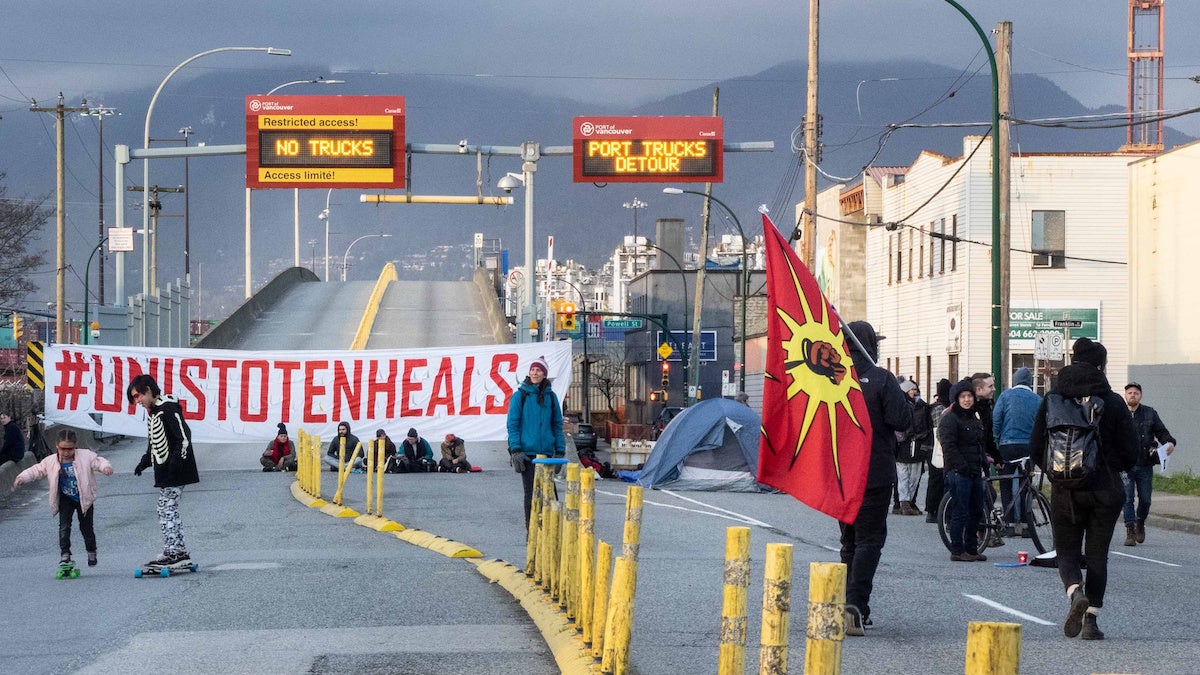 Demonstrators block the Port of Vancouver in support of the Wet'suwet'en, who are blocking a pipeline from being built on their land, on Feb. 9, 2020. Sally T. Buck / Flickr

Indigenous rights supporters held solidarity actions across Canada over the weekend as the Royal Canadian Mounted Police continued their raids on Wet’suwet’en land in British Columbia.

The Unist’ot’en Camp reported on its official Facebook page Sunday that at least 21 people had been arrested since Thursday, when, as Common Dreams reported, the RCMP conducted a violent pre-dawn raid to fulfill an injunction on behalf of Coastal GasLink, which aims to build a pipeline in Wet’suwet’en territory in northern British Columbia.

The camp uploaded several videos over the weekend of the resistance to the police, who were reportedly set to meet with Wet’suwet’en hereditary chiefs Saturday to discuss reconciliation regarding the injunction, which was filed despite a long-standing Canadian Supreme Court decision stating the Wet’suwet’en had not given up their homeland in the province. The RCMP reportedly refused to attend the meeting after arriving late.

According to Ricochet, the RCMP expanded its “exclusion zone” Saturday, taking control of most of the territory of the Gidimt’en, one of the five clans of the Wet’suwet’en.

“The exclusion zone has been created by the RCMP to force Wet’suwet’en land defenders off our land,” the Unist’ot’en Camp said in a statement. “It is a colonial and criminalizing tool to illegally and arbitrarily extend RCMP authority onto our lands. The massive exclusion zone, completely under RCMP authoritarian discretion, falls outside the injunction area. Chiefs and Wet’suwet’en people are illegally being denied access to their own territories.”

The neighboring Gitxsan Nation led a solidarity action on Saturday, blocking a rail line in protest of the RCMP’s actions, the injunction, and the Canadian government’s failure to intervene on behalf of the Wet’suwet’en people’s rights.

More raw footage from Jerome Turner of the Gitxsan blockade of rail lines near New Hazelton, B.C. happening now in solidarity with the #Wetsuweten. pic.twitter.com/4kUx5Epdas

Other rail blockades were reported across the country, and solidarity actions took the form of rallies and protests at government buildings in Canada as well as in the U.S.

52 hours in, and this Indigenous youth-led lockdown at the BC Legislature continues to grow.

Action shoot from today in Seattle. Marched from Westlake to the canadian consulate #AllEyesOnWetsuweten #WetsuwetenSolidarity pic.twitter.com/8NddhUl3Tg