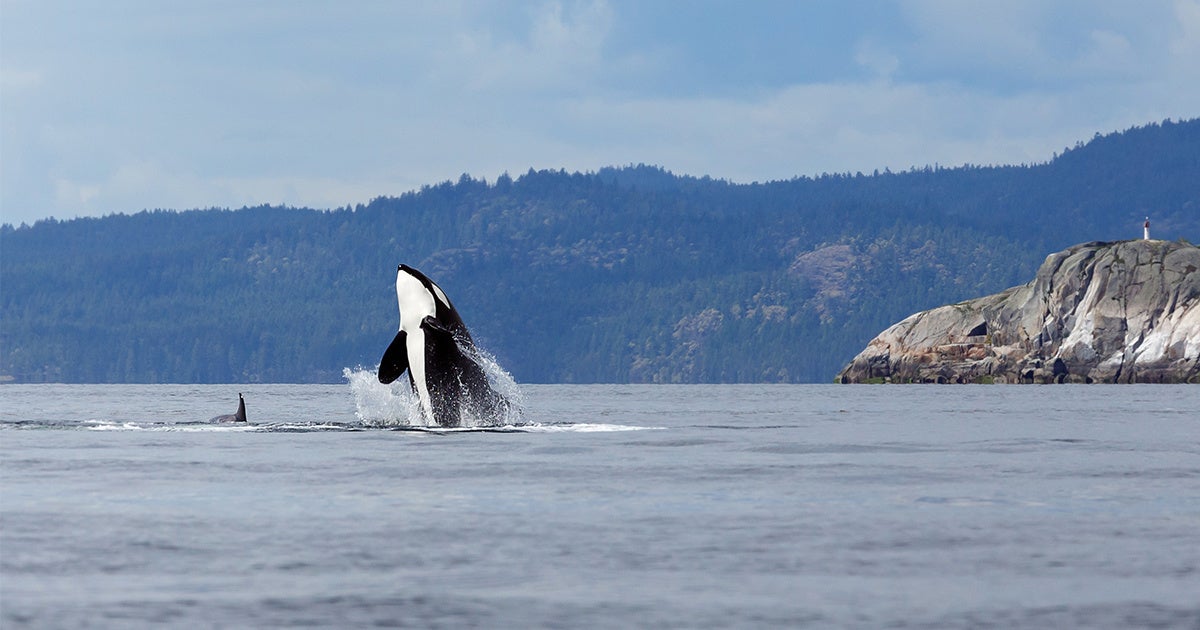 An orca jumps out of the sea in Lund, British Columbia. Schaef1 / iStock / Getty Images Plus

By the end of June, it will be illegal to keep whales and dolphins in captivity in Canada, the Huffington Post reported Tuesday.

The so-called “Free Willy” bill passed the Canadian House of Commons by an overwhelming majority Monday, CBS News reported. It now must pass through a process called “royal assent” in which either the governor general or their deputies sign off on the bill. It will make it illegal to keep cetaceans in captivity, breed them or import or export the intelligent marine mammals. Anyone who violates the law could face a fine of up to 0,000.

“Today is a really good day for animals in Canada,” Green Party Leader Elizabeth May, who sponsored the bill in the House, said after it passed, according to the Huffington Post.

#Breaking: When we work together, good things happen.

This is a combined effort from @ElizabethMay, Senators Moore and Sinclaire, key Liberal and NDP MPs, NGOs, marine scientists and everyday people across Canada.#FreeWilly pic.twitter.com/RRPB91tT9y

The bill was first introduced in the Senate in 2015 by Wilfred Moore, who retired in 2017 before he saw it passed. Moore said it was stalled by Conservative senators who used procedural tactics to keep it from advancing. It finally passed the Senate in October of 2018 after three years of debate, then cleared the House fisheries committee in April of this year, CBC News reported.

“Nothing fantastic ever happens in a hurry. But today we celebrate that we have ended the captivity and breeding of whales and dolphins. This is news to splash a fin at,” animal rights group Humane Canada wrote in a tweet reported by CNN.

Nothing fantastic ever happens in a hurry. But today we celebrate that we have ended the captivity and breeding of whales and dolphins. This is news to splash a fin at. #bills203 #emptythetanks #cdnpoli Thank you everyone. pic.twitter.com/7j49YkEmpy

May said its passage was partly thanks to thousands of Canadians who wrote letters and emails in support of the measure. On two occasions, the Senate received so many emails that its servers crashed, Moore said, according to the Huffington Post.

“Canada is better for this,” Moore said.

There are only two institutions left that keep whales and dolphins in captivity in Canada: the Vancouver Aquarium and Marineland, a Niagara Falls zoo and amusement park. The Vancouver Aquarium only has one dolphin left and announced in January it would no longer keep the marine mammals captive, CBC News reported. Marineland, on the other hand, owns around 61 cetaceans: 55 beluga whales, five bottlenose dolphins and one orca. The park had argued the bill would threaten both its conservation efforts and its attendance, jeopardizing seasonal jobs.

When Conservative politicians stalled the bill in the Senate, May joked that the park had “managed to hold Conservative senators in captivity for a remarkably long time,” the Huffington Post reported.

However, the bill is unlikely to impact the park in the near future, because it includes an exception allowing facilities that already have animals to keep them. Marineland has five young belugas who could therefore live in captivity for another 50 years, Global News reported.

“Marineland will continue to provide world-class care to all marine mammals that call Marineland home,” Marineland said in a statement to Global News. “With our current mammal population, we will be able to operate decades into the future uninterrupted.”

“A person may move a live cetacean from its immediate vicinity when the cetacean is injured or in distress and is in need of assistance,” the bill reads, according to CNN.