Can We Ever Recover from the Murder of John Kennedy? 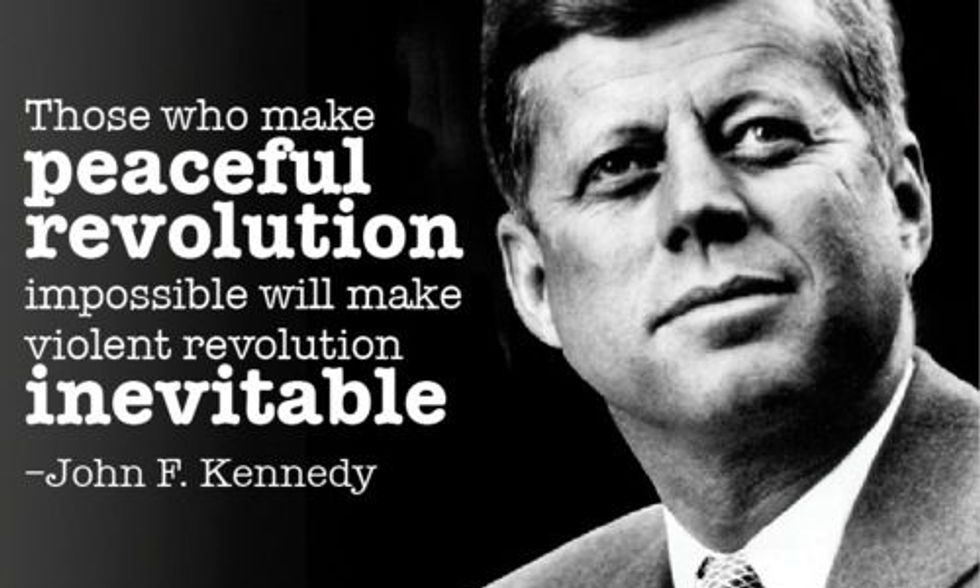 The images we ingest never cease to shape us.

Just 51 years ago, the head of a profoundly gifted young man was blown apart.

A few months earlier he’d given a speech that promised a new dawn.

He reached out to our enemies. He talked of going to the moon, of technological breakthrough and human promise. And he stopped the radioactive madness of atmospheric Bomb testing, a reason many of us are alive today.

We still debate what he might have done in Vietnam.

But since the war did escalate, and we know the horrible costs to us all, then the possibility that he might have gotten us out gnaws at our soul.

So does not being sure about who actually killed him.

And then there’s the horror of the moment itself. A fellow human, blown apart before our eyes.

It hurts to think about it. To write about it. How can sorrow not reign in our hearts over this terrible human image that so deeply defines us?

As a nation, we still feel the murder of Abraham Lincoln. Having won a Constitutional Amendment to end slavery, he was the only one to smooth the transition from civil war to progressive peace. We still pay for losing him.

And for the image of a good man, seated happily in a theater, next to his wife ... as a time for healing is unbearably shattered by a bullet to the head.

Russia never really recovered after Alexander II, a rare reformist czar, was murdered in 1881 while moving his nation toward a democratic constitution.

Michael Collins was a violent Irish revolutionary who turned to peace amidst a horrendous civil war.

Could he have ended it? All we know is the Troubles dragged on a ghastly seven decades after he was shot.

Then he was shot. And what is the outcome?

Around the world, names we don’t know. Faces we haven’t seen. Social movements crushed, freedoms lost, good people killed (too often by our own government) deadening the soul.

And who is next? Does all this mean activists of great heart and artists for social change inevitably court a death sentence?

It's long been clear, for a wide variety of reasons, that we cannot rely on "great leaders" to save our world for us.

But can our minds and souls ever recover from such horrible images repeatedly rammed into our brains?

Lynn Stuart Parramore has written with brilliance at AlterNet about the traumas we all face in today’s America.

In their wake, we are being poisoned by a ghastly, malignant class of zombie corporations somehow granted human rights and no human responsibilities.

They have gutted the Democratic Party and seized our government.

Their cancer is of injustice, cynicism, pollution and war.

Avoidable poverty, racism for the hell of it, a gutted democracy, eco-suicide for private profit, perpetual war for its own sake ... they all metastasize to feed the corporate tumor.

Another election has been bought, rigged, stolen and lynched. The internet is endangered. Likewise our civil liberties.

So do we turn our heads “until the darkness goes”?

Or do we face the unthinkable head-on, and refuse to blink (except momentarily—we all need a break from time to time) at what we see?

Somehow we have survived since John Kennedy was killed. Kids have been born ... and so have social movements ... along with many surprising twists of fate.

We are winning a culture war barely begun in 1963.

Silent Spring had just been published. An avid sailor, we don’t know how JFK might have interacted with a nascent environmental movement.

But born it was. A half-century later, Solartopian technologies are poised to green-power our economy. We have the means to survive in harmony with our Mother Earth.

But can we muster the political power to cure our corporate cancer?

Richard Nixon has come and gone. So have Ronald Reagan and George W. Bush.

Now “Hope and Change” join them in the compost of history. They came too cheap. They meant too little.

Apparently we have more lessons to learn, more inner strength to build.

The better angels of our souls now demand that we ask not what our planet can do for us ...

HARVEY WASSERMAN’S HISTORY OF THE UNITED STATES is at www.solartopia.org, along with SOLARTOPIA! OUR GREEN-POWERED EARTH. In 1960, he saw John Kennedy speak on the steps of the Ohio statehouse.