Can the Planet Sustain 7 Billion People Eating a Paleo Diet? 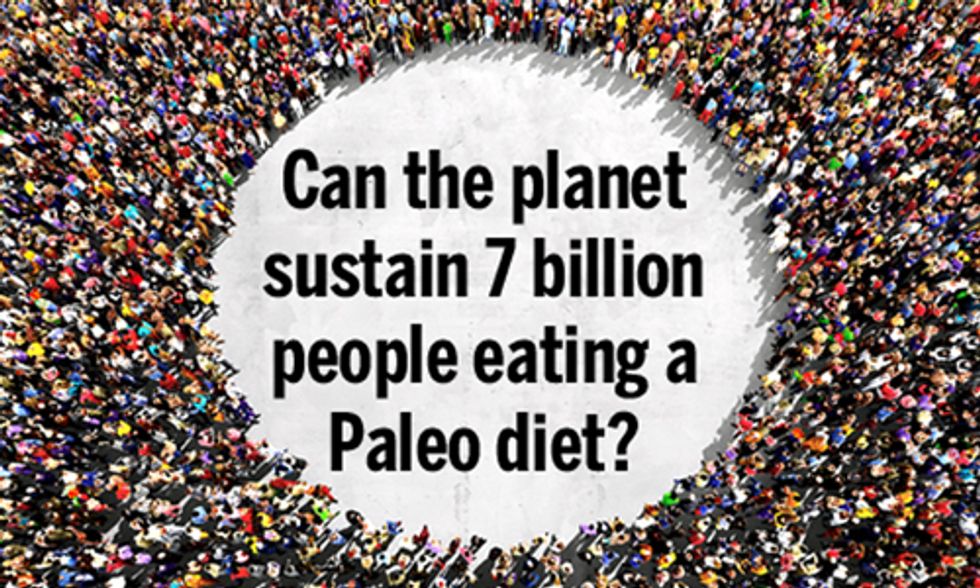 After decades of obscurity, Paleo is now one of the fastest-growing diet trends. A 2013 survey found that one percent of Americans eat Paleo, which is based on the premise that our diets should be based on animals and plants, the way we ate when we were hunter-gatherers. Bestselling books like Grain Brain have redeemed meat’s nutritional profile and convinced many people that their high-carb diets promote unhealthy levels of brain and gut inflammation. I count myself among the throngs of Paleolistas who have benefited from adhering, more or less, to its principles.

Paleos obviously don’t want to bring about ecological collapse, but they ignore the unfolding catastrophe at their own peril. Photo credit: Shutterstock

But what happens when Paleo really starts catching on, and millions of ill and overweight people eliminate grains and start eating animal protein with every meal? This leads to questions the Paleo community has yet to address: How many inhabitants of our small planet can regularly eat meat without despoiling the environment? And how do we decide who gets to eat Paleo and who’s stuck with grains and tofu?

Many Paleo advocates and consumers are no doubt aware of the environmental issues associated with factory-farmed livestock and commercial fishing—the enormous quantities of water, fossil fuels and pesticides needed to grow cattle, pig and chicken feed, livestock’s fecal contamination of fresh water, aquatic dead zones caused by pesticide runoff, the depletion and collapse of fisheries, heat-trapping methane emissions from the front and back-ends of farm animals … I could go on.

A study published in the Proceedings of the National Academy of Sciences found that global meat production uses one-third of the world’s fresh water and that more than 1.3 billion tons of grain are consumed by farm animals each year. In the Gulf of Mexico, aquatic dead zones from pesticide, fertilizer and manure runoff now total an area the size of Connecticut. Much of the runoff originates on heartland farms that produce corn for cattle feed.

Conventionally grown grains and vegetables are an ecological disaster too, but conventional meat production is substantially more resource-intensive, polluting and wasteful. The United Nations Environmental Programme cites meat production as one of the top three causes of ecological problems and one of the main drivers of climate change.

Many paleo advocates recommend eating organic, pastured, holistically grazed animal protein. Holistic grazing mimics the herd activity of wild animals, grouping the animals together to graze on perennial grasses for strictly controlled periods before rotating them to a new area. Though it has its skeptics, many ranchers have found that holistic grazing restores soil fertility and reduces their use of water, pesticides and feed grain. Meanwhile, emerging research indicates that holistically grazed grasslands sequester large amounts of carbon, more than negating the warming effect of the animals’ methane emissions.

Paleo guru Robb Wolf, producer of a weekly podcast and several books is, as far I can tell, the only prominent Paleo advocate who talks publicly about the sustainability of the diet. Wolf promotes pastured protein and denounces government grain subsidies that prop up factory-farmed meat. He understands that most Paleo wannabes cannot afford pastured meat and advises them to “do the best that they can.”

Wolf’s stance begs the question: How many people can afford pastured meat, assuming it’s even available at their local grocery store or farmers’ market? And what is the national and global production capacity for this kind of meat? An hour of Googling suggests that no one really knows, but my hunch is there’s not enough grazing land on the planet to feed enough livestock to put meat and eggs in front of all seven billion of us three times a day.

And there’s certainly not enough fish. According to the United Nations Food & Agriculture Organization 53 percent of the world’s fisheries are fully exploited, and 32 percent are overexploited, depleted, or recovering from depletion. More to the point, “The global fishing fleet is 2-3 times larger than what the oceans can sustainably support.” Most of the developed world now relies heavily on aquaculture, but farmed fish still requires feed made with wild fish.

For indigenous coastal communities, fish is their dietary and cultural heritage; we are taking it away from them by eating fish unsustainably harvested by commercial fisheries. What a sad irony is transpiring—Paleos are contributing to the destruction of the very way of life that inspired the Paleo diet.

The environmental impact of the Paleo diet has not escaped the notice of climate hawks such as Elizabeth Kolbert, chronicler of the tragic and terrifying mass extinction currently underway (The Sixth Extinction: An Unusual History). She argues in The New Yorker that “paleo’s ‘Let them eat steak’ approach is a [greenhouse gas] disaster.”

Another critic of meat-eating is Nicholas Stern, former World Bank vice-president and author of the widely-respected Stern Review on the Economics of Climate Change prepared for the British government. He advocates a vegetarian diet as part of a global strategy to prevent runaway climate change.

If there’s not enough animal protein to go around without cooking the planet, who should be first in line? Diabetics? Children? Celiacs? Cancer patients? Seniors? Pregnant women? Traditional hunters? A case could be made for any of these groups but, living in a free-wheeling market economy, there is one and only one basis for determining who gets the goods and that is—whoever can afford it.

I don’t know what the answer is. But I find it troubling to see the Paleo community gro —and evangelize—without discussing these issues. Anna Lappé, author of Diet for a Hot Planet, shares this concern: "Any diet that encourages high levels of meat consumption without acknowledging the reality of American meat production is irresponsible. Nearly all of the meat we find in supermarkets and restaurants in the United States today comes from industrial operations and, especially when it comes to beef, is the most energy-intensive, water-intensive, greenhouse gas-intensive way to put protein on your plate."

Paleo dieters are in it for their health … fair enough. But it’s critical to understand that human health is inextricably bound to the health of Earth’s ecosystems. Humans are but one link in the web of life, and that web is being polluted and stretched to the breaking point.

If Paleos want to eat a lot of meat and fish, I’d like to see them get engaged in figuring out how to sustainably produce it. Wolf, to his credit, serves on the board of the Savory Institute, a research and training center for ranchers wishing to transition to holistic management. The next edition of his cookbook will encourage consumers to choose fish that are lower on the food chain and, when I suggested he plug Seafood Watch, he promised to consider it.

Wolf incorporates sustainability issues into his talks but says his audience generally doesn’t want to hear it. “The vast majority want to know about protein, carbs and fat, so they can have abs and fit into their skinny jeans,” Wolf laments. He says that Paleo thought leaders tend to steer clear of the sustainability issue because it negatively impacts book sales. “It’s a buzzkill,” says Wolf.

Which brings me to Lierre Keith, author of The Vegetarian Myth, an important albeit uber-doomy book that gives new meaning to the word “buzzkill.” Keith, a vegan-turned-omnivore, argues that choosing a plant-based diet out of concern for the environment is a tragically misinformed choice based on ignorance of the critical role predators and farm animals play in the food web.

Keith is the first to admit that there’s not enough land to graze enough animals to feed everyone and adamantly calls for population control, a radical agrarian overhaul and the dismantling of patriarchy as the only hope for human survival. Like Wolf, she believes that livestock, properly managed, are essential for restoring topsoil that has been ruined by millennia of plowing and planting vegetables, grains and legumes. And the only way we can arrange to have animals stamping their organic manure into the earth is if we pay ranchers to raise and slaughter those animals for meat. Which brings us back full circle: Our food can and must be produced in ways that restore degraded ecosystems, but there isn’t enough of this kind of food, nor is there any large-scale movement in this direction.

Paleo’s sustainability contradictions aren’t limited to meat. Palm oil is a Paleo pantry staple. A while back, I sent an email to the Weston A. Price Foundation (WPF) criticizing their promotion of palm oil. (WPF doesn’t consider itself Paleo, but its nutritional advice is heavy on animal protein and palm oil). WPF President Sally Fallon Morell fired back a curt reply, referring me to the “Coconut Information Center." This website claims that the soy industry has duped environmental groups into believing that palm oil plantations are destroying rainforests when, in reality, the palm industry plays a “protective” role. As Earth Island Journal readers are aware, palm plantations spur deforestation just as surely as ruminants belch, but these are inconvenient truths for people with a myopic view of human health.

Paleos obviously don’t want to bring about ecological collapse, but they ignore the unfolding catastrophe at their own peril. Wolf says Paleos are slowly embracing the notion of sustainability and that he gets less pushback now than he did five years ago, but the community is still a long ways from seriously grappling with the unintended consequences of their diet. They should pull their heads out of the sand and start discussing these issues pronto. With so many great minds no longer addled by carbohydrates, they may hit upon some solutions.

Research assistance for this article was provided by Christopher Cook, author of Diet for a Dead Planet.