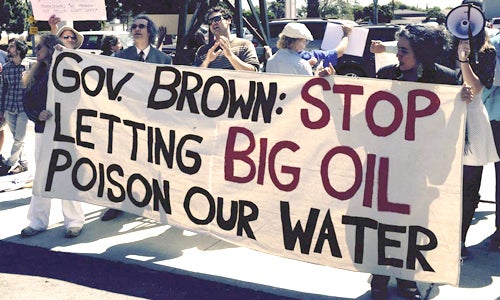 Hazmat suit-wearing demonstrators with Californians Against Fracking protested Tuesday outside and inside a state-run “aquifer exemption” workshop in Long Beach aimed at helping oil companies get federal permission to dump oil waste into California’s underground water. The protest started at Noon in front of the Holiday Inn Long Beach Airport, and continued inside the workshop when activists disrupted the proceedings by handing regulators bottles filled with black “frack-water” and asked them if they wanted to drink it. 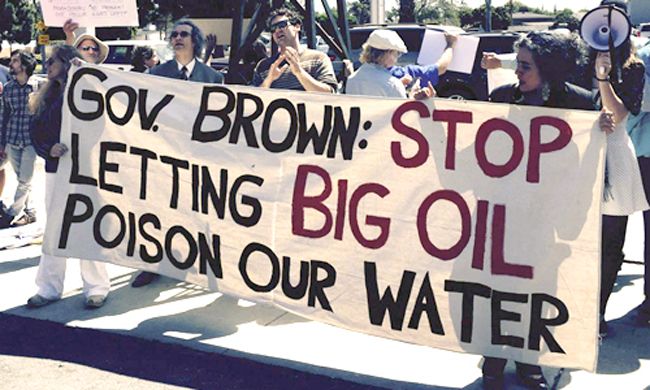 “Instead of this ‘Toxic Dumping for Dummies’ class, Gov. Jerry Brown’s regulators should protect our water from oil waste,” said Ash Lauth of Californians Against Fracking. “During this devastating drought, oil companies shouldn’t be allowed to use our aquifers as trash dumps for fracking flowback and other dangerous fluids.”

State Sen. Fran Pavley and other lawmakers called on Gov. Brown in a letter last week to “stop illegal injection into non-exempt aquifers” to protect California’s water from oil waste.

Oil regulators admit to wrongly issuing about 500 permits for oil industry waste disposal wells that violate federal and state law. Since then, the state has shut down just 23 of the hundreds of illegal wells that have dumped billions of gallons of hazardous oil waste into protected aquifers. More than 2,000 enhanced oil recovery wells are also operating illegally in protected aquifers.

Up to half of California wells are fracked, according a recent report from the California Council on Science and Technology. Oil companies’ own tests show high levels of cancer-causing benzene in flowback fluid from fracked wells in California. Those tests, mandated by a new fracking disclosure law, found benzene at levels as high as 1,500 times the federal limits for drinking water. Those documents also show that fracking flowback is typically disposed of in wastewater injection wells.

Produced water, which comes from fracked wells and conventional wells alike, also can contain high levels of benzene and other chemicals. State oil officials’ own study detected levels thousands of times the federal limits. In California, roughly 113 billion gallons of produced water is dumped into wastewater disposal wells each month.

After the illegal aquifer dumping was revealed earlier this year, more than 150 environmental and community groups filed a legal petition urging Gov. Brown to use his emergency powers to place a moratorium on fracking and other well stimulation techniques.

About 30 minutes into the Long Beach “aquifer exemption” workshop, about 15 Southern California residents disrupted the proceedings. With chants and banners, they reminded the state oil and gas regulators that it’s their duty as public servants to protect water for people of California, not to protect industry giants from pollution regulations. Here is a video recorded by Clark Davis from The Syndicate.info that captures the impact of the disruption.

Activists served the regulators with a pink slip, firing them on behalf of the People of California for “colluding with Big Oil to poison our aquifers, in this year of record drought, in this era of a warming planet.”

Walker Foley, an LA organizer from Food & Water Watch, said, “This outrageous workshop unifies California’s fracking movement to the national movement, as the US EPA flew in to help facilitate. Today we escalated. We put those bureaucrats on blast, and they can be sure that we will be back. No more nice, cordial hearings.”

While the regulators seemed unprepared to deal with the disruption, activists recited for several minutes: “Water can’t be poisoned for private wealth. We will fight for our children’s health.” The police politely escorted them out of the room as they chanted “We’ll be back!”