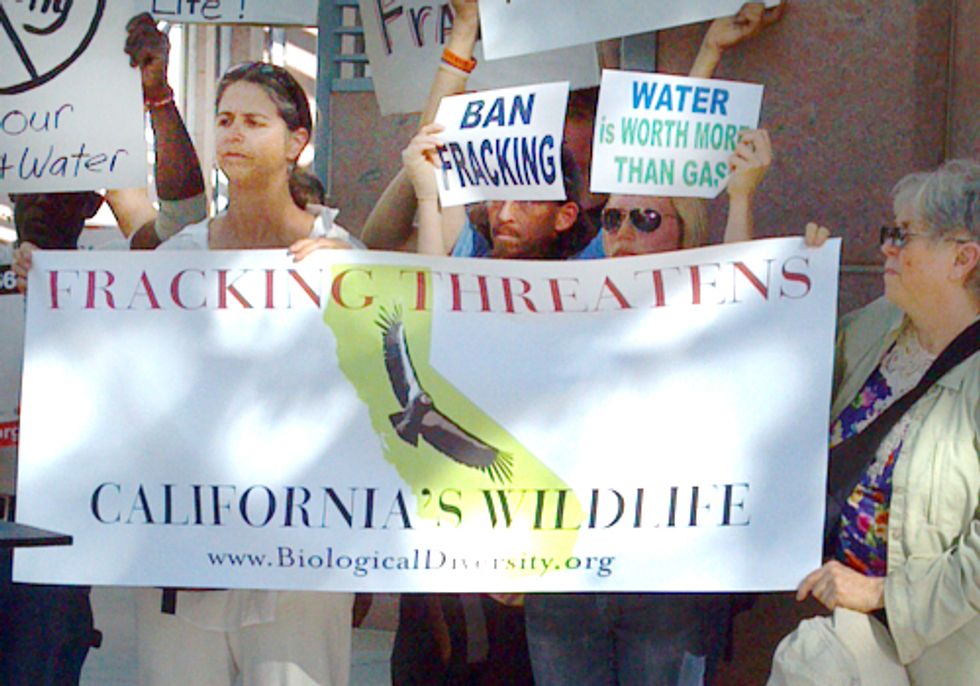 More than 150 Californians demonstrated against fracking on the evening of July 25 in downtown Sacramento, Calif. Photo by Center for Biological Diversity.

More than 150 Californians demonstrated against fracking on the evening of July 25 in downtown Sacramento, Calif. Protestors from as far away as Culver City spoke out against this controversial oil and gas drilling technique, which is increasingly common in California, at a rally outside the state Department of Conservation’s final fracking workshop.

Inside the workshop, physicians, homeowners and environmental advocates told state officials that fracking, which is currently unregulated and unmonitored in California, could pollute the state’s water and air and threaten human health and endangered species.

A homeowner from Santa Maria expressed grave concerns about the health threats he and his wife may face from fracking in the oil wells being drilled less than a mile from his house. A physician from the Culver City area spoke about the carcinogenic properties of benzene and other industrial chemicals used in fracking fluid.

“The fracking boom is a significant threat to California’s environment and public health,” said Rose Braz, climate campaign director with the Center for Biological Diversity. “Many people know that fracking can foul the water, pollute the air and threaten endangered wildlife. But fracking’s dirty little secret is the amount of greenhouse gas pollution it emits. If oil companies frack the 15 billion barrels of oil in the Monterey Shale, we’ll be lighting the fuse on a carbon bomb that will shatter our state’s efforts to fight global warming.”

State officials told the crowd that draft fracking regulations could be released for public comment in about two months. California lawmakers are also debating legislative efforts to regulate fracking, but many speakers at yesterday's event, including Braz on behalf of the Center for Biological Diversity, said that fracking should simply be banned.

Fracking is currently taking place in at least nine California counties, from Glenn County in the north to Monterey County on the coast to Los Angeles County in the south. Those nine counties are home to more than 100 endangered and threatened species of plants and animals, including the iconic California Condor and the San Joaquin kit fox.

The Center for Biological Diversity is a national, nonprofit conservation organization with more than 375,000 members and online activists dedicated to the protection of endangered species and wild places.