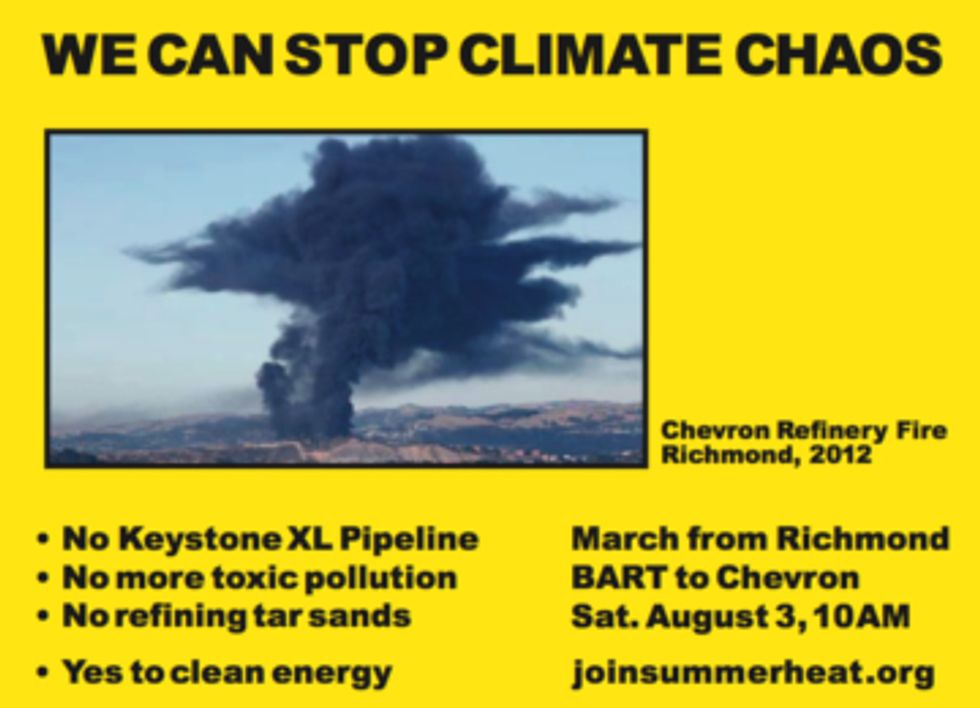 On Aug. 3, the one-year anniversary of the explosion and fire at Chevron’s Richmond, CA, refinery in 2012, a coalition of 350.org groups and Richmond-based environmental justice organizations will protest Chevron’s and Big Oil’s environmental crimes and their drive to process more dirty tar sands and fracked crude, and call for a just transition to a clean, renewable energy economy.

The coalition—Richmond Progressive Alliance, Asian-Pacific Environmental Network and Communities for a Better Environment, as well as the California Nurses’ Association and other local unions—will march, rally and participate in nonviolent civil disobedience at Chevron’s Richmond refinery, and hear testimony from survivors of the disaster. Climate activist Bill McKibben and other community leaders, including Richmond Mayor Gayle McLaughlin, will address the crowd

The Chevron Richmond Refinery is a major public health hazard. The explosion and fire on Aug. 6, 2012 nearly killed 19 workers and sent more than 15,000 locals to the emergency rooms with respiratory problems, nausea and other conditions. The refinery still remains a disaster waiting to happen. The sulfur-corroded pipes, which caused the 2012 explosion, have not been replaced. The pipes are held together with more than 2,000 clamps. As reserves of light sweet crude have dried up, Chevron has shifted to heavier, more sulfur-laden crude from other sources, including the high-sulfur tar sands crude from Canada. The high sulfur content of this heavy crude is what caused the corrosion of the pipes at Chevron Richmond refinery.

What Dirty Tar Sands Crude Oil Means for Richmond, CA and the Planet

Manipulation of Local and State Leaders: California has a low-carbon fuel standard (AB 32), blocking the sale of gasoline refined from carbon-intensive dirty crude oil, like Canada’s tar sands. However, the law, as it stands, does not forbid the refining of this crude to be shipped elsewhere. The oil industry, led by notorious Texas-based Valero, is mounting an aggressive campaign to invalidate clean-fuel policies in the state.

Big Oil’s objective is clear: manipulate our local and state government leaders to approve the refining of tar sands and other dirty crude oil in California, no matter the cost to the environment, the economy and our quality of life. Blocking such approval and getting legislators at all levels to recognize the dire threat posed by tar sands and fracked crude—and the continuation of the carbon-fuels economy as a whole—is a key goal of the Aug. 3 action.

“Chevron is behaving like an international criminal corporation, but this behavior in our community is masked by giving chump change out to local nonprofits and community leadership to keep them quiet and out of the debate,” said Andrés Soto, organizer with Communities for a Better Environment.

Climate Crisis and Environmental Justice as a Moral Issue: Grassroots movements, community service groups and faith-based organizations in California and across America have partnered to advance the moral imperative of ensuring a decent quality of life for everyone living today, preserving it for future generations and creating a global economy based on clean, safe, renewable energy.

Rev. Kurt A. Kuhwald, Unitarian Universalist minister and professor at Starr King Seminary in Berkeley, sums it up perfectly when he wrote, “The time of denial and retreat is at an end. The time for a radical commitment to life and this planet is at hand. Every one of us is needed.”