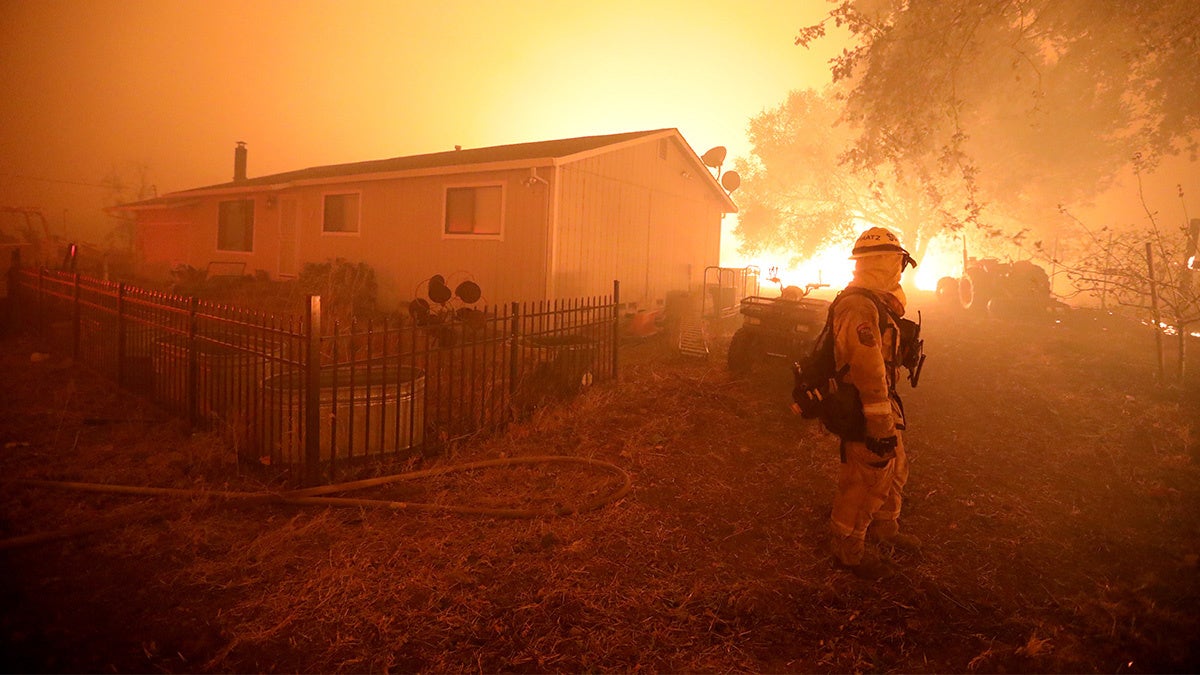 The largest, the Kincade Fire, had burned more than 54,298 acres in Sonoma County as of Sunday night and forced more than 180,000 people to evacuate. In Southern California, the Tick Fire forced nearly 50,000 to flee their homes, though they have since been allowed to return, according to The Guardian. At the same time, more than two million people have lost power as utility Pacific Gas and Electric (PG&E) implemented preventative outages due to high winds.

“We are deploying every resource available, and are coordinating with numerous agencies as we continue to respond to these fires. It is critical that people in evacuation zones heed the warnings from officials and first responders, and have the local and state resources they need as we fight these fires,” Newsom said in the emergency declaration.

The Kincade Fire is only five percent contained, according to a Sunday evening update from the California Department of Forestry and Fire Protection (CAL FIRE). It has destroyed 94 structures and damaged 17.

Almost the whole of Sonoma County was impacted by evacuation orders, according to The Guardian.

Firefighters are now working to prevent the blaze from crossing Highway 101 and burning an area that hasn’t seen a wildfire since the 1940s, the Los Angeles Times reported. If it does cross the highway, the fire could threaten agricultural land and old-growth redwoods.

The blaze has been fueled by historic winds that gusted 90 miles per hour Saturday night, The Guardian reported.

“I’ve been in the business 30 years and I’ve never seen anything like this,” San Francisco National Weather Service forecaster Steve Anderson told The Guardian. “Just the sheer intensity and the sustained duration of the winds. Not only does it carry sparks at least a mile but winds at these speeds pushes embers along the ground,” he said.

The high winds prompted PG&E to shut off power to 960,000 homes and businesses in Northern California as of Sunday night, The New York Times reported, which means nearly three million people are now in darkness. More than 100,000 additional customers lost power through unplanned outages also caused by high wind.

“[W]hat we do is not popular,” PG&E Chief Executive Andy Vesey said during a Sunday night press conference reported by The New York Times. “I will not tell you that people congratulated us. People are angry.”

The utility said on Twitter that it would begin restoration work for some areas Monday, but might need to institute more planned shutoffs Tuesday and Wednesday because of more high winds.

In Southern California, meanwhile, firefighters made more progress on the Tick Fire, which was 70 percent contained as of Sunday night, NPR reported. The fire has burned 4,600 acres and destroyed or damaged around 50 buildings. Around 1,000 firefighters are still working in the area to make sure the blaze stays contained. Santa Ana winds are forecast to pick up Sunday and Monday, and reach 50 to 70 miles per hour Wednesday and Thursday.

Wildfires are a natural part of many California ecosystems, but the climate crisis has made them larger and more extreme, National Geographic explained. That’s because California has warmed by about three degrees Fahrenheit in the past 100 years, compared to the global average of around one degree. Warmer air makes plants drier, which means more fire fuel.

“All else being equal, in a warmer world, vegetation is going to be drier, even in a place like California where vegetation is usually dry by autumn. You can still make it drier,” University of California, Los Angeles climate scientist Daniel Swain told National Geographic.

One Tick Fire evacuee has experienced that change first hand. Brenda Taylor told The Guardian she had evacuated eight or nine times in the past 20 years because of fires.

“It has become normal for us,” she said.