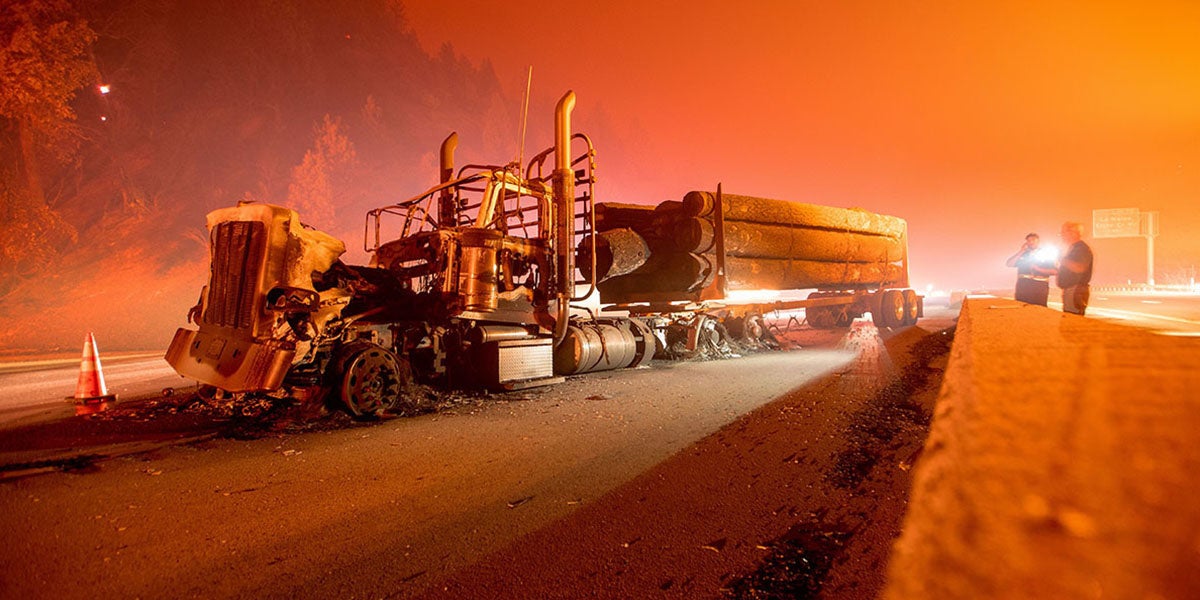 Another explosive wildfire ignited in California Wednesday, shutting down about 45 miles of the major highway Interstate 5 near the Oregon border, The Associated Press reported.

Fire officials told The Associated Press that the fire was started by humans, but they did not say if it was an accident or arson.

That initial spark was then fueled by “mixed conifer and decadent brush with no recent fire history and heavy dead and down surface fuels,” USA Today reported that InciWeb said.

The fire broke out in Shasta County just six days after the deadly Carr Fire that ravaged the area was finally contained, USA Today reported.

That fire killed eight people and destroyed more than 1,600 structures, devastating the town of Redding, California in July.

A few cabins were under evacuation orders.

The city of Dunsmuir, which is around 15 miles from the blaze, was issued an evacuation warning.

But the fire did cause chaos on I-5, causing truckers to abandon 17 big-rigs. Lt. Cmdr. Kyle Foster of the California Highway Patrol’s Mount Shasta office told the Los Angeles Times that four trucks lit on fire and that firefighters, forest workers and other truckers helped the affected drivers, according to The Associated Press.

“There’s vehicles scattered all over,” Brandon Vaccaro with the California Department of Forestry and Fire Protection told the Redding Record Searchlight, as The Associated Press reported. “Whatever occurred here was probably pretty ugly for a while.”

Firefighters told The Los Angeles Times that the low humidity and dry brush in the area made it hard for them to fight the fire overnight, when cooler temperatures usually make firefighting easier. They said they battled flames 300 feet high.

The firefighters also said the fire was aided along by warm weather and strong winds, and both conditions were expected to continue Thursday.

The fire comes a little over a week after California’s fourth annual Climate Change Assessment warned that intense heat waves and wildfires would increase 50 percent in the state by 2100 if nothing is done to curb climate change.