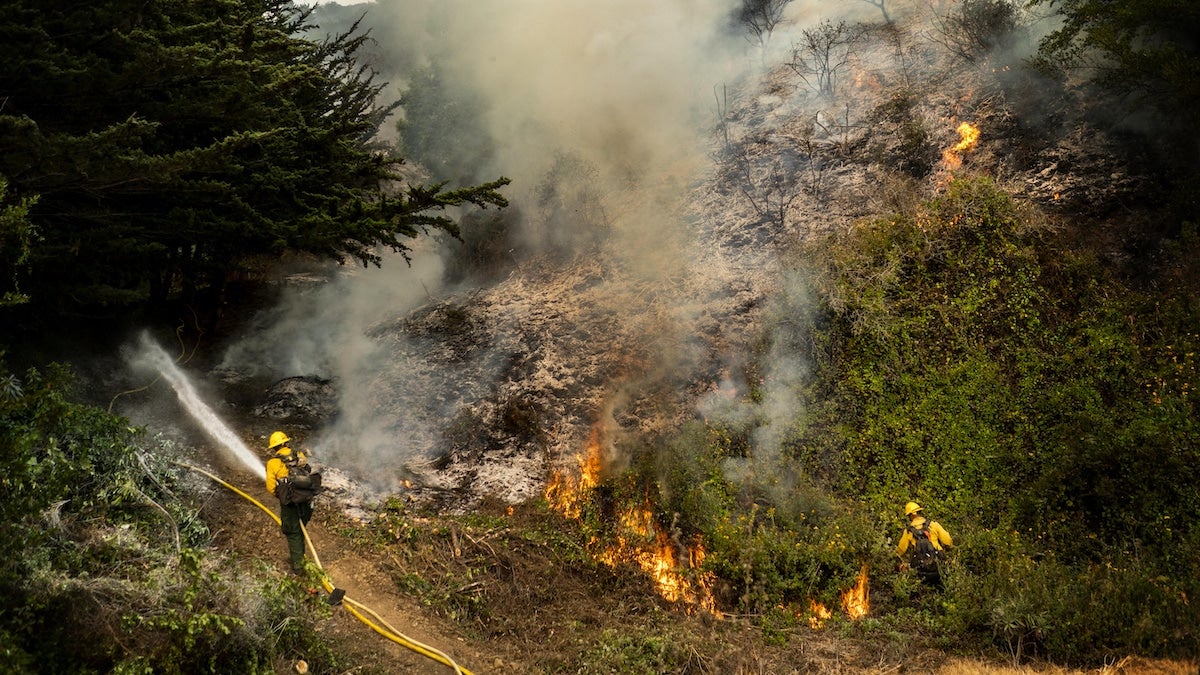 One of the many wildfires raging through California has destroyed a sanctuary for endangered condors, and the fate of at least four of the birds remains unknown.

The Dolan Fire on Friday scorched an 80-acre condor sanctuary operated in Big Sur by the group Ventana Wildlife Society, the San Jose Mercury News reported. In the process, it took out a remote camera that was monitoring a condor chick nesting in a redwood about one mile away. Ventana Wildlife Society Executive Director Kelly Sorenson said the baby’s parents flew away as the fire advanced.

“We were horrified. It was hard to watch. We still don’t know if the chick survived, or how well the free-flying birds have done,” he told the San Jose Mercury News. “I’m concerned we may have lost some condors. Any loss is a setback. I’m trying to keep the faith and keep hopeful.”

The imperilled chick, named Iniko, was born April 25. Its name is of Nigerian origin and means “born during troubled times,” according to the Ventana Wildlife Society website.

In addition to Iniko, at least four other wild condors remain unaccounted for, and it is not yet safe for biologists to search for them because the fire continues to burn, Sorenson told the San Jose Mercury News.

Still, there is reason for hope. The Ventana Wildlife Society pointed out that, in the last 20 years, five out of six condor chicks sheltering in nests in the path of wildfires survived. This is because the redwoods the birds nested in protected them from the flames.

Sorenson told NPR that he had been pleasantly surprised when a condor chick survived another Big Sur fire in 2008.

“We were convinced there was no way the chicks could survive the fire,” he said. “Sure enough, a chick survived and we named it Phoenix.”

The Dolan Fire ignited last Wednesday in Los Padres National Forest, according to The Associated Press. It is one of hundreds of fires raging in the state that have so far killed at least seven people, burned almost 1,300 structures and forced around 170,000 people to flee their homes during the coronavirus pandemic.

A man has been arrested as a suspected arsonist in connection with the Dolan Fire specifically. However, University of California, Los Angeles scientist Daniel Swain said the climate crisis means California’s wildfires are more likely to grow larger and spread more quickly once they start.

“What happens when they start burning, what is the character of those fires, and is it changing?” Swain told E&E News. “The answer is yes.”

The Dolan Fire has spread to more than 20,000 acres and is 15 percent contained, according to InciWeb.

The California condor has so far been a conservation success story. In the 1980s, there were only 22 of North American’s largest birds left in the wild, according to The Associated Press. They were captured and placed in a captive breeding program that began re-releasing the birds into Los Padres National Forest in 1992.

There are now more than 100 condors in Central California and around 340 in the wild altogether. The breeding program celebrated the birth of its 1,000th chick last summer.

The Ventana Wildlife Society has used its sanctuary to release birds raised in captivity back into the wild since 1997, according to the San Jose Mercury News. The fire destroyed pens, a research station and other facilities, and the non-profit is now raising 0,000 to rebuild.