California is likely facing another year of water woes. The Sierra Nevada snowpack, which supplies up to a third of California’s water, is exceptionally meager this year. Experts found around half as much snow on the mountains as they typically would in early April, when the snowpack is historically most voluminous.

Not only does the dwindling snowpack put California’s water supply at risk, it also portends more floods, wildfires and mudslides over the coming year. This is precisely what makes climate change so dangerous. Even small changes in weather can have cascading effects, multiplying the risk of natural disaster.

Climate change is depriving California of needed precipitation, and it is also causing more precipitation to come down as rain instead of snow. The result is that, over time, the Sierra Nevada see less and less snow, with consequences for the Golden State. Every spring and summer, that snow melts, feeding the streams and rivers that supply California’s reservoirs. Less snow means less water for farms and cities. Making matters worse, warmer temperatures mean that snow melts in late spring and early summer, leading to shortages later in the year. 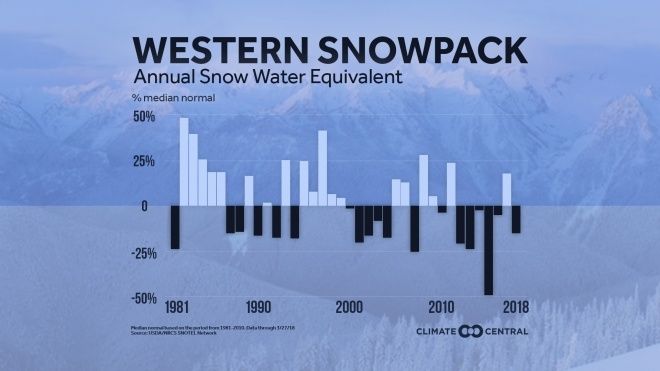 When more precipitation falls as rain instead of snow, it can lead to flash floods.

More abundant rainfall can lead to flash flooding, as large volumes of water runoff feeds into streams and rivers, causing them to overflow. In February, 2017, for example, heavy rainfall caused the San Joaquin River to spill over, leading hundreds of people to evacuate. The San Joaquin River originates in the high Sierra, which is seeing more precipitation come down as rain instead of snow in the winter months.

Diminished snowpack drives up the risk of wildfires.

The Sierra Nevada is harboring less snow, and that snow is melting faster, which is leaving the mountains without water during the warmer months. Hot weather and dry conditions up the risk of wildfire. The Sierra Nevadas have seen more and more wildfires in recent years. An October 2017 wildfire in the Sierra Nevada foothills, for example, killed four people and displaced thousands more. 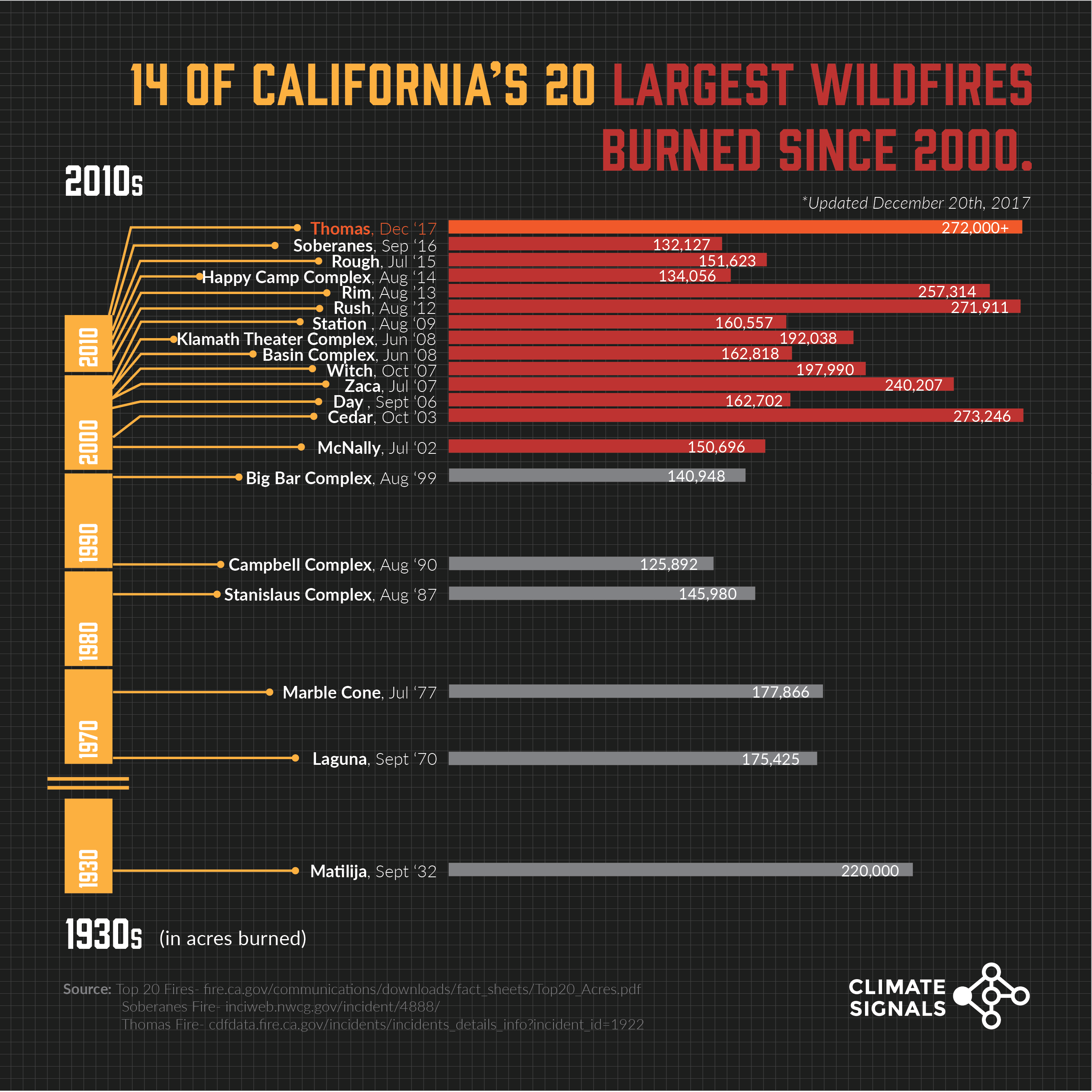 The roots of trees and shrubs hold soil in place. When wildfires burn up alpine vegetation, the roots needed to retain that soil shrivel up. Then, when rain returns in the winter, it will carry loose soil down the mountain in mudslides. A series of February 2017 rainstorms produced mudslides along the Sierra Nevada, closing highways and, in a few cases, carrying cars off the road. 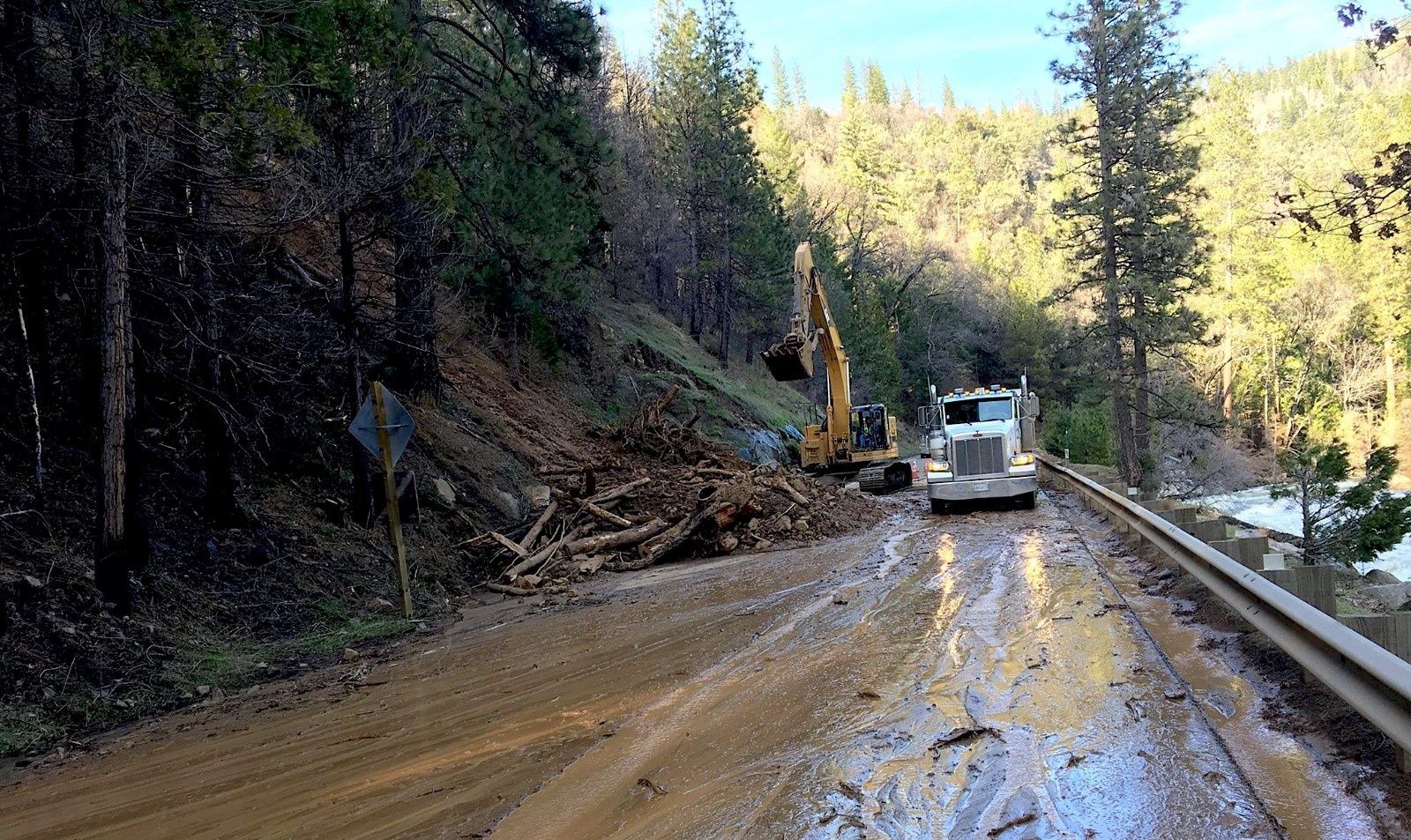 Workers deal with the aftermath of February 2017 mudslides. Caltrans

Blame it on climate change.

The root cause of all this mayhem is climate change. Carbon pollution is trapping heat, which is cooking the planet. Warmer water temperatures in the Pacific Ocean are giving rise to atmospheric rivers that deliver rain—instead of snow—to the Sierra Nevada. Heavy rainfall threatens to melt what little snow gathers on the slopes. This has consequences for the entire state, as reduced snowpack fuels drought more broadly, yielding wildfires and mudslides in coastal areas as well as in the mountains.

In a recent op-ed for the Los Angeles Times, UCLA climate scientist Alex Hall and science communicator Katharine Davis Reich warned, “In simple terms: We’re going to lose a lot of snow to climate change. Equally worrisome, California’s water infrastructure is not resilient enough to make up for the loss.”