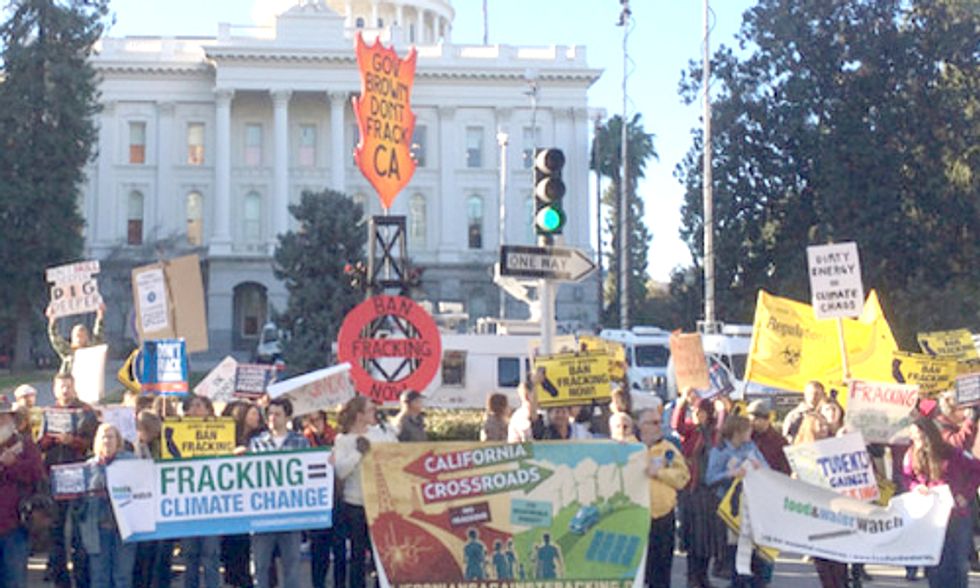 With fracking bans or moratoriums in Los Angeles, Beverly Hills and Santa Cruz County, California seemed prepared to put a halt to the dirty energy practice across the state.

The state Senate rejected a measure that would have placed a moratorium on hydraulic fracturing, acidizing and other forms of oil and gas development. According to the Sacramento Bee, opponents of Senate Bill (SB) 1132 believe that SB 4, approved last September, made the moratorium legislation a waste of time.

Of course, the environmental groups who deemed SB 4 a "half bill" would beg to differ.

Though cities and a county in California have passed fracking moratoriums or bans, the state did not hold up its end of the bargain. Photo credit: Californians Against Fracking

"The vote is disappointing but not completely unexpected, given that the oil industry has spent a whopping $15 million on lobbying activities to defeat the bill and buy influence in Sacramento," Californians Against Fracking said in a joint statement with 350.org, Center for Biological Diversity, Center on Race, Poverty and the Environment, CREDO Action, Environment California, Food & Water Watch and Oil Change International.

"State lawmakers will continue to face growing concern about fracking pollution from voters in their communities. Californians Against Fracking calls on Governor Brown to protect California’s water, agriculture, public health and climate by declaring a moratorium on fracking now. If Governor Brown is serious about fighting climate change and its severe impacts, including droughts and fires, then he must show real leadership and stop the fracking now."

Two other organizations, the Natural Resources Defense Council and Sierra Club, were particularly troubled by the vote since they conducted a poll of California residents, with more than two-thirds showing support for a moratorium. The support held up across political party lines, too, as moratorium-supporting Democrats, Republicans and Independents all outvoted opposers.

“Californians have made it clear they do not want to rush ahead recklessly on fracking," said Damon Nagami, a senior attorney for the NRDC. "Why risk the health of our children, contaminated drinking water, more air pollution, man-made earthquakes and further strained water supplies in the middle of an extreme drought? We need a time-out on fracking to give the state time to do its due diligence and ensure the health of our residents is not squandered to satisfy oil industry greed.”

“We have the momentum, this issue’s gone viral nationally, and it’s just a matter of time before the dangers of fracking prompt people to put it on pause until its safety can be established," she wrote. “When the impacts on the public of a for-profit endeavor are unknown, we try it out first in minority neighborhoods—assuming low vigilance and the need to bring in jobs makes safety irrelevant.

"But we’ve put big industry on notice: That ploy won’t fly forever. People’s neighborhoods aren’t fodder for fracking, environmental justice must come, and one day soon the vote to refrain from polluting for profit will prevail!”